I have way too much information and far too little time to get it across to you, my blog patron saints. It would be impossible to convey all this valuable information if I had seven hours to write. So instead, I will do it in ten minutes. Rather I will claim to do it in ten minutes, and let your impressive feedback flow. Sit back and relax.

Our top story of the day is the Sake Festival. Citizens of this great empire come together as one on the second weekend in October and pay whatever fare is necessary on the Shinkansen to arrive in the small country town of Saijo. Guess what? The epicenter of this ritualistic event in alcohol is a one minute walk from my apartment. Set your calendars – October 7th and 8th, 2006. Saijo, Hiroshima Prefecture.

I exaggerated just a little – although many people come to the Sake Festival to do nothing more than drink, drink, drink, throw up, and drink some more, it is also a rich cultural experience. More than 200,000 people visited Saijo last year, doubling the population of the area, and bringing with them stories, merchants, and friendly encounters.

Saijo is no stranger to tourists, being both the resting place of the Asahi beer brewery, the annual Sake Festival, and most recently the location of the University of Hiroshima.

Hanko
Name stamp, for those of you currently abroad. A hanko or inkan is used in place of signatures in Japan. For foreigners, the legal precedent of inkan is still up in the air. Many foreigners can live in Japan without needing one of these trademark Japanese items, but there have been some instances where bureaucracy and governmental setbacks require foreigners to register one. For example, they are used to confirm incoming packages, apply for a bank account, get a cell phone, connect to the internet (installation only, obviously), and so on. One AEON teacher applied for a bank account, only to be rejected a week later because “he didn’t use his inkan.” Supposedly this was a rule at this particular branch of the bank, and not the bank as a whole. It can happen like that in Japan.

So how do you get this mysterious name seal? Easy – ANYWHERE. ¥100 stores, Fuji Grand, You Me Town, specialty stores… It depends on the quality you want. The stores specializing in inkan can charge up to ¥30,000 for a custom-made stamp with the holder and ink pad. Insane, but some people do pay for it; it’s a once-in-a-lifetime need for some.

There’s also the issue of whether to register the inkan at the local government office. You can get by most of the time using an unregistered inkan (called a mitomein, I know, they have names for everything), at least Japanese people can. But it strikes me that a foreigner wouldn’t be able to pull this off that easily – obviously, anyone who hands you a document ready to be stamped knows you have no Japanese name. The way to get around this is simply register your hanko; the registered name is called Jitsuin. Get it registered and pay ¥200 for a certificate of registration and you’re set for the time being.

Now just to decide if I want to use Kanji or Katakana for my name. You always use your last name for the jitsuin, but foreigners can use Katakana if they so choose. 雷途 or ライト? Both are raito in my case, but my Kanji name means “Thunder Road”. Thank you Springsteen.

The Japanese Value of Freshness
With regard to food, the Japanese have impeccable taste. No wonder so many people are in shape and lean – the quality of food is superb. For example, freshness is valued above all other qualities. The reason behind this is two-fold: one, the high humidity of Japan as a tropical nation increases the presence of mold in all food. Two, it’s just the Japanese way. This applies to meat, fish, fruit, and vegetables. To illustrate, foods in department stores are marked down in price about an hour before closing because the stores will absolutely not sell them the next day. Thus, if you time your shopping right, you can save several thousand Yen each month. Luckily we dirty Americans do not have the same regard for the redness of meat. I’m from a state that developed a method of adding sauce and spices to rotting meat to make it edible. Have you guessed that? BBQ.

Exercise and Local Gyms
I’m currently a member of the Saijo Center YMCA. With a few exceptions, the local YMCA is generally the best choice in gym for those who work out regularly. You can purchase a monthly membership for about ¥7,000. No major difference between the YMCA gym or a major US chain like Gold’s, just be careful to take off your shoes as you enter the locker rooms, and before using the exercise mats.

This piece of exercise equipment did catch my attention. Apparently “riding the bull” has become quite popular for cardiovascular exercise. 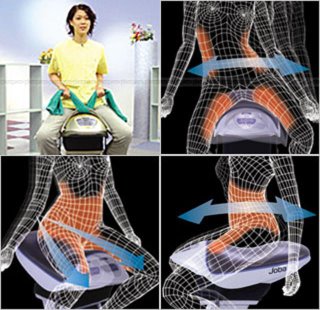 Laundry
90% of all people in Japan dry their laundry outside on a clothesline. It doesn’t matter where you are – Hiroshima, a country town, Tokyo. Wherever you are in Japan, I guarantee you are within sight of someone’s laundry. During the rainy season in June and July I found this to be more difficult than usual on some days, and resorted to a commercial dryer. Unfortunately this costs ¥100 for every eight minutes of use, so it can get a little expensive. If you’re willing to set aside Yenage, as I call it, each month, it can be a welcome luxury. 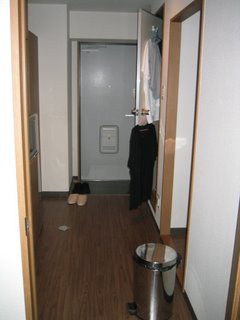 Take note of this route – the road from Saijo Station to campus area and back, going around one of the mountains. Highly recommended if it’s not raining. Just get off the JR train and you are ready to go.