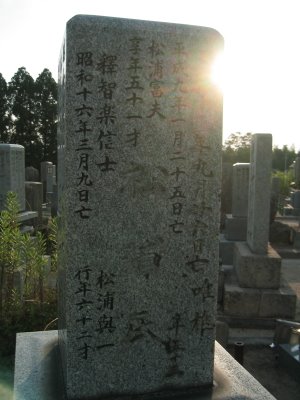 Yeah, that sums it up. I’m tired, but I still have time for the heroes. Apparently there’s a live Japanese version of The Phantom of the Opera playing in Hiroshima. That’s something I have to see. In the meantime, however, funds are running low – apparently the company deducts two months’ rent from your first paycheck, so I might have a little trouble getting into Fukuoka over Obon vacation; those should be some interesting stories. But, back to fun – here’s a rundown of some decent spots in Hiroshima. You can take the trolley from Hiroshima Station over to Kagarekawa (the nightlife district) for only ¥150. Take the #1, #5, or #6.

Molly Malone’s
Your standard Irish pub, expect for the fact that it happens to be in the middle of Japan. Quite a nice escape for the foreigner. I went with two English guys, and they felt right at home. Guinness goes for ¥900 a pint. You can usually expect a large number of foreigners there, with the occasional all-Japanese group that feels like doing something foreign. Definitely friendly, not shady. I give it my personal approval, which means nothing to you, so just drink there anyway.

G’s Bar
Kind of hard to find but email me if you’re in the Hiroshima area. G’s Bar can also be expected to have a huge foreign presence, but the bar style is very country – mounted heads and fake rawhide seats. This is a small bar/karaoke bar, with two video screens set up, microphones free for paying customers. Not too bad, but not the best place to hang out.

Mac
Mac is one of the big gaijin bars in Hiroshima next to Shack. It features a whole wall with nothing but CD’s, a dancing area, and a decent bar. Also a little small for my taste, but a good place nonetheless.

El Barco
I’m kind of split about this one. El Barco was raided by Hiroshima police last month and shut down for a little while due to a lack of a club license. When I was first there it was completed dominated by military guys from the US base and eastern European girls… yeah… looked a little suspicious. But if you get there during peak hours the scene is a little better – crowded, but an equal mix of foreigner and Japanese, guys and girls, and a cover of ¥500 (drink included).

One of the British guys I met on Saturday was a long distance runner as well, and we both may be headed to the Tokyo Marathon in 2007. Will be sure to keep everyone updated on running trails in the area – I’m headed to Hiroshima tomorrow and will see if the area near a few shrines would be a good place.

Incidentially, if you haven’t gotten your inkan, hanko, or jitsuin yet, get one in KATAKANA, not Kanji. Getting a Japanese name stamp in Kanji has one advantage – when your paperwork is passed along you aren’t given any sort of “foreign treatment” because they don’t know you’re foreign. But in general, having a Kanji name is equivalent to a Japanese person asking you to call him Bob or Jake. It’s just you, trying to be too Japanese. Katakana on the other hand is appreciative of the culture, able to be read by Japanese people, and still maintains your “foreignness” for the world to see.

Later this week I’ll have a section about useful Japanese when getting a haircut and what to do if you’re attacked by three hundred beetles; I haven’t seen too much information about that online. The 61st anniversary of the bombing of Hiroshima is at 8:15 AM next Sunday – peace be with you.