The izakaya: a cornerstone of Japanese culture. The place where co-workers can relax after a hard day’s work, slip off their shoes, and do nothing but eat, drink, and rant about their managers. Emphasis on drinking; drinking in Japanese is an integral part of the culture. I know I’m one of the minority in America, but I really don’t drink too often. When someone accuses you of drinking the night before in America, it might imply that you’re a drunk, a bad worker, socially lacking, or you have no respect for yourself. Yet if you are asked if you will go drinking one night in Japan, it’s a very casual question. I don’t know if there are alcoholics in Japan, but drinking to the point of drunkenness is very widespread. More than widespread: it’s not looked down upon, but merely a part of the culture in which you are expected to participate. How often you go out drinking might even be revered to a point; it proves you have friends, are socially active, and not afraid to have fun. Whereas a flat refusal to go out for drinks after work would be considered anti-social and rude (of course there are reasonable excuses among friends).

Enter the izakaya (居酒屋). Imagine if you will: it’s Saturday night. You’ve finished with work for the weekend. You’re comfortably tired, hungry, and thirsty. A co-worker suggests going out to dinner to celebrate a new employee, an employee leaving, a friend visiting, etc. Accept the offer, no matter how much it costs – the full dining experience of a nice izakaya is something you should definitely experience at least once while in Japan.

So how do you find one, if you’re new to town? Not all, but most izakaya have a latern hanging outside with the Kanji symbols for “izakaya” (good ones to memorize). Although the building itself is technically a bar, it is a special kind of bar, offering many dishes of food served in the traditional Japanese style – sitting on cushions or tatami mats over a low table. I suppose you could call that Roman style as well, if you choose to recline while you eat.

What to do, what to do…? Any izakaya that’s worth it’s weight will have you remove your shoes at the entrance. Then you and your friends (don’t go to an izakaya alone) will be escorted to the low tables. If you have enough people, you might be given your own set of tables to dine upon. However, if you are a small group (two or three people), you could be seated with other patrons at the same table. This is very common, and you don’t have to talk to them if you feel awkward. However, if you’re a foreigner enjoying the pleasures of the izakaya with a friend, you probably should be prepared for some casual conversation.

First step – what do you want? Izakayas are famous for offering both nomihodai (all you can drink), tabehodai (all you can eat) and nomitabehodai (both); this gives you the option of eating and drinking as much as you want over a given period of time for a fixed price (very useful). Choose nomitabehodai, trust me. Then order drinks. This is common as many people come to izakayas for celebrations of every kind. Wait for all of them to arrive, and begin the kampai (cheers). Before any main dishes arrive, you usually receive some kind of appetizer like sugar peas or salad, both to be eaten with chopsticks.

Lightning crashes, and the main event begins. Prepare yourself, whet your appetite, and share with everyone. All food at izakayas are served family style – the waitstaff will give you a large plate with many servings; use your chopsticks to move those servings onto your personal plate. So what food can you expect first from an izakaya, the best place to dine in all of Japan? The epitome of the Japanese cultural experience? Ok, too much hype, here it is: sashimi 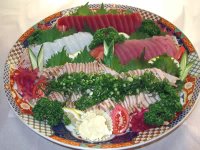 Sashimi (刺身) is fish. A variety of fish, be it salmon, bream (鯛), tuna, squid, anything. Although this is essentially the focal point of any Japanese meal, being the most desired and tasty food, it is served at the beginning so your palate will not be dilluted by the other less-flavorful dishes. Let me clarify: sashimi is raw fish, sliced into several small portions that you can pick up with your chopsticks and steadily devour. For extra flavor (if you like your raw fish taste with a little seasoning), sashimi usually comes with a dipping sauce and wasabi. Wasabi looks completely harmess – just a small green paste next to the fish. However, it is incredibly potent, and amazingly spicy. Japanese customers usually just add a few droplets to the fish for flavor, and even that small amount gets you to burn. After you eat it, there’s a slight cooling affect on the back of your throat; wait one second, and then the spiciness comes forth and stings you. Still, I think it’s delicious.

On to the main course. Honestly, this just depends on what you want in an izakaya. Although most are traditionally Japanese, I have heard that some foreigner-friendly izakayas offer hamburgers and other foreign food (although, as I mentioned in another blog entry, this seems beside the point). There are so many varieties of food to choose from – raw chicken (apparently, you can’t get salmonella, or I’ll know pretty soon if I don’t wake up in the morning), cold tofu, salmon and cheese wrapped in a spring roll.

Another popular choice is chawanmushi, a Japanese dish that looks like pudding. Unfortunately it tastes nothing like pudding. The taste is remarkably bland, but slightly more bitter than sweet, from a food containing shrimp and eggs.

Typically these cold dishes are served first, to be followed by the hot, cooked entrees. Agedofu (揚豆腐), which actally tastes really nice in addition to being healthy, is fried tofu in a flavorful sauce: they look like little brown cubes. At this point any hot foods are ok: tonkatsu (breaded pork), fried or baked fish, seasoned pork, rice, cooked eggs, Japanese radishes…

However, more important than the food in the izakaya (unless you’re really, really hungry), is the behavior. What you have to realize is that although the Japanese people might be considered “uptight” in the workplace and public, they really know how to abandon their tatamae when the time is right for relaxing. As such, the izakaya is a very relaxed, open-minded environment. Take off your shoes, drink ’til you pass out, yell “sumimasen” (attention for the waitstaff) at the top of your lungs. Laugh loudly at a joke, leave your seat so you can talk to your friends on the other end of the table, order more food and drinks even though you’re finished.

Everyone has their own experience in izakayas – my first time there I was a little nervous (first day in Higashi-Hiroshima) and didn’t really take the time to appreciate everything. I can only offer this “advice” (I say in quotation marks because who am I to tell you how to enjoy this great country?): go with friends, research what food you want, order nomitabehodai, and don’t be concerned with price. Follow these simple rules, and you too will be on your way to being fully Japanized. I’m heading into Iwakuni tomorrow to see the Kintai-kyo bridge and Iwakuni Castle. I also got several recommendations to stop at a restaurant called Sanzoku for dinner – will let everyone know how that goes. Any comments, concerns, questions about Japan or the blog? Send them my way. Always have time for the heroes. Mata ne.