In the middle of the journey of my life, I found myself astray in a dark wood, where the straight road had been lost…

Dante was a man far ahead of his time. Who would have thought he had a machine that could look into the future and catch me walking down an obscure highway in Japan looking for a restaurant in the mountains? I mean, that’s amazing. I wonder what he did with the machine? And can we sell tickets, or at least see who to make fun of in ten years?

I’ll come back to my story about transportation options, but for the moment, let’s look at the target of my adventure: Irori Sanzoku (いろり山賊). In addition to being a prominent feature on the internet when doing searches for Iwakuni, I have had this restaurant recommended to me by many Japanese people. What is Sanzoku? Far from a tourist trap, it is a restaurant set aside from Iwakuni in its own little village filled with shops, waterfalls, and dining in the mountains.

Technically, there are several restaurants, the most popular being Irori Sanzoku. Irori Sanzoku boasts indoor and outdoor seating, and is most famous for it’s Sanzoku-yaki: chicken on a stick, grilled in fire pits.

Let me tell you something – this chicken is delicious. It’s far better than any yakitori I’ve had from both touristy locations and decent restaurants. Something about the seasoning, coupled with the cooked-in flavor from the grill, makes this an essential food to consume slowly before you leave Sanzoku. Order two, not one (about ¥500 each), and help yourself to the Sanzoku-yaki necklaces at the tourist shop before you leave.

In addition to its chicken, Sanzoku is well-known for its unique omusubi (おむすび, also similar to onigiri お握り): rice balls stuffed with different flavors including salmon, seaweed, and plums. I devoured the whole thing in less than a minute, but I was starving from my previous excursion into the unknown. The seaweed skin to Sanzoku-omusubi is rather thick and leathery when compared to normal onigiri, but still perfectly edible. They are served hot, not cold.

But perhaps the other most noteworthy food at this fine establishment is its udon, Sanzoku-udon. Udon is noodles, Japanese style. Very thick, very slipperly, sometimes served in okonomiyaki (if you like that style). And the udon at Sanzoku is hand made with special ingredients, and served in miso with beef for flavor. Absolutely delicious.

Got that? Udon, Sanzoku-yaki, and omusubi. If nothing else, get those three dishes. Even if you’re there by chance, there’s still traditional rice, meats, pasta, soups, etc. But why order them? Also, if you’ve never been there before, it can be a little disorienting. Like I mentioned, the “village” is a group of several restaurants and shops, even if Irori Sanzoku does stand out the most. 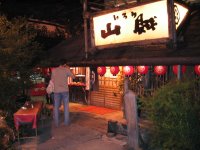 When you first arrive, find the ordering window as seen in the picture above. Chances are no matter how few people are there, there should still be a small line, and a table set up with the menu. You order first (incidentally, the prices are very reasonable – I had a very full meal for about ¥2000), and are given a small tablet containing your order and instructions for the chefs. I have heard that Sanzoku offers an English menu, but didn’t see any sign of it when I approached; if in doubt, just pick up one of the ordering papers and tell the cashier what you want in Japanese. Then, depending on what areas are available, you move to either indoor or outdoor seating, and hand that tablet to the nearest waitstaff or kitchen. The restaurant is so large and spread out, they need several fire pits. Once you have decided upon a table, you can pick up water, green tea, chopsticks, and a wet towel from the closest kitchen.

My only real complaint was the wait – it took nearly an hour from my ordering time to receive dinner, and it wasn’t really packed that night. Still, if I had had someone with me to make conversation, the wait probably would have been more tolerable. If only I could write about how incredibly hungry I was (read below and you’ll understand) – never in my whole life had my body, every cell, craved protein, carbs, and sugar. I wanted to absorb any food I could in an instant; that kind of pain reminded me of the Boston Marathon: not so much for the food craving, but rather the hour wait I had to endure to get to the bathroom before the race… ugh. Try telling that to a marathon runner who needs to hydrate. I take it back, Boston was worse.

THE CORRECT WAY TO GET TO SANZOKU

Train
From Iwakuni Station, take the Gantoku line west until you reach Kinmeiji. Walk north for a few minutes until you hit the highway, then take a left (west) to the first intersection. Sanzoku is up the hill on the right, past the hospital. You can’t miss it (unless you’re me).

From Kintai-kyo, go across the bridge and take the first street west/southwest until you hit the largest intersection. The train station should be on the right (west) just a few minutes by foot. I shouldn’t say “train station” – trains along the Gantokusen line are loaded only from platforms as seen below. Take this station to Kinmeiji. 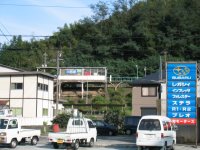 Now… for the dramatic conclusion, which ironically is a longer story than the mention of the restaurant. I departed from Iwakuni and the Kintai-kyo area at about 4:00, leaving me plenty of time to run to Sanzoku, have a relaxed dinner, and catch an early train back to Saijo. Fate, it seems, has a cruel way of playing jokes on me. Fate, on the other hand, is smarter than I am. Of course I had researched the location and means to travel to Sanzoku, but the names in the local area were a little obscure to me this time. I talked to one of the tour guides at the Kintai-kyo bus stop to confirm the general location of Sanzoku. I knew, for example, that if you took the Gantokusen line from Iwakuni Station west you would end up there. But I couldn’t find any information about traveling from the Kintai-kyo. I wasn’t sure if I was close, or ten miles away. Thus idiocy is ensured.

Still, I probably would have played it a little safer if not for the tour guide. When I asked her to show me where Sanzoku was on the map (no language miscommunication, I assure you), she pointed to the mountains just west of Iwakuni, a mere walking distance from where I was. Oh you foul temptress, you screwed me over worse than I did myself. I set off across the bridge, aiming west for the restaurant. Now, I must admit, once I saw that I was walking away from the city and into the mountains, I was a little freaked out. I knew Sanzoku was in the mountains, however, and decided to push forward. I doubled back and asked for directions at a 7-11 once I saw I had to walk through tunnels.

I guess I’m not as stupid as the impression I’m giving off – I knew that I’d be walking an absurd distance, but I wanted to be sure I’d find Sanzoku, and I thought the station just west of Iwakuni was Kinmeiji, as it was along Kinmeiji-dori. Unfortunately, it turned out to be a few stations shy of my goal. At that point I just decided this would be another Japanese adventure and would continue no matter what – I understood enough Japanese from the 7-11 employee to know I had to walk through three tunnels, and then turn right at the hospital.

First tunnel – the sight of Iwakuni has left my eyes, and I am immersed in the Japanese countryside. No problems as of yet, because the first tunnel was barely one kilometer from Iwakuni, so I’m assuming at this point the third one can’t be too far. I take it back again; I am stupid. Second tunnel – I passed through with no problems, and found a small store on the other side about a kilometer away. I stopped inside to enjoy the air conditioning and confirm my location. Using my Japanese, the store owner agreed with my 7-11 informant: travel through one more tunnel, up ahead on the right. I asked him how long it would take:

I think he was assuming I had traveled there by car (though I don’t see how, since I was carrying a backpack, looking sweaty, and was obviously a foreigner). Still, the directions corresponded to those I had received in Iwakuni, so onward and upward…

Ok, here’s the point where I really, really regretted my “Japanese adventure” – the third tunnel. Once I entered, I saw the markers indicating that this last tunnel was over one kilometer long. Filled with cars screeching by, filthy air, and the occasional mud splatter, I was on my way to truly being a stupid foreigner.

So where’s the upside, besides the delicious toy surprise at the bottom of the box? Well, I had worked up an appetite after walking for eleven kilometers. I had explored a side of Japan most foreigners rarely see – though, with good reason. I know where Sanzoku is now. And… I learned to appreciate the true kindness, the hospitality of the Japanese people. You see, after I emerged from the third tunnel, a car drove by and honked at me, going the opposite direction. It was the store owner at the small shop I had passed by. He had gotten his wife to get his car and had gone looking for me (probably after realizing I was walking all the way there). They drove me right up to the entrance, which was only about another kilometer away.

You can say what you want about the cultural differences – genkiness, honne, drunken behavior, or a certain distrust of gaikokujin. I don’t know about every single person in this country. All I know is, I met a man in a shop, talked to him for two minutes without any casual conversation or connection. And he took time away from his business, his means of survival, to go looking for me in the dark, believing I might be in trouble. I’ll leave you with that to ponder.