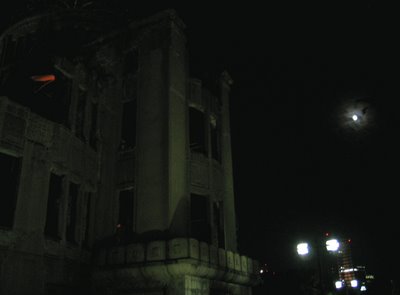 The Hiroshima lantern ceremony was held yesterday at 8:00 PM in Hiroshima city near the A-Bomb Dome. Imagine if you will…

A quiet summer evening in Japan. The sun has retired for the day, and the moon lies alone in a sea of clouds, waiting for the hour when it too will be enveloped. One foreigner makes his way from Hiroshima Station: a lonely, lost soul, uncertain of the what lies in wait for him at the Peace Park. He lets his feet carry him most of the way, receiving the occasional glances from Japanese passersby; but on this day, he believes those glances imply guilt, not curiosity. It has been sixty one years to the day since the Enola Gay dropped Little Boy, the first weapon of mass destruction, on top of this thriving metropolis.

How can he unburden himself from the mistakes of his ancestors? It’s impossible to not feel a little reluctance heading into the heart of a city to honor individuals his grandfather helped kill. But guilty or not, he continues onward towards ground zero.

The underground passages are deserted. The stairways empty. But topside, the crowds become denser. The dome is inundated with foreigners, with Japanese, with eikaiwa teachers, with businessmen, with children… so many children. The ones who live in a world so completely different from the one we created in 1945. If they can learn from the mistakes of our past, if they never forget the souls and memories of those lost, then we will all strive towards a future without these weapons, without needless deaths, without so-called “necessary evils”.

A child of seven, maybe eight years, watches as the flickers of light, representing the flames of so many lost souls, are carried away into the darkness, down where the river carries them. There they are extinguished, put at peace once again. But we do not recall them on this day to disturb them, but to never forget, never forget… 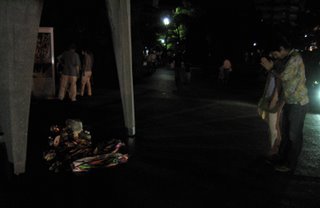 Never forget the child who believed that by folding paper cranes, she would escape the pain and death of the disease that struck her as a result of this tragedy. The Japanese pray to her, and indeed to all children lost on that day, at their memorial.

Let all souls here rest in peace,
for we shall not repeat the evil
– Peace Park Cenotaph