Learning From Your Fellow Gaikokujin

Pablum
Trite, naive, or simplistic ideas or writings. The opposite of this blog.

Iwakuni (岩国市) – not exactly one of the most frequented touristy cities in Japan, but it has a certain traditional appeal. I set out for this city as one of my regular weekend trips inside of Japan and found it to be quite remarkable. From Hiroshima, you can be there in less than an hour by local train heading west. Iwakuni station is nothing to brag about, but it is the focal point for all travel into the Yamaguchi area. From here you can take buses to Sanzoku (it’s a lot cheaper to just take the train and walk), Kintai-kyo, and everywhere inbetween. If you’re just passing through, I must say there is a plethora of shopping areas within walking distance including You Me Town, Fukuya, and Fuji Grand. And enjoy looking at the scale model of the Kintai-kyo bridge.

This bridge is the main attraction for tourists into Iwakuni for it’s unique, ahead-of-its-time architecture, dating back to the 17th century. Although the original bridge was destroyed by the typhoon Kezia in 1950, it was remade in 1953 with the exact specifications of its predecessor- all wood, no nails, five arches. 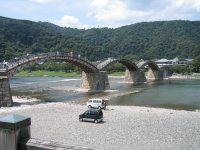 If you do choose to travel to the bridge from Iwakuni Station do so by bus; the Gantoku line west will take you reasonably close for ¥180, leaving you to walk about one kilometer to the bridge, but it isn’t a very busy line; trains leave about every 45-60 minutes. Whereas the bus will take you right to the entrance for ¥240. The bus stop is just to the left as you exit the station.

I can’t tell you the best time to visit the bridge. During the summer, local merchants offer snowcones, ice cream, and yakitori right at the foot of the bridge. But during the spring, the bridge is definitely rife with photographers because of its proximity to some good cherry blossoms. In any case, look for a table set up to the left of the bridge if you arrive in the middle of the day – ordinarily, you have to pay a fixed price to cross the bridge, ride the tram to Iwakuni Castle, and enter the castle. At the foot of the Kintai-kyo, there should be a nice woman offering you a ticket to all three at a reduced price, ¥930. 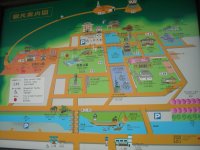 Once you do take your time crossing over the bridge, you’ll find yourself in a shopping area full with people, ice cream, and bridge-shaped cookies. Spend some time in this area – you can see a traditional Japanese garden, some nice statues, and the white snakes that are indigenous to the area.

In additional, the park just beyond the shopping district is an excellent place to cool down with a dip in one of several fountains: 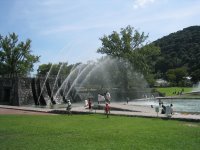 Once you move north of these, there isn’t much else to see except for the tram leading to Iwakuni Castle, straight up the mountain. You can walk there with relative ease (at least, from my perspective), but if you’re in a hurry, or don’t feel like a hike, the tram is probably a good idea. Remember – it closes at 5:00. The top of the mountain offers an excellent viewpoint of the Iwakuni area and if you travel a little to the south, you can see the Shinkansen coming in to the west. Travel a little further south and there should be an observation tower for better pictures.

If you head north after exiting the tram, it’s a five minute walk to Iwakuni Castle. Like most castles in Japan, Iwakuni is merely a recreation, a shell of its former self, which was demonished in the 17th century by orders of the Shogun. However, the castle today is filled with many fine Japanese blades, which still maintain their luster and sharpness after hundreds of years. I can definitely understand the respect for Japanese steel, if it is capable of lasting so long. Black Mamba chose wisely.

Throughout this trip, and during my other adventures, I’ve been trying like mad to dispel the notion that all foreigners are only capable of speaking English. I’ve said it before – even though Japan is probably one of the most tolerant countries to foreigners incapable of speaking the native language, there’s no reason we should further inconvenience the people when we are perfectly willing to learn. Fukuoka Now talks about this with some detail – foreigners who do nothing but speak English do nothing but diminish the respect of others who speak Japanese. It’s perfectly understandable if you’re new to Japan and are trying to become fluent, but we should all try harder. Think of how well this would go over in your native country. Fukuoka Now’s opinion on this definitely earned my respect.

Studying Japanese, teaching English, running through the mountains, getting lost on the trains, eating yakitori, spending money, fighting around the world, and signing off with you tonight…. the foreigner bids you good day. I said good day!