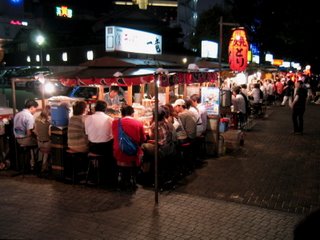 Fukuoka is probably the most foreigner-friendly place in Japan next to Tokyo. I noticed a difference immediately after getting off the train; whereas I might receive a 4-5 second stare in Saijo or Hiroshima, there were only slight glances this time from Hakata citizens, as if announcing “oh, another foreigner… I’ve seen them before.” Well, it may not sound impressive, but it was more relaxing. Also had my fair share of giggling schoolgirls in this city, even in the touristy sections. Once, after I was finishing my run from Ohori Park, I walked past about a dozen girls in blue uniforms. They couldn’t have been older than sixteen, and it was obvious they’d had limited contact with outsiders. So the first thing I hear behind my back is “hello! hello!” I responded with a little Japanese – “Nihongo ga hanasemas” (I can speak Japanese) – and they just giggled and stared, completely amazed. After I veered off into a Lawson convenience store to ask for directions, I could see them through the glass, and they were considering waiting for me to come out again so they could practice more English. Japan is funny like that; at least those are the positive reactions. I know there are racists out there, I just haven’t seen them.

If you’re new to Fukuoka, there are three major nightlife spots. Nakasu, which is on the east side of the river, closer to Hakata Station, is not the best place for foreigners. There are a few spots I’m sure, but mostly it’s filled with hostess clubs and Japanese businessmen. Speaking of which, foreigners generally aren’t allowed inside hostess clubs, unless you can speak fluent Japanese or one of the girls can speak English. I’ve heard they are kind of like strip clubs, but mainly they exist for men to have a relaxing conversation with beautiful women; the women listen to their problems and console them; apparently, their wives won’t do this.

The next areas are Nishi-Dori and Oyafuko-Dori. Technically they are the same area, the same street, separated by Meiji-Dori in the middle of Tenjin. Incidentially, there is a bus route running from Hakata Station to Tenjin for only ¥100 – easy to find (the buses have a picture of a 100 coin on the front), and only takes like 15 minutes. This nightlife area is filled with restaurants, yatai for ramen (ラ-メン) and yakitori, pachinko parlors, bars, clubs, internet cafes, etc. Since it’s so close to Tenjin, there are a lot of high-quality shopping areas just to the east. Tenjin is nothing but stores, expensive stores, and more stores.

Once you are in the clubbing scene about 12-1 AM, there are a few good foreign-friendly clubs:

The Happy Cock
My highest recommendation. While other clubs might be dead or paralyzed from 10-1, this place is always alive with an equal mix of foreigners and Japanese. The bar staff include some very pretty girls, and some fun guys to talk to. Nomihodai (all you can drink) starts at ¥3000 for men, ¥2000 for women, unless it’s a special event or Thursday, in which case ¥1000 for either. Or standard cover (entrance and two drinks) runs around ¥1500. When you think about it, that’s a pretty good deal for nomihodai. During special events they also have an open buffet, tabehodai (all you can eat). Every time I went in here it was always packed – there’s a special DJ night on Thursday. On Saturday there were too many people to be comfortable hanging around. Still, out of all the places in Hakata this is definitely the best in terms of deals, foreign presence, girls, music, dance area (they have a balcony view) and atmosphere. A+

Incidentially, I don’t know what it is about Fukuoka, but the women here are amazingly beautiful. I’ve never seen anything like it. I thought I just stumbled into a bunch of models walking around the Shinkansen station, but almost all the women here are like that. Come to Hakata in the summer, and enjoy the beaches, heh.

Sam & Dave
Another foreign-friendly bar in Hakata. I wouldn’t say this place was as lively as the Happy Cock, but if you catch it on a good night, it can be just as beneficial. Not as cheap, though.

Fu Bar
This place was dead when I went there, so I can’t really offer any constructive criticism. Not dead, dead-dead. No people. Not one.

Love Hotels
I only mention this because this hotel stood out to me above others I’ve walked by in Hiroshima. I can only imagine what the situation is like in Tokyo. If your night has gone particularly well with one particular girl, love hotels are places to get away for a few hours. Most of the time, I see these hotels in dark corners of dark streets, with unlit signs. However, the one below was right next to Canal City, in bright neon lights, and advertising its rates with a very luminescent sign. 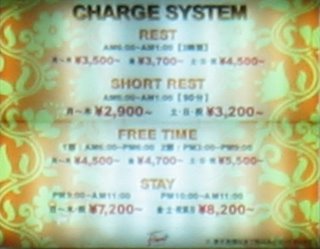 Yatai
Yatai are street stalls scattered all over the city. Most of them are along Watanabe-Dori, Nishi-Dori, and the river. Stop at these places. They are open practically 24/7, and have delicious, fresh, cheap food. Ramen from Hakata yatai is what this city is most famous for; ramen is of course Chinese in origin, but the Japanese have taken it, adapted it, and I believe made it ten times more appetizing. After a hard night of clubbing and watching the sunrise, a light ramen meal will fill you up before you sleep. In fact, more people probably eat at yatai in the early morning hours than for lunch or dinner. So which one should you go to? Well, there are hundreds. I found an incredible one and conveniently marked it on the map for you. It’s on the corner of one of the bridges leading to Tenjin, and is the first in one row of yatai. ¥700 ramen – check it out. Also, these yatai serve the Hakata style yakitori – grilled chicken on a stick, served with either seasoned salt or a kind of BBQ sauce. Incredible and delicious. You won’t want to leave. In fact, many yatai merchants will try to guide you to a seat – it’s good business to have a foreign presence at a restaurant: makes you look international. The people enjoying ramen with you are good company and in the same mood – hungry.

One of the best ramen yatai in Fukuoka