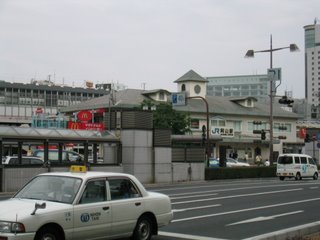 This was my first experience running in the land of the rising sun. Although Okayama (岡山), with a population of only six hundred thousand, isn’t exactly as dense or urbanized as Tokyo, it’s still not the best place for recreational jogging. Just like in America, you can’t exactly run down a major urban street in the middle of the day and not expect a few glares. How would businessmen coming out of a building in the middle of Los Angeles feel if a runner suddenly cut them off? Such is the same over here; there are places to run, and it would benefit you, especially as a foreigner, to find them. It would definitely be the mark of a foreigner to be running through city streets (or even in the surburbs – unless you live in a country town I wouldn’t recommend it) in the middle of the day.

So where can you run? Well, in Okayama, there is one spot I highly recommend, and it’s not difficult to find: the Okayama Sports Park. If you’re just getting off the Shinkansen in the middle of the city, take the west exit (near the Jupiter import store and the New York Bagel restaurant) and you’ll find yourself near a McDonald’s. The major road leading to the park is pretty obvious, and if it’s a Saturday or Sunday, chances are you’ll see some sports teams heading in the same direction. Follow the road almost due north, and you’ll see the park on your left after about one kilometer.

See a map of Okayama and the sports park here. My thanks to Gmaps Pedometer.

The park itself features a gymnasium, a baseball diamond & stadium, a lake, tennis courts, everything you’d expect from a sports park. They even have a stretching area with chin-up bars along the central walking trail, but I was too tall for the bar – unless you’re 5’6″ or so it probably wouldn’t work.

About the trail itself – if you go around the baseball stadium, you can make about a 2.75 km or 1.7 mile loop out of the park. It’s nice scenery, plenty of other runners but never too crowded, and the trails are made of nice rubbery granules. I’m used to jogging along Town Lake in Austin and I felt right at home. You can stay on the inner trail if it’s not too muddy, or you can stick to the outer trails closer to the major streets. Finish a couple laps and you’ll be ready for that 10K.