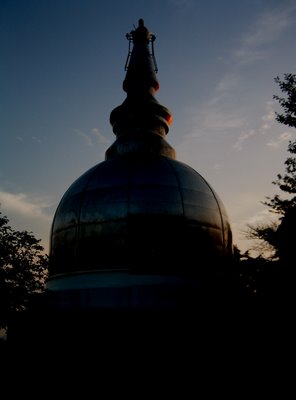 Very soon my eyes, stomach, and brain will be speaking of the virtues of Hiroshima, but at the moment, my legs will do the talking. Hey, they’re doing the best with the intelligence they have. Hmmm… that shouldn’t have been an analogy. Let me guide you into the lesser known parts of Japan.

Behind Hiroshima Station is the Shinkansen side. Although it’s not the main entrance, the bullet train side of any station is usually the part with better shopping; on certain weekends most stations offer cheap clothes from merchants for around ¥500-1000. Hiroshima’s is filled with gift stores, a drug store, a bakery, McDonald’s, a fresh croissant bakery, and the Jupiter Import Store – very handy. While the main entrance features the legendary silver fountain, the Shinkansen entrance is marked by this statue:

Here’s a good hill workout for you – drop your extra clothes in the nearby coin lockers (¥300 until midnight), put on your running shoes, and go right past that statue. The street isn’t well marked if you don’t know where you’re going, but you can clearly see a mountain in front of you – head for that. If that’s still trouble, I’ve got a map for you.

Map of Futaba no Sato

This area of Hiroshima is pretty unremarkable – although there are a few nice restaurants, there’s nothing to see besides these shrines… mostly residential areas and a few gas stations. However, you’ll know you’re in the right place when you turn a slight left and find yourself running straight uphill (work with me here… it’s good for your gluts, anyway). At the top of this hill you can see the Onaga Tenmangu Shrine, but it’s rather small, and seems to be under construction… 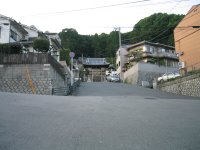 Anyway, just take a left, continuing on Futaba no Sato, and you’ll continue going up and up and up until you reach this graveyard. This was impressive – the steepest graveyard I’ve seen since I’ve been here. 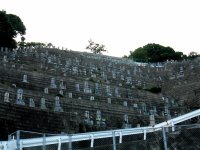 From there, it’s about 1 km to the top of the mountain where you can relax with a simple shrine and spectacular view of the city. Ok, maybe this was a better hiking than running path, but I’ve got to fill blog space. If you’re crazy, you can still do it. However, as a hike, I’d recommend starting on the other side of the mountain, where the true shrine trail begins with a series of red torii. Ok, this isn’t good either- the torii are almost exactly six feet tall, so I had to crane my neck every step of the way. Not exactly the most pleasant walk.

But, it’s still a very traditional side of Japan you might want to see. The trail is covered with a series of red shrines, all the way to the top. These shrines seem to be dedicated to dogs – don’t ask me why, I don’t know. 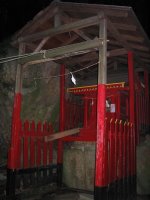 If you’re in Hiroshima and are tired of the city shrines, this path offers some of the less-frequented and less-disturbed shrines in the area. Enjoy your time here, and spend it however you choose. I’m just the foreigner putting the information out there. Put on some speed, follow my lead, and watch over me.