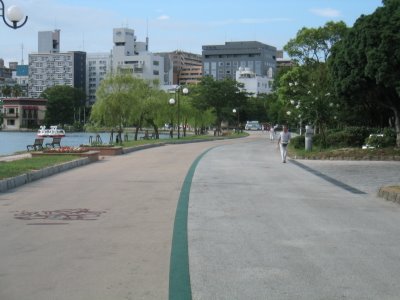 Ohori Park is definitely easy to find if you’re in Hakata for a weekend. Located just about one kilometer from Tenjin and a few kilometers west of Hakata Station – a station which is a focal point for all Shinkansen, local train, city bus, subway, and long distance buses – it stands out as an area with more space than seems possible in Japan. Hence, I like it a lot.

To get there – I wouldn’t suggest running from any major train station. Just like in most other major cities, Japanese people frown upon running in major urban areas. In addition, it’s really annoying to put up with all the stop lights and foot traffic between any train station and Ohori Park. My suggestion – take the subway Kuko Line to Ohori Park station and proceed south. You can’t miss the park; just like that aerial photo above shows, it’s the “central park” of Fukuoka. It’s certainly the greenest place I’ve seen in an urban area since I’ve been here. 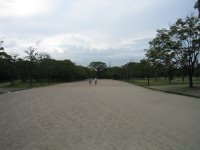 Local attractions include the US Consulate, which is located on the northwest corner of the park. The remains of Fukuoka Castle are also within its grounds, but they’re hardly worth seeing – you can’t even get a sense of scale or magnificence of its former glory days. As far as running goes, there are many smaller trails leading out of the park if you want to stick under the cover of trees or don’t prefer the lake view. There is a even a track right next to the lake if you feel like a speed workout. 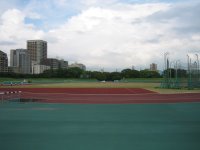 As for the lake itself, it’s definitely worth it. The entire trail is precisely two kilometers long, marked every 100 meters. It’s well maintained and features a restaurant, vending machines, and a chance to converse with fellow international runners on the two-way path. If you want to extend the loop slightly, you can choose to veer off into the path that separates the lake – it’s just as easy, but not as well paved.

As always, here’s a map of Ohori Park and the surrounding area. Don’t do what I did, which was get lost on the way back to my hotel and end up near the zoo. Trust me, I didn’t even know that was possible. Take the subway there and back. The buses run there as well, but if you’re only in the area for a short while, it’s probably not worth the trouble to figure out the schedule.

I’ve just finished a 10K run down a path which will be covered in cherry blossoms in March, and for the first time since I arrived, I feel comfortable in Japan. Granted, I’ve been traveling around so much these past few days I’ve felt like Phineas Fogg, but coming back to my apartment to relax after a vacation gives you some perspective, makes it feel like home. Many more blog entries are in the works – be on the lookout, heroes.