Again, my apologies for my lack of entries to date; with family visiting, I haven’t had as much time to write. And it’s also given me some time to think – I will still be posting my experiences in Japan regularly, but I wouldn’t expect them every day necessarily. Could happen, but more often than not I’ll be needing time to sort out my thoughts.

Whose cuisine will reign supreme?

Today was filled with a large variety in Japanese food that I’ve enjoyed immensely. Let us begin with a popular sushi bar called Creative Sushi Nobu. In addition to being highly recommended by my brother, who is quite the connoisseur of Asian cuisine, Nobu offers Japanese sushi California-style: with avocadoes. 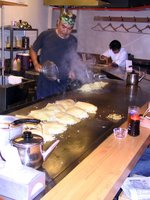 Next up: Okonomimura (お好み村). Okonomimura is a small district in the shopping area of Hiroshima that contains nothing but Okonomiyaki (お好み焼き) restaurants. Although Okonomiyaki is found all over Japan, the Hiroshima-style is well-known and quite delicious. The difference? Noodles, the sauce, and very special seasoning. Although some would argue they just know good food in Hiroshima.

What is Okonomiyaki? Some would call it the Japanese pizza; I prefer to think of it as the Japanese flapjack. Essentially you have a think layer of pancake batter on the bottom, followed by fried cabbage, onions, pork (and with any vegetables or ingredients you might want). Top this off with a layer of noodles (the Hiroshima-style), either thin or thick Udon, and finished up with a fried egg, special Okonomiyaki sauce, and some light seasoning. Definitely the specialty of the area, and worth trying. A little heavier than most Japanese foods.

And what better way to finish off the day with some yakiniku (焼肉) for dinner. Yakiniku in Japan involves cooking your own raw meat over a small personal grill. Also called Japanese BBQ. There are only two restaurants I know of in the area that serve yakiniku: Shichirin Tango and Gyukaku. Gyukaku (牛角) became so popular in Japan that it spawned a franchise in America

I recently had the chance to try one of these restaurants in the Hiroshima area and was very impressed. It’s probably the simplest and tastiest food I’ve had the pleasure of enjoying since I arrived. Go in, take your seat, and decide on what meat you want. Choose several varieties if you’re unsure (probably a good idea anyway). Gyukaku offers many different types of chicken, beef, vegetables, with different spices and seasonings. Once you’ve decided, they will bring you an iron-hot grill with the raw meat on a platter, ready to be cooked by you. The meat is so thin it cooks in no time at all, with the flavor cooked right in, never escaping. Absolutely delicious. If any one of my readers want to try it out, it’s my treat. I’ve got a craving right now.

Coming up: I do an intensive study on honne and tatamae. My quest to find Junior Mints continues. And, to answer the age-old question, what do you get for the man who has everything? Japanese food, followed by a lobotomy, so he can enjoy it again for the first time. The adventure continues…