One of the things you may or may not have heard about Japan is the booming population of spiders. A coworker of mine who was quite arachnophobic had a very difficult time adjusting to the country. I have no idea if this is a big problem in cities like Tokyo or Osaka, but in Hiroshima, Fukuoka, and everywhere in between, I can vouch for the presence of thousands of spiders, scattered all across the inner-workings of every town. Street lights, door handles, low hanging trees, telephone poles, vending machines, even along the rails near sidewalks and highways…

Another piece of the ancient puzzle comes together. I was always curious about the presence of giant spiders in the Legend of Zelda games from Japan: thinking they were a nice work of fiction, creating a believable, interesting monster for our hero to destroy. Yet these tektites, as they were called, actually exist in Japan. I don’t mean there are dog-sized spiders roaming the countryside, bouncing around and biting people, but you’d be amazed at the size of these things. They could easily match wits with a Tarantula. Long story short – watch your head if you’re tall, and be careful where you let your hands rest.

I have no idea which ones are dangerous, but webs are everywhere, and these creatures are massive by American standards. Be careful. Speaking of unusual critters, Japan is also the home for some quite unique beetles. In my small town environment, you can often hear them chirping loudly in the twilight hours. In fact, some of my students take the time on weekend mornings to catch beetles with their children in the park. Just like catching butterflies used to be popular in America, the Japanese nuclear family still comes together to enjoy snagging the occasional beetle. They really haven’t been a problem for me while walking or running, but they can fly. 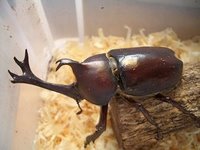 Well, so much for my politically vibrant, energizing blog. Tonight I bring you… the news about bugs. Heh. Well, on a more serious note, if you are planning to travel to Japan, be mindful of the peak travel times. I’m planning a ticket back to the US for Christmas and I’m already encountering trouble from high prices, even by holiday standards. Japan has three major nationals holidays.

Obon is the time of year when families gather together and return to their hometowns for prayer and honoring the departed spirits of their ancestors. Held from August 13th-15th every year.

Golden Week is a less formal holiday, requiring no traditions as far as I know, just a week of national holidays. It runs from late April to early May.

Shogatsu (正月) is the Japanese new year. Most of Japan is Buddhist (85%), so naturally they do not celebrate Christmas, but I would say as a country the commercialism of Christmas is observed the same way as it is in other locations. Another way to boost the economy – buy presents, make kids happy for a day. Many Japanese families “observe” the gift-giving aspect of Christmas, even though the religious significance means nothing to them. Having your cake and eating it too, I’d say… cake would be good right about now.

To summarize, Japan has big spiders, travel plans are in the works, and I learned you can get cheaper Shinkansen fares if you purchase tickets from a private office in the middle of Hiroshima city – may be true of other cities as well. Expanding my network and writing for foreigner magazines, this is me, signing off. Don’t ever pity me… I could hold my own against Ken Jennings… ok, not really. Sayonara.