My non-religious pilgrimage into Shikoku (四国) continues. As I mentioned while discussing the Shimanami Kaido, ferries run to Imabari from Onomichi, Kure, Hiroshima, Mihara, and even Kobe. And Imabari (今治市) is, without a doubt, a small town. If you’re traveling from the Shimanami Kaido, the bus or JR line will drop you off at JR Imabari Station, which is essentially the town center, both in geography and in terms of life. Walk east. You will run into the shopping district of Imabari – a quaint series of small shops in a half-covered skyway area. Similar to Hondori in Hiroshima.

Keep walking east and you will reach Imabari Port. All ferries leave from here, and it’s usually a good idea to leave by ferry rather than by bus, especially if you have a bike that you don’t want to disassemble for transport. Confused about the departure times? No problem – there’s an information line in the ticket office, and the woman on the other end speaks decent English. 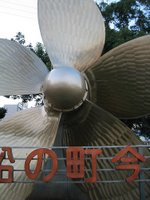 One highlight to Imabari is its castle – although it’s not an original, it is still surrounded by a moat fed not by rain, but by the ocean tide. I don’t believe any other castle or temple in Japan boasts this. Although the exterior looks very traditional, the surroundings are another story – there seem to be living quarters on the island right next to the castle. When I was there, it was filled with cars, and major construction was going on. Still, the sight of the castle itself at sunset was worthwhile. Probably not a good idea to pay the admission fee just to see the modern museum interior. 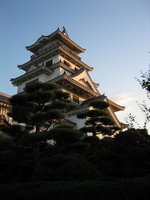 Although Imabari may not be the best place to visit, it’s probably a very decent place to live – access to some of the best running and biking trails in the country, traditional surroundings, ferries to most major cities, and beaches within your grasp. Imabari was definitely designed with runners in mind – you can go anywhere in this town for a good running trail; take the biking path back to the Shimanami bridges for a nice 10k loop. In addition, it’s only a 35-40 minute train ride from Matsuyama.

Matsuyama (松山市) may be the largest city in Shikoku, but it projects an image of a mountain town. Which it is, but I was expecting to see more of an urban setting like Osaka. Before you even notice this about the city, however, you have to get there. There are two trains running to Matsuyama from Imabari – a limited express with reserved (¥1960) and non-reserved (¥1430) seating, which will get you there in about 35 minutes. Be advised they will check your tickets on board the train and make you pay for the seat right there.

The other standard train on the JR Yosan Line just isn’t worth the trouble; it only takes about 30 minutes more than the express, but the train stops for 3-4 minutes at every station. It’s really frustrating. Once you do reach Matsuyama, you may find that foreigners are somewhat of a novelty – I spent two days there, and only saw one foreigner; keep in mind I was in the major areas like Okaido and the nightlife district. Still, nothing. I’d love to know the foreigner population. Maybe this is why Matsuyama is the first station I’ve seen that doesn’t use Romanji on the train timetables; it’s not a problem if you’ve written down the Kanji city names, but I was a little surprised to see that in a big city.

First stop for anyone after a long, hard day – the Dogo Onsen (道後温泉). The oldest and most touristy hot springs in all of Japan. If you’re traveling from the JR station, take the #5 tram across the street and ride it all the way to the end. You can’t miss the Dogo area – you emerge in what looks like a smaller version of a 19th century train station, complete with steam locomotive. They actually run this locomotive on certain days, so be sure to check ahead if you feel like an old-fashioned ride.

The Dogo Onsen area is actually a full shopping district. This was the most traditional clothing I had ever seen in one place. People strolling around in yukata (bath robe) and geta (wooden clogs), having finished their bath and soak. They sell these in all of the Dogo-area stores along with orange products (still in Shikoku) and other souvenirs. And on Sunday mornings merchants line out their foodwares on the adjacent street.

Even before you come upon the Onsen, you will see the foot onsen and the Botchan Karakuri Clock.

As for the Onsen itself – yes, it’s a Japanese onsen, which is definitely something you should experience at least once. On the other hand, this particular onsen is always crowded because it’s a tourist destination. Unless you arrive during non-peak hours (during dinner, maybe), you should expect many people to indulge in a soak. See the link below for prices.

If you’re searching for someplace cheap to stay for the night, the Matsuyama Youth Hostel is right next to the Dogo Onsen. Seven minutes and you’re there. Be advised – there are no English signs leading to the hostel, and it’s down a somewhat hidden road.

It’s far better than any ryokan you could get for the same price – ¥3360 for a private room, about ¥2100 for a dormitory. In addition, you get free internet access, green tea, two massage chairs, free tourist pamphlets and materials, and access to washers and dryers. Not a bad deal at all. The owner speaks English, and his wife is eager for you to practice your Japanese with her. They serve western and Japanese-style breakfasts.

The nightlife district in Matsuyama is nothing to boast about. As I mentioned, there doesn’t seem to be a strong foreign presence in this city. Still, if you want to explore the scandalous areas, they are just east of the shopping area in Okaido.

Matsuyama Castle is definitely worth seeing. In fact, it’s impossible not to see, being set out on a mountain in the middle of the city. It’s one of the original twelve castles in Japan. And yet, when I was here, it was undergoing major reconstruction on its exterior. As a result, no good pictures. Be careful, because I don’t know how long they’ll be doing this.

Technically you can climb up to the castle from either the west (less traffic) or the east (touristy) sides to avoid paying any tram fees. Yet, this is quite a climb, as the mountain is massive. Go to the east entrance from the Okaido tram stop, pay ¥480 for a round-trip ropeway (chair lift) ticket, and enjoy the ride. While the castle was under construction, the grounds featured shops, places to eat, and plenty of places to just relax and talk. It really had more of the atmosphere of a city park.

News this week… my boy Koizumi is going away. I’m sorry Koi. I did my best to promote your anti-evil lifestyle to the Japanese people, but I have a sinking suspicion I should have said more in Japanese. You’re my boy, Koi! Koizumi will be replaced by the “young” dashing Shinzo Abe. As he’s a relative newbie in the world of politics, I’ll be holding off judgement. Still, I can say with absolute certainty, he doesn’t look like Elvis. Abe is believed to be a figure who can help amend damaged relations between Japan and China.

The weather is perfect this time of year – warm, but not hot during the daytime, and some nice cool air once the sun goes down. The air is drier and cleaner. If there were ever a time to visit Japan, it would be late September to early October.

I am in search of foreigner magazines to submit travel pieces and my perspective on Japanese culture. The Foreigner seems popular, but Seek Japan was kind enough to add my blog to their list.

Your daily dose of truthiness