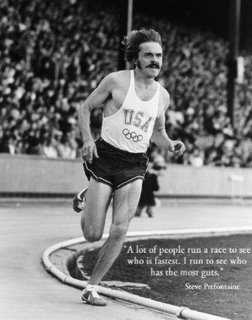 If Prefontaine had been Japanese, he still would have said…

“I don’t just go out there and run. I like to give people watching something exciting.”

Steve Prefontaine lives in Japan. After my little exercise and adventure on Monday, I was walking down Hiroshima’s main shopping area, Hondori, and came upon a Nike store. Just a little curious, I ventured inside and to my amazement found an entire section of apparel dedicated to Pre – the Oregon waffle shoe, the University of Oregon sweatshirt, even some free Pre postcards which I’ll have to send to my old coaches.

Don’t know who Prefontaine is? You should be ashamed of yourself if you’re a runner. Arguably one of the greatest distance runners of all time, Pre still holds almost every record at the high school level, and would have made a similar comeback in the olympics if not for his untimely death at 24. Why Nike? His coach at Oregon was one of the original founders of Nike. Imagine having a coach at your disposal that can make almost any running shoe you want… I’m having a hard enough time finding anything over a size ten in Japan.

But if you are a runner in Hiroshima, there is still hope. I’m referring of course to an excellent running store right next to Hondori called Yanbo. Yanbo has a large selection of running and fitness apparel including lots of Powerbar Gel packs, something I doubt you’d find anywhere else. Just like any running store, they have entry forms and posters of all the upcoming races.

Sasaki-san, the manager, is a runner himself and loves to talk shop. As I figured out, he has friends in Texas and knows all the major marathons there (White Rock, Freescale, Houston). He knows a few English words, but it would be better if you were familiar with the key Japanese words:

Hashiritai des
I want to run

He’s always up for talking about your best races, and knows the best places to go in the Hiroshima area. Be sure to ask him about his PR (personal record) of 3:18:00 several years ago or his last marathon in 2002. If you can’t manage the Kanji or instructions with certain race entry forms, Yanbo is the place to go for help.

Speaking of upcoming races, the deadline for the Peace Marathon is September 30th. The entry form can be a little complicated if you don’t read Kanji. Email me if you’re having any troubles and I’ll guide you through it. Bottom line, you need your katakana name, Romanji name, your signature or name stamp, gender, birthdate, nationality, address in Kanji, and contact number. In addition, all entry forms must be sent in by mail and with a payment receipt from Hiroshima Bank – time to practice that particular conversation myself.

Going back to my title today, I wasn’t referring to some “metaphorical” journey in which my Texas brain is slowly transitioning to the Japanese mindset… well, it may do that, but not just yet. No, “Texas” is a real place in Hiroshima, or Hakushima: Pachinko Slot Texas.

First, let me guide you along the running trail north of Peace Park – it’s actually quite nice, away from the roads, along the river, relatively little foot traffic. I was used to running along Town Lake and I felt completely at home. The trail isn’t too ideal for long distances, but it’s very relaxing and has a more rural than urban feel, despite the fact you’re still in the middle of the city.

This trail ends close to where there is actually a Pachinko parlor called Pachinko Slot Texas. I just had to check it out, as Texas shushin des (I’m from Texas). I was half-expecting there to be pachinko girls dressed in skanky cowgirl garb telling all the players “yee-haa!” However, I’ve noticed that despite the names, and apparent “themes” to these parlors, everything on the inside is basically the same. It’s not like in Vegas where you have a completely different atmosphere in The Mirage vs. New York, New York. No, they keep the parlors consistent. However, Hiroshima probably isn’t a good gage for Tokyo. Somewhere in this country, there are pachinko cowgirls… come to me, girls…

Studying Kanji, finding English sections in bookstores, renting jet skis, and still planning to eat ramen and bicycle the Shimanami bridges… this is ターナー, signing off…