99% of all Japanese people believe that if you are a foreigner in Japan, you must speak English as a native. Therefore, the next time one of the “free English lesson” Japanese people approaches you, speak in gibberish before explaining in Japanese that you are the first citizen of your native country to visit Japan, and hearing English spoken causes you uncontrollable anger. This will debunk the notion that all foreigners speak English, and reinforce the superstition that a foreigner may try to eat your children if given the chance.

As any tourist who has ever visited Japan is aware, the JR train system offer various rail passes that allow unlimited travel on all JR Shinkansen, local trains, ferry boats, and some subways. Obtaining such a pass allows the tourist to do more traveling inside Japan that someone with a working visa might ever experience – you have to be visiting Japan with a tourist visa, and the pass must be purchased abroad. 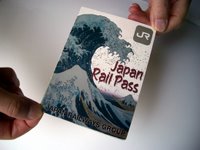 However, there is something of an equivalent pass for those already living in Japan and wishing to travel during the peak holiday times. The answer? Seishun Juhachi Kippu, a ticket that allows unlimited travel along all JR local and rapid trains during the three major holiday periods. Although this does not include the shinkansen, it is still quite a perk.

How does this work? Essentially, just walk up to any major JR ticket office. The SJK (Seishun Juhachi Kippu) is in fact five tickets for five days of unlimited travel, either consecutive or within a certain interval. The catch is five days must be purchased, so even if you’re only planning for one long weekend, you won’t have the chance to use a few of the day passes. But if you’re doing extensive travel and not concerned with time, you still get your money’s worth. Anywhere in Japan for ¥2,300/day? Pretty good deal. And you do the math: five days = ¥11,500. In addition, if you’re not planning to use the extra days, you can have other people use the passes the same day as you and travel together.

Brush up on your astronomy – Equinox