“The best and most beautiful things in the world cannot be seen or even touched. They must be felt with the heart.”

I have been to the edge and back. I have journeyed into tomorrow, fought the fiercest warriors, loved the maidens fair… this sentence didn’t end up where it started. You might just say I did a little biking. This past weekend I undertook one of Japan’s big touristy adventures: biking the Shimanami Kaido (しまなみ海道), a series of bridges connecting Japan’s main island, Honshu (本州), with a smaller southern island Shikoku (四国).

As long as you have a little energy, anyone can pull this off. It took me about eight hours biking time with multiple stops, and I was taking it very easy to enjoy the sights and smells.

Technically you can catch a ferry from Honshu to Shikoku and start biking from Imabari (今治市), but I think that the course from Imabari to Onomichi is slightly more uphill overall. You can rent a bicycle from either end, however, so whether you want to rent from Onomichi, ride to Imabari and catch a ferry back, or vice versa, both are feasible. Be advised, however – renting a bike costs ¥500/day + ¥1000 deposit, which is refunded to you only if you return the bike to the store you rented it from. Since most people do the course as a one-way trip, this seldom happens (150+ km in one or two days? Possible, but not completely relaxing).

Onomichi is a small tropical town most known for it’s Senko-ji Temple overlooking the inland sea. In addition to being an excellent starting point for those biking the Shimanami Kaido, the city boasts some excellent ramen shops featuring Onomichi’s unique udon (Japanese noodles). Be sure to visit Shukaen – south of the ropeway station along the large street heading to the inlet.

The bike rental shop is right next to Onomichi Station as you get off the JR (TEL 0848-20-1360). However, I’ve read many people’s testimonials of this bike route that suggest you should not cross the first bridge (Shin-Onomichi Bridge) from Onomichi to Mukaijima by bike, rather you should use one of the five ferries. Just walk along the shore and chances are you’ll see one within a hundred feet. Your choice whether you want to rent a bike in the Onomichi center or wait until you arrive in Mukaijima.

Other than some beautiful urban and island scenery, there really isn’t that much to see as you’re crossing Mukaijima (although the weather was absolutely perfect this weekend – not a cloud in the sky). The course is slightly uphill, but it’s really not noticeable. What you should be careful about is reserving enough energy to climb the hills at all the major bridges – the one on Mukaijima isn’t as bad as the others.

Innoshima Bridge closes the gap between Mukaijima and Ikuchijima Islands. The path for bicycles is under the bridge, and has room for pedestrians, motorcycles, and bikes. Toll: ¥50, based on the honor system (no camera at this bridge). Innoshima was probably the most rural of all the islands, passing mostly through farmland for chickens and crops. There’s just one minor hill before the uphill to the bridge, nothing to worry about. The bike path isn’t separate from the country road most of the time, but there’s hardly any traffic. There’s a rest stop about halfway between the two bridges – when I was there a woman was selling fresh fruits and juices. Not in the least surprised to see a foreigner – the biking path must be pretty popular.

The Ikuchi Bridge lets you leave Innoshima behind and enter Ikuchijima. A bit more treacherous of an uphill than you saw on the previous bridge, so be sure to save your strength. Toll: ¥50, but I believe this stop has a camera.

This is the major island in terms of attractions, food, and a nice riding path along the beach. After crossing the Ikuchi Bridge head towards the northern shore and enter the town of Setoda (瀬戸田). Four things:

1. Lunch, as this is a good staging point if you left Onomichi around 8-9 AM. Be sure to try some of the fresh Japanese oranges, which are practically indistinguishable from limes. 2. Kosanji Temple. It costs ¥1200 to get in and is pretty run down. Still, it’s not exactly something you see everyday. The temple is still in use and features some of the brightest colors I’ve seen on a Japanese temple.

People were laughing at me the entire time I was in front of the temple… two possibilities – one, I’m just a goofy-looking foreigner. Two, blue bicycle shorts just look ridiculous on me.

3. Ikuo Hirayama Museum of Art – decide for yourself

Ride past the town, past Sunset Beach, and enjoy the breezy, long, flat, straight biking path. No rush, no worries. Those will come when you reach the hill up to Takara Bridge – it’s an ugly path. Be ready. Toll: ¥100. 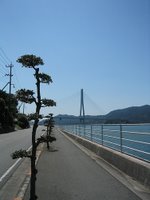 Just as you get off the bridge you should notice two things: a self-defense force helicopter on display, and an excellent rest stop. Also not a bad place if you’d like a late lunch – they have a full store, restaurant, vending machines, ice cream stand, and photo opportunities. Be sure to look in the tanks of bottom-dwelling rock fish. It’s a long, uneventful path to the next bridge, with the exception of the gradual uphill you have to endure instead of finishing in one painful kilometer. Riding through more forests than open plains. Ohmishima Bridge – toll ¥50.

Not much to see here unless you want to ride off the chosen path and travel to the south side of the island. Otherwise, you’ll be onto the Hakata-Ohshima Bridge before you know it. ¥50 toll. I should also point out that all of these bridges have commemorative stamps with paper at the end of every tollbox. Not a bad souvenir. Stamps are very popular in Japan as a cheap touristy thing to bring home with you, proof that you have indeed seen USJ or Imabari… it’s kind of practical, if you think about it.

The final island. You are almost finished. Now is the perfect time to stop your bike in front of helpless Japanese passersby and exclaim, “I am gaikokujin, hear me roar!” This island starts out with a very steep uphill and lets you enjoy a nice downhill slope until you approach the Kurushima Kaikyo Bridge. No urban areas, just a nice country path. Be sure to stop at the final rest stop just south of the bridge to look at the freshly caught octopus and enjoy a snack. The Kurushima Kaikyo Bridge itself – the longest suspension in the world, and quite so. It spans six kilometers and has excellent side lanes for bicycles and people. Great picture opportunities of the other islands and nearby Imabari. Take your time to enjoy this trail before paying the ¥200 toll at the end. Remember – the sun on your back, the wind in your hair…

Once you have reached the end of the bridge, take some time to relax – you can go to the nearby Sunrise Itoyama (signs will direct you there, but it’s at the end of the biking path) to return your bike, take a hot shower, and get some food. They have an English speaker on staff if you run into any trouble – ask him about Florida. Before you return your bike, however, you might want to go to one of two nearby observation points for the bridges – they’re both uphill, so it may not be worth it, but less than one kilometer away from the Sunrise. Get some pictures overlooking the bridges and chat with fellow finishers.

Finished? Take a bus down to Imabari for five kilometers if you want to catch the 12:50, 15:00, or 17:30 ferries heading to Hiroshima Port. You cannot take a ferry from Imabari to Onomichi; it’s one-way only. Or you can walk about two kilometers to the nearest JR Station and catch a train to Matsuyama or Imabari. I personally chose to rent a bike for two days to explore the nearby area and have access to some good transportation.

Starving? There’s a decent restaurant about two kilometers outside of Imabari along the biking path called the Tomato & Onion – they have Aussie beef, which is delicious after dealing with lean Japanese-style beef for a few months.

I’ll have more detailed information about Imabari and Matsuyama in my next entry.

Mamikata is about a 40-45 minute walk from the Sunrise Itoyama. As far as I know, no buses run there. A ferry will take you to Takehara (竹原, along the JR Kure Line) for ¥1100. Ferries run every hour on the half-hour until 9:30 PM. Not a bad option if you’re headed somewhere along the Kure line or missed the last ferry in Imabari (5:30 PM).

Pictures of the entire journey

Other interesting encounters – met a woman on the JR Sanyo line who was married to a Romanian; not exactly unheard of, but she didn’t speak Romanian, and he didn’t speak Japanese. They both communicated with each other in English. That was really funny to me, but I guess it works. Also, after having suffered through an interesting foreigner “interrogation” with a man in front of a store in Imabari, I’ve noticed there is always a certain order to questions a Japanese person asks a foreigner:

At first, this guy thought I was French and started a small conversation in Francais. I should have gone along with it to dissipate the English-only stereotype, but I was really thirsty and he was offering me a free drink. Maybe next time I’ll try speaking fluent Latin…

I am still in search of an alternative to Smoothie King so I can once again regain my mass and conquer the world. Don’t forget – the Sake Matsuri is in two weeks. If you’re in the area that weekend, come and hang out with me. Always up for meeting friendly people to discuss world affairs. My revelation to you this week – life doesn’t feel quite as real when you’re single; whether you’re a man or a woman, you need someone to help bring that equal mix of balance and uncertainty. Think about it… I fell in to a burning ring of fire… I went down, down down… and the flames went higher…