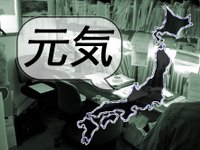 “Nobody can make you feel inferior without your consent.”

Let me give this another shot. The Japanese world – intimidating to your average foreigner. Most of us come over here with little-to-no idea of what is in store. All we have is a company name, a city, a contact. And just like with any new experience, be it a new boyfriend/girlfriend, a new car, or something as complex as working in a foreign country, there is a “honeymoon period” – a time when you can only see the positives to living in Japan, ignoring any small problems in the face of a great experience.

There’s nothing wrong with this; in fact, it’s unavoidable. But once you do “come down” and start to be objective about your work environment, you might notice some remarkable differences. Some cultural, some personal. After talking to several eikaiwa teachers, I have come to a few conclusions regarding expected behavior in the Japanese workplace – now, whether this is true from the highest corporate ladder in Tokyo to the smallest bank in Matsuyama, I’m not sure. All I do is report my observations and hope that others will benefit and learn from the example.

What is genki? Genki is the term in Japan associated with energy, being upbeat, even downright happy to the point of psychotic. If you wake up late, don’t get the chance to exercise, skip breakfast, get caught in the rain, and lose your wallet on the way to work, you think you can let it show through? Guess what, you can’t. You have to be genki to be considered a model worker.

For the most part, I can understand this phenomenon in Japan. It’s not by nature good or bad for workers, just a different code of standards on behavior. However, I believe that under some circumstances, especially with Japanese higher-ups dealing with foreign workers, genkiness is not only rude, but downright condescending. For example – consider the banks in Japan. Unlike in America, where you might expect a bank teller to have a low-energy persona while on the job and save their strength for their off-hours, Japan doesn’t operate that way. To customers, you have to give off an extremely high level of energy and enthusiasm, regardless of how dismal your job or the task at hand might be.

Now, I can understand this, and even recognize the importance of it in the workplace – as far as customers are concerned; you should “advertise” that you enjoy their business, and appreciate the money they bring in. But what about interactions among fellow employees, or the employee-manager relationship? Surely genkiness isn’t expected, since after hours or behind the scenes, no customers are in sight?

Yet this is precisely what happens. Managers relay some trivial information to employees (e.g. “We had two new accounts today! We raised ¥403!”), and they are expected to react with cheering, clapping, smiling over results they really had no or little influence over. Are employees supposed to be excited at all hours during the workday? What do they care if the business raises this much money, or this little money? How does it affect them? It won’t affect salaries, it won’t affect hours… The only thing extra work does is put more money into the corporation. I don’t see how anyone could exactly get a thrill from that. But that’s genkiness for you – the other employees may not care either, but they are expected to react with energy and enthusiasm over insignificant figures.

This is even more pronouced when you introduce a foreign worker into the mix – American, Canadian, Korean, or whatnot – and try to enforce the same code of behavior on him. We foreigners aren’t prepared for that; we don’t understand it, and we may never understand it. But what really strikes me like a slap in the face, and makes me realize I’m never going to entirely fit in, even in something as familiar as the eikaiwa environment, is someone exhibiting the façade of genkiness instead of their true personality.

Case in point – you decide to take a day off during a busy time of the year for your business, something you are entirely within your right to do. And although your manager might grant this request, you sense that he is holding some resentment back, keeping his honne to himself rather that just explaining that he doesn’t appreciate your request at this time. But this doesn’t happen in the workplace – managers maintain the façade and act completely upbeat, completely genki, even though they are a little resentful.

I know this may be standard behavior in the Japanese workplace, but for me, showing genkiness rather than a genuine reaction is no better than shouting a lie right into my face – it’s insulting, and above all, it’s condescending; it says to me, “you don’t have the intelligence to understand the true reason behind my feelings, so here, enjoy this genki persona. Leave the serious emotions and work to us Japanese, ok, little gaijin boy?”

If you have anger, show it! Let it out of your heart! I get a feeling that working in Japan is like being around a girlfriend after you do something stupid: she may say “everything’s ok,” (and act genki, of course) but we both know that she’s hiding her true feelings. Such is the case here. I would give anything just to get an honest reaction from some people, instead of this veiled, confusing, misinterpreting genkiness.

There’s so much carnage in the world right now I’m not going to even broach it… then again, does it ever really let up? I will say this regarding everything that’s going on in schools lately (well, the past ten years). I’m not in high school, nor have I been for six years (wow, that sounded weird to say). I believed back then that school was more stressful than work because there is no barrier between your school life and your home life – homework always beats you into submission. That opinion at the time came from a place of ignorance, as I wasn’t in the working world. Well, now I am, and I still believe this to be true. Stress in schools just builds higher and higher, and that’s to say nothing of the social pressure, which is probably the worst you will ever encounter in your life. People underestimate just how thin the line is between despair, loneliness, anger, and lashing out. Try to understand. I know where these feelings come from – I can’t condone their actions, but I think I understand that kind of desperation.

Completely unrelated: I’ll be doing an excursion into Diamond City just east of Hiroshima on Monday to explore the shopping district. Should be a fun afternoon. If you’re heading out to the Sake Matsuri, Deo Deo in Hiroshima sells cheaper ¥1000 tickets, rather than the ¥1500 you have to pay at the gate.

Tired of buying phone cards? Check this site out for international calling.

Scarlett Johansson – I liked you before Esquire, and my friend should have given you my number at that club in Chicago. Meet me in Tokyo, foreigner-to-foreigner. Your beauty is eclipsed only by your intelligence.

I’ll make it there someday…