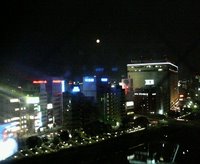 Sam Beckett taught us so much

Apparently the nightlife scene in Hiroshima is much worse than I had originally suspected. I just received word from a very reliable street snitch that the raids are continuing in an attempt to flush the foreign presence from Nagarekawa (or at least funnel money into Yakuza-controlled bars). Those clubs that haven’t been forcibly shut down are doing so of their own volition. Enter this area with caution, or the Hiroshima police, their strings most likely pulled by the Yakuza, will demand you produce your gaijin card, and may even detain you.

This is hardly the first time I have felt the Yakuza (やくざ) presence in Japan. The Japanese mofia’s presence is wide-reaching, but to be honest I saw more of them in Okayama than I did in Hiroshima. They enjoy coasting down a crowded street in a bus, with loudspeakers blaring, spreading their glorious message. Also, if you’re a recent migrant, you might want to be careful about having any tattoos – these are directly associated with the Yakuza, and may prevent you from joining a gym, entering a capsule hotel, or enjoying an onsen. Of course the Japanese realize you’re a foreigner but it’s a one-dimensional mindset. Tattoo=Yakuza. They may not necessarily believe you’re a member, but like it or not, your appearance is a mental association people just don’t want to see…

President Bush’s declaration to the world. Very straightforward, isn’t it? I know I’m not the first to mention it, but I still think this comes off as a very inconsistent, if not hypocritical, message we’re spreading around the globe. Regardless of whether you agree or disagree with the Iraq war, all sides admit we took action based on very little substantiated information. We attacked, invaded, based on a possible threat, a potential threat, to the stability of the world: Iraq or Saddam having a nuclear capability (except for those blood-for-oil theorists, whom I’m not going to rule out).

So – dangerous nation in the middle east. Solution? Attack, disarm. Dangerous nation in Asia. Solution? Sanctions, and political condemnation. And the US attacked in Iraq solely on the possibility of nuclear weapons. South Korea has proven they have a program in place, yet the world’s reaction is somewhat lacking. Granted, you don’t want to exactly declare open war with a nation that now possesses such weapons.

What is the difference between Iraq and the DPRK? Plenty. For one thing, I don’t think we had to worry about serious retaliation from any neighboring or Iraq-friendly nation coming to their aid. Whereas China has strong economic ties to North Korea in addition to being in the nuclear club. The enemy of my enemy is my friend; or, in this case, the friend of my friend is not someone to attack with aerial strikes. I know I’m only skimming the surface here, so take this with a grain of salt.

Still, I believe The Daily Show summarized this disparity in foreign policy best:

“…compared to this time with Korea when there’s no talk of military action and the threat seems much stronger.”
“To the contrary, Jon – the threat that North Korea will make a bomb is gone. They have made the bomb. The threat has become reality. And, as you know, reality is the realm of foreign policy we’re least successful at.”
The Daily Show: October 9th, 2006

Unrelated, unless you believe everyone is concerned with North Korean food

As far as the Japanese diet is concerned, I’m learning more and more each day. As I mentioned, someone new to Japan who is trying to build or maintain muscle might have a difficult time finding a solid source of protein; the Japanese eat extremely well, but for the most part they have very slimming foods: rice, fish, chicken, lean beef. However, even more so than the quality of food are the portions of food, which I believe is the key to not being fat

Americans are fat. Yes, they are. American kids are fatter. And why? Well, many reasons – technology that induces laziness, fewer social standards, and I believe, large portions of food everywhere. Restaurants serve up huge steaming plates that we would never completely devour if they weren’t right in front of us. It’s too tempting, and it would make us feel bad by not taking advantage of the money we paid for food.

I think Japan has caught on to this concept, and adjusted it’s portions according: small serve ice cream, a few pieces of chicken on a stick, hamburgers about half the western size, and overall, the Japanese dining experience has you order dish-by-dish, so no food is left over. You can still get fat (I’m amazed when I see a corpulent Japanese woman, though) and you can still build muscle, but it requires a little bit of effort on your part.

Homework for tomorrow – imagine having a conversation with yourself at age 8. What would you have changed? Think. Explore. Dream. Discover. Good night.