In case you haven’t been following…

October 3rd
North Korea makes a statement to the world that it will commence a nuclear test. When? No one knows. Where? We can only imagine. Why… “to settle hostile relations between the DPRK and the U.S. and to remove the very source of all nuclear threats from the Korean Peninsula and its vicinity,” namely the United States.

October 4th
The United Nations (UN) is divided on the best response to the North Korean threat. Meanwhile, the United States takes a firm stance, so says Assistant Secretary of State Chris Hill in a US ultimatum: “(North Korea) can have a future, or it can have these weapons. It cannot have both.”

October 5th
The UN makes an official statement coming out against the DPRK (Democratic People’s Republic of Korea) nuclear test. There is growing concern about Japanese and South Korean nuclear programs in response to Kim Jong Il’s decision. Six-party talks between the United States, North Korea, Japan, Russia, China, and South Korea are planned. In addition, the DPRK requests bilateral discussion between the US and itself. Kim Jong Il holds an unprecedented military rally for the KPA (Korean People’s Army).

October 6th
The DPRK nuclear test is believed to be planned for this weekend, October 7th-8th. Further pressure from the UN for North Korea to cancel this “unlawful” test, stating that such a test “would not help anybody including North Korea” and would most likely destabilize the region, if not the world. Japan is at the forefront of this debate, and steps up their monitoring of the northern neighbor.

October 7th
Further speculation regarding the time and place of the nuclear test. A reliable Chinese source provided information that the test would be conducted inside an abandoned mine shaft on the northern DPRK border. Tensions rise in the DMZ as shots are fired and soldiers are redeployed.

October 8th
Japanese Prime Minister Shinzo Abe visits Chinese President Hu Jintao (a visit planned before word of the nuclear test had reached the media) and together called upon an unconditional cancellation of the North Korean nuclear test. Unfortunately…

October 9th
At 1:36 AM (GMT) the Democratic People’s Republic of Korea announced a successful nuclear test in the city of Hwaderi. Both US and Japanese seismologists have unconfirmed reports of a tremor consistent with a detonated nuclear weapon – an earthquake of 4.3 magnitude on the Richter Scale in the general vicinity of North Korea. 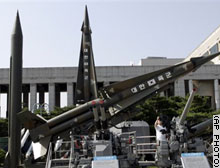 There has always been speculation regarding the Japanese pacifist constitution – now this country needs to ask itself… instead of merely creating a convenient loophole in the system to deploy troops to Iraq, as Prime Minister Koizumi successfully accomplished before, will PM Shinzo Abe have to flex his authority so soon, by creating a serious political debate about a Japanese nuclear program? Will the constitution be revised, rewritten, in the face of a very real, very imposing threat to the future of Japan?

Although many have argued that creating such a program would create a schism, not a bridge, with neighboring countries, one just can’t help but hope for the best. Even in the face of an impending North Korean test, Abe continued talks with China and South Korea. This may have been nothing more than a necessary diplomatic gesture, one which may fall flat if Taiwan, Japan, or South Korea are called upon to develop their own programs.

For now, you be the judge. I’ll doing nothing this week but talking about this recent test and what it means for the future of Japan and the entire region. Maybe this is cynical since I read most of the reports following the test, but I never saw this issue being resolved with diplomatic measures. I don’t believe we should’ve invaded, either. No, there was just no way out. No simple solution.