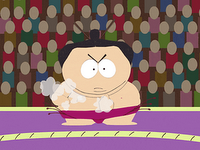 Enjoying South Park as much as the Next Guy

“True disiprin… come from within”

You know you love me… even though I don’t really have a thought-provoking entry for today… give me time. Welcome back, heroes. Today was my first experience being treated like a foreigner within public transportation. I’ve heard from other bloggers that we foreigners exude a certain “sphere of influence” when sitting down on a train, city bus, shinkansen, etc, that prevents Japanese people from sitting next to us. In actuality, Japanese people don’t want to sit next to you to avoid being the center of attention, i.e. the one Japanese person sitting next to the foreigner.

I’ve been here four months and traveled to three major cities… still hadn’t had this happen until today, on the Hiroshima city bus. The bus was completely jammed pack with people standing and sitting, yet the seat next to me remained unoccupied. It was kind of funny. Regardless, it’s hardly insulting after living in Japan for so long. But if you’re new to Japan, you often find your yourself being an embarrassment to all foreigners… “I don’t understand… I can’t read Kanji… I speak a little… help, please.” It’s always a submission on your part.

When you do manage to accomplish the simplest task in Japan, there are some Japanese people who find this absolutely amazing, just mystified that you are capable of living your life without them. I know we foreigners have to put in more effort, but I just can’t stand to be around these “stupefied” Japanese types for too long. I order at a Japanese restaurant… they say “eeeeee!” and clap. I tell them I’ve been traveling, they do the same (not because of where I went, just that I was capable of moving my body inside of Japan without their help). Again, it’s not intentional, but it’s not behavior I want to be around if I have the choice. Eventually they might calm down.

In other news, Diamond City in Hiroshima is an excellent shopping area – take the Tenjingawa stop on the Sanyo Line. Unlike Canal City in Fukuoka, or other shopping areas in Hiroshima, this one really had the feel of home: open spaces, no concern about having stores crammed together, variety of foods, all English name stores, including their version of Spencer’s Gifts. If I were to randomly wake up after being relocated somewhere on Earth, I would swear this mall would be in America.

Huge theatre too – Thank You For Smoking will premiere in Hiroshima on October 14th; truthiness at its finest. Colbert would be proud. Go see this movie if you haven’t already.

If you are buying Sake Matsuri tickets, they sell them at the Deo Deo in Hiroshima for ¥1000. Go to the ticket office on B1.

The best travel agency for foreigners west of Osaka is Travel With in Hiroshima, next to Parco. Talk to Tanaka-san.

For the runners – even though I missed the registration deadline, I’m going to try to get out to Tokyo the weekend of February 18th to show my support for the marathon, and see the city of course. If any one of my readers is signed up for this race, please let me know – I’d love to have a firsthand perspective, and I don’t want to run this race bandit.

For those exercise-minded people, I am still having trouble finding a good source of protein here in Japan. Right now, the only option I can see is buying supplements at stores like Sports Authority, something that I’d really prefer not to do.

I now have three online mapping tools for runners:

This place can make you a custom hanko (name stamp). If you’re in Hiroshima, they have a store right next to the Shinkansen underground tunnel in the station.

Hanko wa tsukutte hoshii no des ga. Dekimas ka?
“I want to have a hanko made. Can you do it?”

Next time I’ll be introducing you to the appropriate Kanji used during most Japanese paperwork (I’m serious about this one – could really help some people out with point card applications, race entries, money order slips, etc), telling you my opinion on human interest stories (their goal is to slowly destroy the world’s intelligence), telling you my experience with Pachinko, and reviewing some skiing areas in Hiroshima. I’m looking into catching a ferry, not an airplane, to Okinawa for Golden Week. Fret not – cultural observations and criticisms are always in the works, and we will continue exploring social behavior. Did anyone want me to make a podcast?