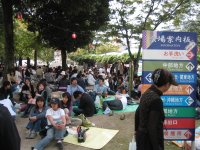 A great series that shouldn’t have ended…

“I want you to look me in the eye and promise you won’t get behind the wheel without some kind of alcoholic beverage in your hand.”

And speaking of… the 2006 Sake Matsuri kicked off this weekend in the small community of Saijo, home of the University of Hiroshima and… well, nothing else. This suburban setting, while usually vacant, found itself flooded with 100,000+ foreigners and Japanese alike. A mere five minute walk from Saijo Station, pedestrians could enjoy the crowded streets, filled with promiscuous Japanese girls and assorted salted meats on a stick. 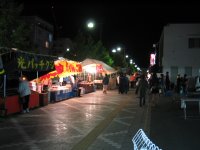 Although most foreigners who make the trip to Higashi-Hiroshima for this event spend the entirety of their day in the sake park, people tend to forget that this is no different from any other Japanese festival – children are common, food is everywhere, live music, good conversation, and big crowds.

Although there is plenty of PG-rated entertainment, the real action occurs in the sake park, a breeding ground for shots, drunken behavior, and accidental collisions. If you’ve never been to the sake festival, here’s how it works:

2. Enter the gate. You are given a guide with every single type of sake offered in the park – there are hundreds to choose from – and a single, small sake cup. This cup is your lifeline. You cannot drink without it, and it can’t be replaced without another ticket.

3. There is food and drink inside the sake grounds, but the booths don’t accept cash. Now, you have amusement park rules – you have to buy vouchers for anything that’s not sake in ¥100 increments.

4. There are booths scattered around the park, each with about 8-10 lines of people clammering to taste the different varieties of sake. You can have as many refills as you want, but they will only fill your small sake matsuri cup.

5. Enjoy the random conversations as you both catch up with your old friends and feel the unity between foreigners you don’t know and yourself. Some Japanese people will take you by the arm and offer to get your sake cup filled. Others will look at you shamefully. Others are too friendly, walking right up to you and slapping you on the shoulder. Maybe they’ll be saying “drink with me!”

6. Once you leave you cannot re-enter. I don’t think this has ever been a problem, as I didn’t see anyone leave until they were kicked out.

Since I’ve never been to Tokyo (incidentially, some guys did come in from Tokyo just for this), this was the largest gathering of foreigners I’ve seen since I arrived. I forgot what it was like to not have to worry about finding someone who speaks English.

You May Say I’m a Dreamer

I know I’ve mentioned before that I understood the role of alcohol in Japanese society – it’s more sociably acceptable; in fact, it implies a great deal of information about your social status. But… sometimes I really just feel pity for those people who drink themselves to a drunken stupor. Maybe it’s just because I’m in Japan, and I don’t really want the stereotype of the drunk, loud, obnoxious America to proliferate.

I’ve got nothing against having a few drinks, enjoying time with your fellow man, and feeling your ambitions lower themselves with the effects of alcohol. I freely admit I did not understand this in high school, but I’m starting to take a more liberal stance. Even considering that, I don’t see the point of some people drinking themselves to the point where they can’t walk upright, start yelling for no reason, throw up, and have to be dragged home by the collar.

Call me whatever you like – loser, downer, whatever – but that’s really how I feel. I still go out with friends and have fun because that’s a social thing to do. But imbibing so much that you can’t even stand up straight… well, maybe if it were because a girl wanted you to… we’re all slaves to passion. Still, I can’t ignore some of the drunken activities from both Japanese and foreigner alike this weekend – one trashed the checkout line at Fuji Grand, another hit a sweet girl square in the nose with a football (she later rebounded and had a swordfight with a kid – see below), while others just grabbed trees and bushes in an effort not to fall down.