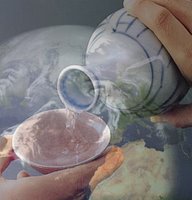 I can be clever too

I have an opinion, nothing more

Being ignorant about the state of the world isn’t exclusively American. Nor is really a western idea. I know there are people out there who can never get enough to eat, never see the inside of a school, have known nothing but pain and violence their whole lives… In the “civilized” world, we have our color TV, our internet, our air conditioning, our nice leather couches set by the fireplace. If we travel, if we get bored, we can go back to that life; we can return to the world we left behind. Some people can’t, and that keeps us from understanding the world we live in.

I don’t understand this, because I am ignorant. I don’t want to be, but other than abandoning everything I’ve ever known and choosing to live a life all those in it may be trying to escape, there is no option.

We shouldn’t pity them any more than we pity those in cultures different than our own. Nor should we try to “save” them, believing our way of life is best and exerting our authority and values upon people who aren’t ready. This is the world. People die every day. Women are raped. Children starve. Atrocities that we believe can’t happen, do happen. And as much as you’d like to believe that the western world or excusively, America, is a shining beacon for others to follow, think again.

This is a double-edged sword; lack of civilization as we know it doesn’t necessarily mean violence or chaos, it’s just a different culture. Again, I’m leaving you wanting in terms of useful information. But this is an opinion, nothing more.

Not the best sound bite, but a good one…

So if you’ve seen nothing… if this remains unknown to you then I would suggest you allow the fifteenth of October to pass unmarked. But if you see what I see, if you feel as I feel, and if you would seek as I seek, then I ask you to stand beside me…
Paraphrased, V for Vendetta

In honor of this weekend’s Friday the 13th and the upcoming Halloween season, I’m happy to bring you information on the “shock and awe” scale. And by “shock and awe”, I mean “look at for a few minutes, then click out.” Hey, it’s still interesting.

The biggest cultural difference in Japan as far as superstitions are concerned would be surrounding blood types. Although I had touched upon this before, it’s something that I believe is uniquely Japan. Japanese people look at the Zodiac too, but it’s more common to believe a person is Superman with type A or a Will Farrell knock-off with type O. Just as commonplace as horoscopes or palm reading.

Just as the number 13 is typically avoided in the western world (if you’ve been to a few hotels that don’t have the 13th floor), so is the number four in Japan. I’m not entirely sure what our reason is behind this fear, but the Japanese think a little more practically. In their language, the number four is pronounced shi, the same as death. The number nine (kyu or ku) rhymes with a different Japanese word meaning pain or suffering.

Other Japanese superstitions I have heard firsthand

If a funeral car passes you should hide your thumb

If you cut your nails at night, your parents will die young

If your fingernails grow long enough, clip them and make a wish (only for girls)

Skydiving, Rocky Mountain climbing, and riding on a bull named Fumanchu, signing off…