Yet another reason to go to Okinawa…

Judas, Brutus, and Cassius would repent over and over again to avoid sinking down to the next level of Dante’s Inferno… the pachinko parlor. Pachinko is the Japanese gambling game. Think of one of these parlors as a regular casino, without the fun. Even that’s giving it too much credit.

First step – find your parlor. No problem there if you live in Japan. Chances are even the smallest town will have at least one parlor within walking distance. It’s that big of an infestation here. I even discovered a Pachinko Slot Texas in Hiroshima.

Be careful of the noise. Unlike in American casinos, which are relatively loud, pachinko parlors have music playing at around one decibel below the threshold for pain. All parlors are like that, and you can’t even tell from the outside – those are some quality soundproof glass doors.

Third – get your money. You don’t have to go to a ball changer depending on the parlor (some machines will do it for you), but I believe you can only use ¥1000 notes in the machine. Some places might have a charge card system set up, I just haven’t seen it yet. Incidentally, ¥1000 doesn’t give you that much playing time.

So what to do? Stick in the money, and receive your pachinko balls. Small silver ball bearings, which are probably engraved with the parlor’s design. ¥1000 will only get you about 50 balls or so.

Pachinko is not only pinball, but also a slot game – your machine should have a display screen in the middle which lets you choose which “style” of slots you’d like to play. At this point the balls should be piled up in a small compartment in front of you – leave them there. You only hit a certain button if you want to “cash” out (i.e. make the balls fall into your ball tray).

Here’s where I just don’t see the entertainment aspect. You choose a game, and you turn a knob to let the balls go into the machine and fall down (like an upright pinball game). That’s all. No control, no cards, no fun. If the balls fall into the right slots of their own accord you have a chance to spin the slot wheel. Or if enough of them fall in the same slot I think you get some money. It was pretty confusing, but it still didn’t have much appeal. Play until you’re out of balls or keep winning.

Some people use this to subsidize their income. Just like Vegas, you can come in with ¥1000 and walk away with ¥40,000. But I really can’t give it my recommendation. I’ll stick with blackjack if I go home – there’s a game with probability. What does surprise me, besides pachinko, is just how many grown men I see in ordinary Sega arcades in the middle of the day, playing games that won’t pay out. I know we’re in the country that practically invented the video game, but it’s kind of sad to see so many slot jockeys. 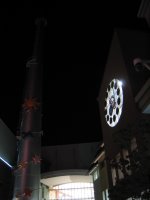 My Japanese movie experience was surprisingly better. I took the opportunity to see Thank You for Smoking at Diamond City outside of Hiroshima. Nice theater. As one might expect, there really isn’t that much of a difference… with the exception of assigned seating in movies, and a point card system. Typical of Japan.

Just like with most Japanese venues, the price of movies goes down after certain hours, and there are specials on certain days. It varies from theater to theater, but if you’re seeing a show after 9 PM, I believe the cost is much less. Usually you can count on movies running from ¥1000-¥2000.

I’m looking into taking a sleeper car to Tokyo for the holidays, catching one of two nonstop flights to Dallas, and returning in time for Shogatsu. Using the Seishun Juhachi Kippu to travel back to Hiroshima will be scenic, cheap, and relaxing. Travel With has a website as well. Wakatta?