“It’s more than just a race, it’s a style. It’s doing something better than anyone else. It’s being creative.”
– Steve Prefontaine

Hiroshima Peace Marathon
My first Japanese racing experience. Quite a benchmark for someone who has been marketing himself as a “Gaijin on the Run” for the past five months. Nevertheless, I competed with distinction and honor. Well, as much honor as one can have calling himself a gaijin.

At this point I should point out that I’m an idiot. I looked at the racing flyers, I read the map, and for some reason I convinced myself that the starting line was at Hiroshima Baseball Stadium, not Hiroshima Stadium in the middle of Hiroshima Prefectural Sports Park. As such, when the tram dropped me off near Sogo shopping center, I assumed I had a leisurely ninety minutes to warm up, stretch, and enjoy running talk with fellow gaikokujin… how wrong I was.

I spent the next hour searching for the correct starting line, wondering if I would make it on time, and telling myself that I should just give up. Luckily I don’t quit that easily. If I could wait in line for a restroom for an hour before the Boston Marathon, I could walk a few kilometers to run my first Japanese 10k. Eventually I did locate the stadium by chance, after hearing the racing announcer on loudspeaker. Lucky break. 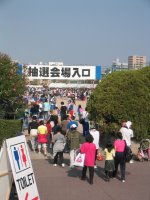 Check in was at the foot of the stadium near the running track. The whole place was filled with runners doing sprints, warm ups, stretches, and just relaxing. I was supposed to have checked in before 10:50; fortunately the typical Japanese standards of lateness didn’t apply to getting bib numbers. I received mine without causing too much inconvenience.

Already I was looking for some international differences in racing… there weren’t too many. Bib numbers were required to be worn on both front and back, but that could just be for this particular race. Time chips were the same design, also worn on the feet. Everyone was dressed roughly the same way, same pre-race routines. Nothing out of the ordinary.

Naturally, I was running a little behind schedule. I barely had time to slip off my warm-ups, apply suncreen, attach the racing numbers, and stretch before 12:20, the official start time. There weren’t too many convenient places to store my bag, so I had to settle with hiding it under a wooden sign stand. I later learned GetHiroshima would have happily taken it under their tent. Bag safety, at races, train stations, or otherwise, has been a growing concern lately; things aren’t as safe out in the open as they used to be. Is this the result of foreign influence? 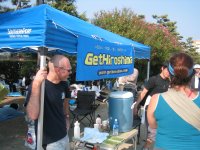 I was already soaked from sweat, having walked from the city proper to get here. I hadn’t hydrated as much as I would have liked. But, my legs were strong, my muscles loose, and my resolve firm. My T-shirt on my back, I set myself out ahead of the pack. There might have been 500-600 runners in the 10k.

One major difference (besides the fact I couldn’t understand “on your mark, get set…”): no gunshot start. Not even a whistle. Just the announcer saying “Go!” Not really an issue, though, as I was keeping my eyes peeled for foreigners whom I might like to pace off of. There might have been a dozen or more in the 10k. I think I beat them all. 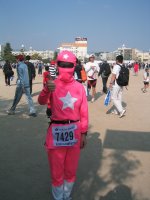 The first half (5k) was no problem – never got passed, and took on about a hundred people. Got them all. There were no water stops and no kilometer markers until the turnaround point, however. Once we did head back for the finish, there were stops and markers at every kilometer. No Gatorade or energy drinks, just water. Still, it was reasonably well organized, given the amount of people competing. Lots of fanfare shouting “gambatte” (good for cheering on at an athletic event), even people I didn’t know. You even had the practicing-English crowd yelling “Go! Go!”

It could have been colder than day. The sun wasn’t really baking me as there was a nice breeze, but still, probably drained me more than I care to admit. No negative splits this time. Maybe 2-3 people passed me and stayed within eyeshot until the finish; I suppose I could have caught them, but once I saw I wasn’t going to win, I just wanted to take it easy and not stop. Reduced to this… a marathon runner actually considering stopping during a measly 10k. Still… I do that at all my races. I’m probably one of many people who questions his sanity at the start of every race. We always feel better about it afterwards.

Beautiful views – the first and last kilometers take you across one of the inlets and give you a great view of west Hiroshima. Highly recommended running path if you live out there. Once my legs starting throbbing and my forehead decided to warm up, I decided it was time to end this thing. I throttled in to the finish for a nice 39:21 clock time, 39:04 chip time. Otsu kare sama des. That’s about a 6:17 mpm (minutes per mile) pace.

Kudos to the students of Hiroshima International School – I think they all ran the 5k, and stuck around the finish line to cheer on the foreign runners. Thank you. I’ll return the favor someday. After the finish, chips were collected, winners’ certificates printed on the spot, and award bags distributed. 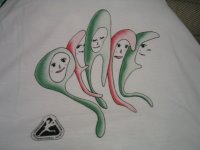 My special thanks to the people of GetHiroshima and David Koerner, who was offering free post-race massage therapy. GH (GetHiroshima) had a tent set up with free towels, Gatorade, and English conversation. Good people. 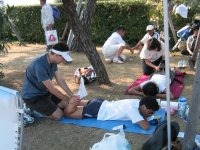 Where you might expect some protein boost in the form of sausage back home, in Japan… ramen, yakitori, dessert crepes, and carbonated beverages. No complaints here. They did have the standard free yogurt for entrants, though.

That’s my report on your typical Japanese race. I never realized it before, but you don’t really need to listen to anyone (announcer or otherwise) during the warm up, race, and cool down, so it’s especially good for someone like me, who needs to improve his listening skills. What’s next? Running across Miyajima, and looking into the Osaka Marathon.

Thank you heroes. Wish me well, and I will do the same for you.

Pictures of the Race
The Course