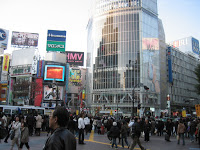 Tadaima. I was repatriated, but not for too long. May be trying to go to Las Vegas for my birthday in a few months… either way, I need money. Lots of money. I don’t care whether it’s Yen or dollars. Any ideas? I’ll give you some too – always looking for more comprehensive links for my “Living in Japan” linkbar.

Tokyo breaks all the rules. I said it before, but now I speak from experience: there are two countries here: namely Japan, and Tokyo. Lost in Translation was quite right to choose Tokyo, rather than any other Japanese city.

I’ll have a full report on my un-Japanese experience shortly. In the meantime, a few updates.

Take note – six months in, and listening is coming pretty naturally. At least in terms of numbers. I can understand the transfer information announced on the Shinkansen and in stations. Must have heard more loudspeakers on all the city blocks, stations, trains, subways, and buses in Tokyo than I had in my entire time in Hiroshima.

Also in terms of listening – discerning foreign languages from Japanese is relatively simple. Of course, I’m the kind of person that practices isolating voices when he’s in a crowded restaurant. A useful muscle to flex. Japanese is very fast, but also dull, quiet, and has a certain melody. It conveys humbleness. Foreign languages like English stand out – expressing volume, individuality, harshness, irregularity. It would be as if you heard a Japanese person speaking very slowly, loudly, and exclaiming “SU…MI…MA…SEN” to a person on a train with their own flair.

I found a great English bookstore in the Roppongi Hills shopping area with some good language books, but for now I’ll sticking with the standard Basic Kanji Book, a nice way to practice brushstrokes.

Fear and Trembling is a quick and fascinating read. It follows the life of a Danish girl born in Kobe who pursues a life in the Tokyo corporate world. This is during the pinnacle of the Japanese domination of the business world (assuming you don’t think that’s still going on): the 1980’s.

Granted, this was a unique experience. Very, very unique. But it still rings rather true to a story I read not too long ago on Trans-Pacific Radio about bullying in the workplace. That, coupled with a choice Law and Order episode, leads to a natural conclusion: some women can be frighteningly evil if given the chance. So can men… I just don’t expect it from women for some reason. I don’t play to gender stereotypes, but I can’t help but think how they affect how I view gender behavior.

Let me sum this up: a woman gets hired by a reputable Japanese company. She makes a questionable first impression (yes, that was her fault). She serves tea and coffee for her first few weeks (quite common for a newbie). Essentially it follows a series of repetitive and pointless tasks she is asked to perform. She had the opportunity for advancement, only to have it snatched away by a jealous manipulative co-worker. Eventually she ends up replacing the toliet paper in the bathrooms. Her dignity (at least on face value – at her core, I believe she kept her dignity), is removed piece-by-piece, her individuality never asserted, her intelligence never used for the good of the company.

Japanese businesses work. They work rather well, of course. And they work on the principle of group mentality. The needs of the many are paramount. There are no individual needs. If you happen to assert those, you be struck down like an insolent fly. American and many western companies differ in that approach. We believe workers should work for themselves and the group. Maintaining some level of independence. Respecting an individual’s opinion. Sometimes it’s to the detriment of the whole. Sometimes it’s not. But it also works.

The willpower and steadfastness this woman exerts is incredible. If Japanese people are required to show half as much restraint as she did in the workplace, it’s a miracle the entire country hasn’t resigned. After being continuously demoted, she refuses to resign, refuses to disgrace herself even further in the eyes of those around her… even those who put her in such a place. I honestly couldn’t do it. Maybe that’s the western brain kicking in, but no reputation is worth what she went through. Maybe I’m shallow. Read this book.

Kyoto Station is probably the most impressive I’ve seen in all of Japan. Futuristic, simple, and practical. Well-designed. You could spent hours here taking pictures from every perspective, and you have a great view of central Kyoto from the skyview garden.

Hiroshima Station, as well as many of those I’ve encountered in western Japan, isn’t very modern. I’ve often wondered why they don’t upgrade to the automatic ticket gates you see in Tokyo, or even Fukuoka. This leaves it with security about as reliable as the Gantoku Line in Yamaguchi (small, small, small line for country towns).

The Moonlight Nagara train, running between Tokyo and Ogaki, departs at 23:43 from track 10 in Tokyo Station. The train is entirely reserved seating from Tokyo to Odawara, then becomes cars 1-3 reserved and cars 4-9 non-reserved. After Nagoya, cars 7, 8 and 9 are detached. More details to follow.

After my experience with the cheap and “unconventional” side of Japanese travel, I’ve decided to just stick with what works. Time is the priority, not money. The Shinkansen and domestic airline travel are best. 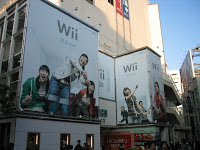 I don’t know why I didn’t bother to research this before, but Nintendo’s corporate headquarters is located in Kyoto, not Tokyo. Not a swallow’s flight away from Kyoto Station, if there were any Japanese swallows.

To satisfy your desire for all things foreign in Japan, be sure to remember: Lawry’s: The Prime Rib in Asakasa Twin Tower, Tokyo. Cold Stone Creamery in Roppongi Hills, Tokyo. Outback Steakhouse, next to Roppongi Station. Gold’s Gym adjacent to Nijo Station, Kyoto.