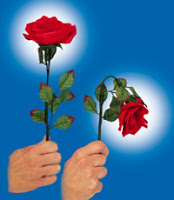 My apologies for taking a week to blog. I’ve been really lazy this week, but I did manage to secure my plans for going to the Sapporo Snow Festival. I added quite a few new links to my side bar, including a fellow runner’s blog from Okinawa. Check it out – Running in Okinawa. Although I might be faster than he is, my blog is sorely lacking the organization his has; I’ll start working on getting JPG images of my running trails and a proper page set up.

Well… it’s been eight months. My eikaiwa contract expires in four, which means… life is beginning all over again. Searching for a job, a life, a girl, my place in the world. For the most part, my time in Japan has been a positive experience. I’ll never regret coming here. But, should I stay? Here’s what’s going through my mind right now. I feel as though part of my life has been blossoming, blooming into a wonderful, brand-new shape. Yet another is withering, dying from lack of use…

One of the hardest things in the world to accomplish in a lifetime is to convince yourself you’ve made an impact. People will remember you. Your presence in this world had some significance. Being a foreigner in Japan gives you a taste of what it’s like to be a minor celebrity, especially if you stray away from places like Tokyo. I must admit that feeling rubs off on me a little. I enjoy it. I enjoy standing out in a crowd, catching people’s eyes, knowing they’re thinking about me. Pure vanity? Absolutely, but it’s comforting in a way.

Some of my creative skills are being brought out by the land of the rising sun. I have inspiration to write, to read, to imagine new possibilities. Japan has such amazing places to photograph. Studying the Japanese language gives me a chance to keep my mind active and alive. Studying Japanese history gives me a new insight into a world I had never known.

The quality of food here is excellent. I had never eaten sashimi before, and traditionally stayed away from most fish. I have broadened my palette with octopus, eel, raw chicken, raw fish, liver, okonomiyaki, and the rare blowfish. Japanese food is good for your health, good for your spirit. Green tea lengthens your lifespan.

Travel is extremely convenient, no matter where you’re based. I can get to Tokyo within the day. I can be eating ramen from a yatai in Fukuoka by nightfall. Being in this part of the world gives me greater access to vacation destinations never thought possible from the US. Australia. New Zealand. Taiwan. China. Cambodia. Singapore. The list goes on… all for the taking.

In addition to attention on the street, I receive lots of casual attention from Japanese girls. I was hardly a loser back home, but my being foreign definitely gives me a leg up on the dating competition over here. Basic statistics will set you free. 1% foreigner population. Millions of Japanese girls.

Finally, I have to say the experience itself, actually coming over to Japan and trying to make a life, was very worthwhile. Attempting to integrate myself into a foreign culture has had its ups and downs, but overall, I’m grateful for the time spent here. I was fulfilling a lifelong dream, one first conceived when I was seven years old, playing The Legend of Zelda on Nintendo NES. I’ve been humbled by kindness, humiliated by my own behavior, and exposed to something new almost every day. Not many people can say that.

Standing out in crowd can be both comfort and curse. I may attract attention from the masses, but I’m still alone in a sea of people. Millions of Japanese people, and little old me in the crowd. I feel like Scarlett looking out that window into Shinjuku, searching for her place.

While I am exposed to Japanese, my English skills, my eloquent speaking skills, are lacking. Since I’m not exposed to native speakers every day, I don’t always get the chance to have the normal conversations I took for granted in the states. Sure, I meet friends from time to time, and I use English in the classroom, but it’s not the same. I need discussion. I need controversy, intensity.

Meaningful friends are hard to come by. I have a greater chance of striking up conversations with people I normally wouldn’t, just because we can both speak English, but we usually don’t have much in common. Nor are we the best people to hang out together. Same goes with finding a girlfriend. I have nothing against Japanese girls, but if someone can’t fully communicate with me, she’s not someone I’m going to be socializing with. I expect Japanese people to treat me the same way. If we get along, have a few things in common, and are on the same wavelengh, a Japanese girlfriend would be great. So far, though, None of the foreign or Japanese women I’ve met have appealed to me as significant others. As someone who really doesn’t like casual relationships, this is difficult.

The variety of food. Don’t get me wrong, the quality of food is excellent, but I enjoy a wide range of meals. Mexican, French, Italian, normal size hamburgers… many things are lacking in Japan. I just wish there were a few more restaurants, a few normal sandwiches, and things without mayonnaise or teriyaki sauce.

My job. Lately I feel as though I’m just going through the motions, walking through the part. Where is the imagination? The creativity? Will I be this way forever? Is this what life is supposed to be like, a job with no opportunity for promotion, with the same nightly routine? Is this how people live? I just feel like there’s no room to progress, no path that would lead me to a stable home and a family someday. I certainly don’t want to spent years of my life in the same grey-walled office filling out meaningless paperwork and returning to a small, empty apartment. I am slowly learning Japanese, but without Level 1 proficiency, I’m merely the token foreigner, subject to condescension and the willful glare of a juggernaut manager.

As you may have noticed, there are definitely more reasons for me to stay, but the reasons to leave seem to be weighing more heavily on my soul. So I’m looking for jobs. Both in Tokyo and back in the US. Of course, I’d still be open to another country, but it depends on circumstances. I’ve got no debt, no home, and no future lined up. Any thoughts? Anyone else in this position? Good day.