Social Experiment
Try going to a popular ski resort in a full ski mask, covered head-to-toe, and wear a thick set of goggles. It may be your one opportunity to pass for Japanese. The only other way is to be born Japanese.

I thought I’d successfully infiltrated the ranks of the Japanese snowboarding class, but my western nose gave me away; at least, I realized it did as I was shooting down the mountain like a rocket and some passerby still yelled “HELLO!” at me. Did he honestly think I had enough time to reply?

Mizuho Highland is one of the most popular ski areas in Hiroshima Prefecture. Although I had heard the powder could be rather bad at this particular resort, I decided to check it out anyway. Luckily, it was snowing all day, so the powder was excellent. Other conclusions about Japanese skiing:

1. In Hiroshima Prefecture, the ski areas are incredibly small, given what I’m used to in the Rocky Mountains. Maybe between 5-15 slopes per mountain.

2. Snowboarding is incredibly popular here. When I visited Mizuho the population was 90% snowboarders.

3. Maybe this was exclusive to Mizuho Highland, but they had lift tickets that could only be attached not to your jacket zipper, but to your shoulder with a plastic strap you could buy for ¥200.

4. Almost everything else is the same. Gondolas, ski lifts, rental places, overpriced food.

If you’re traveling from the Hiroshima area to Mizuho Highland, there is a bus (スキーバス) from Hiroshima Station that leaves at 6:50 and 8:45 AM every morning. Be sure to reserve a seat in the nearby JR Chugoku bus ticket office. The bus leaves Mizuho at 5:00 PM and returns to Hiroshima Station by 6:30.

Rental services must be prepared in advance, and JR Chugoku takes care of everything – skis, snowboards, snow pants, heavy jacket, and boots. You can rent the same equipment from a shop on the Highland side (ハイランド) of the mountain, but it’s more convenient and cheaper with JR. 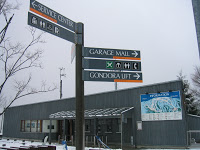 Interesting side note: apparently “nice try” is some form of Japanese kana. I heard a ski instructor telling his students that very line as they attempted to use a snowboard for the first time.