Yoyogi Park is all of these things in one package. I didn’t even get to see the usual attractions given that it was a Japanese national holiday.

If you are traveling through Tokyo, it’s not too difficult to figure out the most Tokyo-esque places are Shinjuku, Shibuya, Roppongi, and the downtown area. Save Ueno and Asakusa for the traditional vacation. Asakasa is filled with embassies and office buildings.

I heard of Shibuya as the youngest district of Tokyo – a place where eighteen year olds shop, relax, and possibly get a room at one of the numerous lovel hotels on Dōgenzaka. Dōgenzaka is an area just west of Shibuya with the largest number and variety of love hotels known to Japan. Vending machine selections, themes ranging from a medieval castle to Star Wars… it’s interesting just to pass through the area.

Shinjuku may have them beat in terms of neon and raw advertisements, but there are still plenty of stores and restaurants in the area surrounding Shibuya station. You might recognize it from a scene in Lost in Translation. Although, the hotel in that movie is actually the Park Hyatt, in Shinjuku.

Yoyogi Park, just like Tokyo, breaks all the rules. Walk about twenty minutes north of Shibuya (or take the JR Yamanote Line to Harajuku Station), and you might find yourself hearing the distant sounds of a rock group. Could be a KISS cover band (very popular in Japan). Could be two girls dressed as vampires beating on a pair of drums. 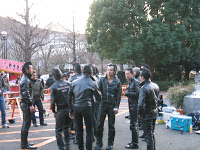 Anything is possible in this park. Visit on a Sunday with decent weather, and you’ll most likely run into a few colorful Japanese artists expressing themselves. Painting their faces crazy colors. Juggling in groups of ten. Spray-painting and dancing as a show. Playing normal music.

Definitely something you should see if you’re passing through Tokyo on a weekend. I don’t know how often people come out during the winter, though. With all the travel options available to you (subway, JR lines, bus, taxi, etc), just be sure to stop by.

Another option – great place to run. Although Yoyogi is in one of the most urban populated cities on the face of the Earth, you don’t get that impression running through the park. It’s quiet. Thick trees on the outskirts eliminate any clues as to the surrounding Japanese apartments (although the skyscrapers in the distance are harder to block out). It’s your own little patch of the country, in your own little running world. The park is clean, quiet, and undisturbed. Enjoy the biking trail, the path leading up to the Meiji Shrine, or just settle for running loops around the grassy area, where kids fly kites and others throw the baseball around.

An interesting fact about Japanese New Year’s festivities – most stores you come across will be boasting “grab bags” anywhere from 1,000-10,000 Yen. Maybe more. It’s quite common. When I was going through the Asakusa shopping area just before the ball dropped, I saw one store offering some bags. Out of thousands, they guaranteed that ten had Nintendo Wii inside, six has Playstation 3, and others had cash. Interesting. It’s probably just a way to burn off inventory.