Valentine’s Day is steadily approaching in Japan. In the land of the rising sun, women traditionally give gifts to men on Valentine’s Day. Men are supposed to wait until March 14th, known as White Day. As is the worldwide trend, this holiday is more popular among the younger generation. Be sure to get your favorite Japanese girlfriend the gift of Shiroi Koibito (白い恋人, “white lovers” chocolate) – famous in Hokkaido.

Shiroi Koibito factory in Sapporo, Ishiya. This factory is a tad Willy Wonka-esque: it has a theme park surrounding it, complete with Oompa-Loompa sized houses. 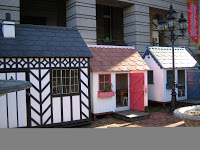 Although there is plenty of skiing to be had in Hokkaido, I’ve been searching for resorts closer to home. Osorakan is a fairly popular area on the highest mountain in the prefecture. There is even a convenient bus from Hiroshima Station.

Most communities in Japan celebrated the Tondo Matsuri this past weekend by gathering in a local park, burning bamboo, and cooking omusubi (おむすび, rice balls). Although these are fairly common in Japan, many Japanese people I talked to didn’t even know about them. Apparently if you’re in a tightly-knit community this ceremony would be quite nice to enjoy the company of your neighbors, meet new people, and enjoy the heat of the flames in cold weather. But if you’re just a tourist showing up to a random fire, you might not be as well received. Still, there are public Tondo Matsuri ceremonies for the masses. One was held in Hiroshima at the Gokoku Shrine near Hiroshima Castle.

I don’t often post English commercials, but this is pretty funny. Thank you Japan Probe and Lost in Ube