Sincerity. Sincerity in expressing gratitude or conveying an apology. The essence of behavior in Japan.

The Sapporo Yuki Matsuri (札幌雪祭) wrapped up this weekend after being on display in Odori Park for a week. Nearly two million tourists typically come from around the world to see this famous Japanese event. People from Australia, America, Russia, and Korea are particularly common.

This year, the snow sculptures did not quite get the attention they deserve. Last Tuesday Sapporo experienced a sudden rise in temperature, putting midday at just over the freezing point. Even those few degrees, combined with the natural sunlight, were enough to dull the features of the best sculptures. The main exhibits were touched up and reshaped, but many of the smaller pieces of art weren’t spared for time. Even locals admitted the quality was somewhat lacking this year.

However, that’s not to say it still wasn’t a great event. Any Japanese matsuri is worth going to, especially on the unique island of Hokkaido. Snow sculptures lined Odori Park along with hot chocolate booths, Coca-Cola drink stations, crabs on a stick, and plenty of kids’ ice slides. It has to be seen to be believed. Near the TV tower are the ice sculptures. Don’t waste your time on these during the day; they’re best seen at night when they’re backlit. There are several snow sculptures each the size of a small building.

There is more to the festival than just Odori; if you take a bus from the #6 platform for ¥200, you can reach Satoland in about 40 minutes. Satoland is mainly for the kids, but still quite a sight. A snow maze, many ice slides, fresh ramen and chocolate covered bananas, and a performance stage.

If you walk past Odori towards the south, you’ll reach the entertainment district, Susukino, in about ten minutes. Here is where we see the major ice artwork. Ice dragons. Ice karaoke booths. Ice shot bars offering Bailey’s and milk. Ice benches to relax. Fish frozen into the ice. Spend about an hour discovering everything, then walk down to Rad Brothers (an easily sighted international bar) for some conversation.

As far as food is concerned, Hokkaido is well-known for its seafood; be sure to sample the crab while you’re there. Or, you can enjoy the local varieties of ramen (also delicious, but I think I prefer Fukuoka-style) in a famous alley with a dozen ramen shops. It’s difficult to find: Ramen Alley in Susukino.

The Ishiya chocolate factory, the birthplace of Shiroi Koibito (white lover’s chocolate), was magnificent. I highly recommend visiting it if you’re in Sapporo. Just a short subway ride away from Odori Koen on the Tozai Line. 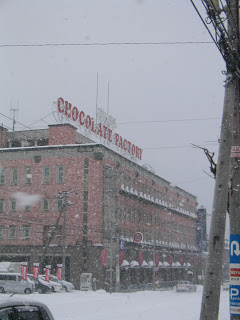 Naturally, a giant sign boasting “chocolate factory” looked like nothing less than heaven as I walked through the snowy streets. The tour of the factory is pretty unremarkable with the exception of a free sample guaranteed to get you hooked; you also might enjoy the assembly line viewing. Cookie. Chocolate. Package. Only three steps.

The real treat is the store at the end of the tour – every kind of chocolate you can imagine. Custom shaped chocolate. They even have a workshop for kids to make their own cookies. My advice: pick up some of the milk chocolate Shiroi Koibito (brown wrappers) and the chocolate drink in a can – it’s absolutely DELICIOUS.

If you’re interested in visiting a nearby onsen, go to the #12 platform in the bus terminal near Sapporo Station. The ticket window there will provide a package deal: round trip bus tickets to nearby Jozankei (an area famous for hot springs), plus a ticket good for a soak at any area onsen. ¥1700 for the whole package.

It’ll take you a little over an hour to reach Jozankei, but if you want a closer option, Koganeyu is also a good onsen spot known for sulfurous waters; I happened to stop here… very relaxing; a few places have outdoor baths right up to the snowy slopes. Spending an afternoon naked soaking in an authentic Japanese onsen while looking at a snowy mountain… priceless. Be sure to enjoy some Hokkaido milk once you finally get out.