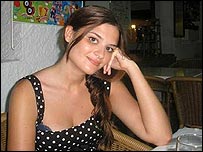 Lindsay Ann Hawker, age 22, a British woman working as a language teacher in Ichikawa, Chiba Prefecture, was found murdered Monday. Police have issued a warrant for the man believed to be responsible for her death, Tatsuya Ichihashi.

Did you know this girl?
– She was 22 years old
– She had been living in Japan since October 25th, 2006.
– She lived in Ichikawa, Chiba Prefecture
– Lindsay Ann Hawker

If anyone in the blogosphere has any information, please contact Richard Lloyd Parry, the Asia Editor for the Times, who recently issued an appeal calling for any information about this case

If anyone has information on this case which they wish to share with a sympathetic and responsible correspondent in Japan, please be in touch.