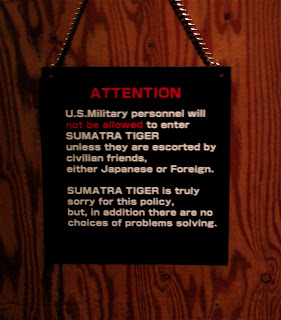 Hiroshima has seen its share of suspicious behavior from the police in recent months; dance clubs were shut down in violation of a never-enforced dancing permit. Almost all clubs in Hiroshima have dancing, but only one club holds such a permit.

When these raids were conducted, “gaijin bars” and clubs were a particular target. The police often sorted the club patrons into three groups: Japanese, military, and foreigner. The Japanese were “released” immediately, the others often required to stay for questioning.

Being so close to Hiroshima, US military soldiers often come from their base at Iwakuni into the city on Fridays and Saturdays to the less reputable parts of town. I will be the first to admit I find their presence a little intimidating at times:

El Barco, an advertised “international bar”, was probably most affected by these raids. Its clientele consisting mostly of eastern European girls and US military forces, it was an easily identifiable target for the koban in these raids.

I will be the first to admit I find this area a little seedy, and the military personnel out of control at times; I wonder if this is the case in other areas of Japan supporting a military base like Aomori or Okinawa.

I don’t know when it was posted, but I discovered this sign (above) on a club, Sumatra Tiger, adjacent to El Barco.

Approximate location of the club

Wouldn’t such a sign demand that all foreigners (at least, “American-looking” foreigners) present their gaijin cards as proof that they are civilians working in Japan, and not affiliated with the US military? And of course, I assume no private club has the right to make such a demand, only the koban or government officials.

I know this is a different situation, but I couldn’t help draw some parallels between this situation and the Otaru Onsen Lawsuit. After all, the main reason Yunohana excluded foreigners in Otaru (despite their logic that “we’re discriminating against everyone equally”), was the presence of Russian sailors.

Look at the individual, not the group. True, sailors can be unruly, just as soldiers can, but to say it’s a case of nationality is pushing the envelope a little far. I’m sure there are members of the US military stationed at Iwakuni who conduct themselves with a little more restraint than their rowdy, uncontrollable counterparts.

I’d like to hear from others regarding this sign. Has anyone had any negative experiences from members of the military stationed in Japan? Do you believe this sign is necessary?