Today, March 21st, 2007… a day which will not live in infamy. Although it is a rather astronomical day – the day of the Vernal Equinox

In Japan, this also happens to be a national holiday. The result? No work, and the chance to march in a Samurai parade in front of Itsukushima (厳島) on Miyajima. 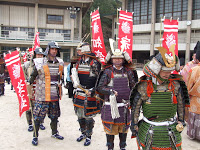 It was a beautiful day for a parade, and a great chance for me to participate. Although I must admit, as the ferry neared the shores of the great island, that the entire “Samurai perception” is one stereotype foreigners have a hard time overcoming about Japan, and I was determined to enjoy this parade just for the fun of it. No more, no less. Let things fall as they might.

An ad on GetHiroshima had alerted me to the idea – ¥10,000 wired from my bank account to the Miyajima Sightseeing Association, and the armor is yours. 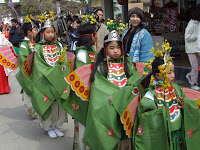 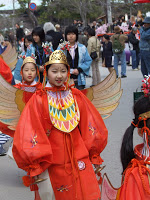 Let’s go over the procedure, shall we? Just like armor you’d see on a Medieval knight, Samurai armor is equally as complex. A yukata, covered with shin guards, three cloth belts, inner clothing, outer armor, helmet, flag, sword, dagger, sandals (not a chance they had a pair my size), arm coverings. 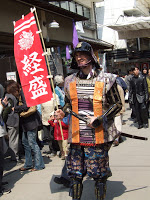 On this occasion, the most ridiculous part to me was having seven different ladies attempt to make my face look Japanese. If Sean Connery couldn’t pull it off, I know I couldn’t. It’s a good thing the helmet covered most of my eyebrow markings; I looked pretty ridiculous. 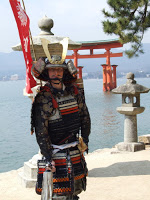 Still, there’s something to be said for the weight of any armor – it makes you feel stronger, more powerful, and you feel a little emptier once you have to lose it. Whether this is imbedded in my mind because I met my first love while wearing armor, I’ll never know, but the world seems more polarized when you start thinking about warrior mentality: love, life, death, honor, virtue, at the hilt of a sword and the blow of a fist. 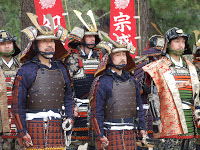 I didn’t attract any more attention than I usually do; the nail that sticks out… and I do stick out as a foreigner. During the parade, people asked if they could have their pictures taken with me; this isn’t a far cry from my typical traveling experiences; the armor is not the only thing separating me from having my picture taken by everyone in Japan.

However, this was a good experience. Despite the calls of “Gaijin samurai! Mite! Mite!” (yes, that really happened), I enjoyed showing off for the kodomo; I’ll never forget the look of amazement on their faces when I drew my sword and struck a pose… priceless. 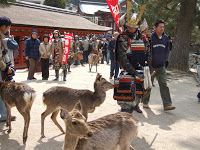