I don’t know what I was expecting. This was clearly a widely-used form of transportation. A high school boy sat behind me, clearly making a commute from the outskirts of Osaka. A housewife to my left, her arms full of shopping bags. A smattering of French and German tourists. Where was the point when modern Japanese civilization ceased and the traditional form of the Buddhist village took shape? It never really happened.

I’m speaking, of course, of my recent pilgrimage to Koyasan (高野山), a town filled with Buddhist temples and traditional monks, perched not too distant from the city of Osaka. I could see the Google Maps route, and I knew trains ran here. Still, I was under the assumption that this village, as a religious center for many Japanese, was more of a rustic 19th century setting. Instead, I found normal bus routes, convenience stores, and internet access in a “traditional” temple.

However, I was far from disappointed on this trip. Let me start at the beginning. Koyasan, about two hours south of Osaka and an equal distance from Wakayama, is easily accessible by rail and bus. After seeing that the train is slowed significantly by the topography, it was no surprise that JR didn’t operate these lines, rather a private railway company.

Wind, wind, wind through the mountains. Change to the cable car. Climb, climb, climb. And suddenly I found myself on a concrete slap, surrounded by a few buses and little else.

If you are planning to visit Koyasan, you should be aware, that despite the fact it might be the road less traveled, it is still quite popular. A number of temples were completely full of Japanese, German, and French tourists when I arrived.

Reserve a temple for your stay on Koyasan, no matter how brief. I say again, reserve a temple. There are no hotels as far as I know, and with the exception of the youth hostel, no other lodging available.

I don’t want you to think I’m endorsing the temples due to lack of options. Far from it. The temples are just as luxurious and comfortable as any Japanese ryokan. They usually run about ¥9,000-10,000/night, and offer you an excellent vegetarian dinner of tofu, miso, rice, tea, and great vegetables, called shoojin-ryoori. As someone who is quite skeptical of tofu, trust me: you’ll want this meal. They offer the same quality in their breakfast menu.

Although you may be served and hosted by traditional Buddhist monks, they are very accommodating to your needs. I arrived without a reservation (planned on the youth hostel, but changed my mind), and after trying four temples which happened to be full, I found a friendly caretaker in the Jofukuin Temple (成福院) who was willing to take me in for the night.

Unfortunately, I had already missed the dinner hour (be sure to arrive early and have a reservation so they can prepare your dinner accordingly), but was treated with respect despite my lack of Japanese skills and escorted to a huge open tatami mat room.

One of the monks promptly came in and served me a cup of tea. We had a nice talk about my reasons for coming to Koyasan and some of my other travels in Japan. I explained that I would be hiking the 88 temple pilgrimage during Golden Week, and tried my best to give off the impression that I was not merely another American otaku. After some mutual bows, I was free to enjoy the rest of the evening.

This particular temple had a great bath area which I partook. Free internet service. A great nighttime view of the garden. If I hadn’t been so tired I probably would have explored the surrounding area under the cover of moonlight.

However, if you do plan to stay in a temple, you should (but are not required to) attend morning prayers with the monks at 6:30 AM (oinori). Most of the monks will be asleep by 9:00 PM, so don’t count on arriving too late and expecting to gain entrance. At 6:20 AM, I promptly leapt out of bed, threw on my yukata, and hurried to the temple. At 6:22 AM, I was told in fractured English to don “street wear” for morning prayers; obliging, I turned back and made it just in time.

Entering a Buddhist temple – take a pinch of ash that is available outside the temple and rub it into your hands.

The temple turned out to be a very elaborate design, with a statue of Buddha and intricate carvings. Two monks entered and proceeded to chant for about 45 minutes, at which point we were asked to make prayers individually. I asked both Buddha and Kobo Daishi for their blessings as I would set out across Shikoku next month, and was met with a clear voice telling me: “You’re on your own, Turner.” Maybe all the incense clouded my mind.

After the prayers were complete, one monk stepped forward and casually addressed us with a story of Buddha. At this time my legs were so painful after kneeling for an hour I had to shift positions often. Luckily it wasn’t just an issue of culture, but of gender – all the women were kneeling comfortably, while the men in the room found it necessary to switch to cross-legged.

A quick bite to eat, a bath, and I was gone, bidding farewell to my religious hosts. My excursions around the Koyasan area – Kongobuji, Daito, and Okuoin – were wonderful, but let me just add something…

Visiting a religious place does not instantly make you religious.
Don’t expect to find enlightenment on a weekend getaway.
You don’t have to pretend to understand, even if you believe it’s being respectful. Soak it all in. The walk from Koyasan to Okuoin is particularly memorable against the backdrop of graves, the oldest of which dates from 1500 years ago. Go to Koyasan to see the sights and experience a different part of the Japanese religious culture, but don’t expect some kind of “quick-fix” to your spiritual issues. I enjoyed seeing the places Kobo Daishi had built, and learned a lot about Buddhism. 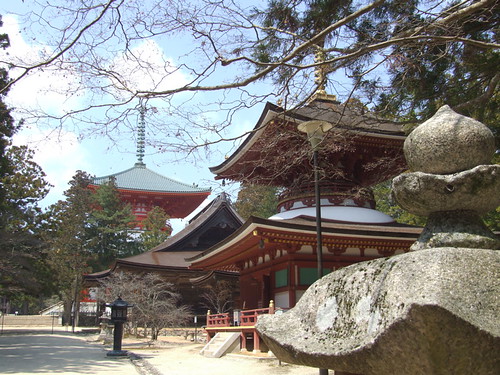 Access
From Osaka, take the Midosuji subway line south to Namba Station, and then follow the signs to the Nankai line. Take the Nankai line all the way south. It’s ¥1,230 to the top of the cable car station. They have local, rapid, and limited express cars.

From Koyasan cable car station, take a bus to the center of town for ¥280.

Update (April 12th): After sorting through my belongings, I discovered that the monks had given me a Vajra (वज्र) – an instrument you can see in Kobo Daishi’s hand. It is said that one uses a Vajra to cut away ignorance, to fully embrace your spirituality and religious practices. I’ll take it with me to Shikoku.