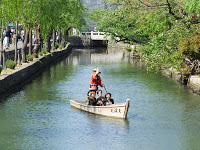 My first journal is written in anything but a religious setting. However, I have already had an encounter that warrants a write-up.

12:25
Take the train to Kurashiki to finally see the historical district around the canal. I will admit this is a rather nice place to enjoy a sunny afternoon or to view the Bizen pottery, famous in this area. However, Kurashiki is hardly a monumental stopping force. A few short hours, a few pictures, and one typical random conversation with a curious Japanese person later, and I’m on the local to Okayama.

4:30
Arrive in Okayama. As long as I was here, I figured a few shots of the famous Korakuen Garden wouldn’t hurt either. The garden was as beautiful and crowded as ever, but it wasn’t until I was already headed back to the station that I had a rather random encounter… 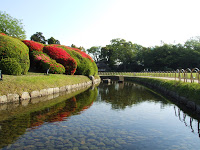 A couple approached me from behind. I didn’t see the man’s face, because it was obscured by a rather large sugegasa – the conical hat normally worn by henro – he was wearing. Upon further inspection, I saw he was dressed in monk garb – white robes (although he had brown outer robes), a purple sash, the sugegasa, and white two-toed sandals.

Naturally, I knew he couldn’t be a henro traveler, because I was still in Okayama-ken. That didn’t stop me from assuming he might be headed the same direction I was… I moved forward for a closer look and discovered: he was a foreigner! And more to the point, he was speaking English to his female companion. Curiosity got the best of me: I had to ask.

If chance encounters were strawberries, I would have been eating a rather large fruit smoothie. I quickly told him I’d be attempting the 23 temples in Tokushima-ken for Golden Week, and passed along my blog address. I really wish I could have stayed and talked about lesser known pilgrim facts, but I think he had to be somewhere.

But, that wasn’t before I learned his name was Kevin (later discovered to be Kevin Seperic, mentioned on the known henro list). He was a monk in Okayama, and he had completed his last pilgrimage in June on his scooter, marking the trail with a series of “X”s in spray paint – very useful. He also confirmed the free lodging I had heard about near Temple 12, which was a relief, because that day will be filled with a lot of mountain climbing.

I’ll be catching an early train on the Marine Liner from Okayama to Takamatsu tomorrow morning.

May the spirit of Kukai be with you.