I say again – all logic and reason should conclude that I be dead. And yet, here I am, writing to the world. Buddhism is mysterious like that.

The trail from Temple 13 to 19 is mostly along crowded urban highways from Tokushima, even if you chose to take the path west of the city. It was probably the most boring day of travel I’ve had thus far, and the most uncoordinated.

If the henro trail from Temple 1 to Temple 10 is spoonfeeding you, then the trail from 13 to 19 is begging you for guidance – you can still find the Miyazaki marks and white henro cloth, but they are fewer in number.

Enjoy the rice fields and rubble-filled sidewalks between Temples 13 and 17, because you’ll only be seeing city streets for the following 15 kilometers.

Temple 14 (Jōrakuji 常楽寺) is set apart from the housing areas right next to a school, but it’s conveniently tucked away by a stone staircase access.

Temple 15 (Kokubunji 国分寺) is in the worst condition I’ve ever seen – there’s a giant pit where one of the temples once stood, and a row of sheet metal shacks leading to the building where you can get your booked stamped. Hardly picturesque. 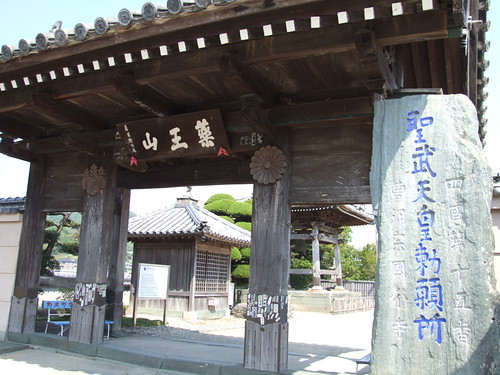 Temple 16 (Kan’onji 観音寺) is another in a residential area and, as such, is quite small. 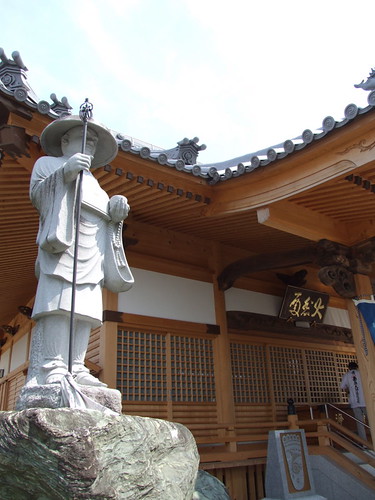 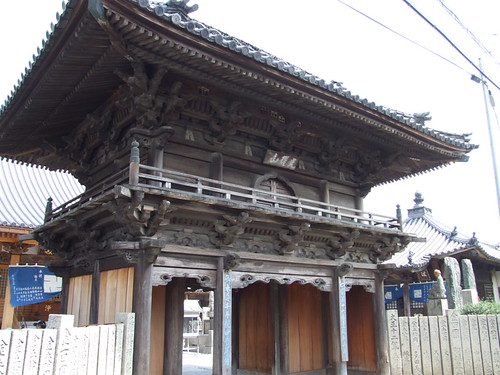 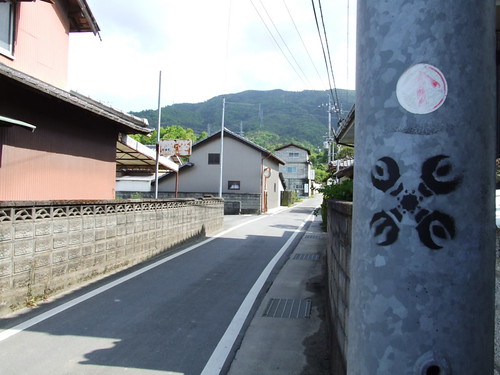 “The majority of esoteric ritual implements derived from Indian weapons. A single-prong vajra has a grip in the middle and a point on either end, and its symbolic function is to conquer the passions. A katsuma is an esoteric religious implement made in the shape of two three-prong vajras placed together in the form of a cross. The katsuma, along with the eight-spoke cakra wheel, were both originally implements of warfare used when the opponent formed a tight mass of people. Because they are perceived as crushing everything below them as they roll, they represent the power to eliminate the passions. These implements themselves, unique to esoteric Buddhism and placed on the altar during religious ceremonies, must have created an aura of mystery for the people of the time.”
The Shape of Mystery: Implements of Esoteric Buddhism
October 30 – December 24, 2001

Temple 17 (Idoji 井戸寺) is also deeply recessed between many rice fields – just remember to go directly to your left when you leave (alongside Hwy 30); you can head south and then east, but I’m not sure about that trail – it does keep you outside the main city and saves you 0.8 km going to Temple 18 (Onzanji 恩山寺), but it also cuts you off from convenience stores during lunch time; take your pick: through Tokushima or along the rural trail. I will say when I passed through the city, I had never been more tempted to reduce the stress and catch a train – both Temples 18 and 19 are reasonably accessible by JR, and Tokushima-eki was a short walk away… so why didn’t I? One reason: I’m stubborn. Second reason: I went on this journey in part for a big change in pace. I’m not going to appreciate this trip if I ride around in a car or on a train – the purpose is lost. Regardless of how much pain I feel, I know the tougher path is the right path. It’s how we live – otherwise, everyone would stay inside, work from home, and sever all human contact.

Instead of dwelling on the pain, I start to take note of the few stone markers. The kanji is helpful. By knowing the number of each temple I pass, I can learn the kanji number on the next stone sign:

I also very quickly discover the meaning behind this island: shi-koku, 四国, four-“country”. Four countries? Not quite, but four prefectures: Ehime, Tokushima, Kochi, Kagawa. Hence the expression “ikkoku mairi”: doing the pilgrimage “one prefecture at a time.”

Since the trip from #17 to #18 is a veritable waste of sight, I’ll tell you about a little social experiment I’ve been attempting. As any foreigner who speaks Japanese knows, a Japanese person will compliment you if you speak a single word:

They seem to want to say this regardless of knowing your Japanese is terrible – just saying “domo” or a simple phrase can elicit such a response.

Therefore, anytime someone speaks to me in English on this trip, I will reply:

A housewife standing at the threshold of the temple, smiling, pointing, and saying “temple!”: Ego ga ojouzo des ne.

My how the tables are turned. It’s just meant to be a joke, but we’ll see…

For the most part, however, the reactions I get from people are completely different. Dressed as a henro, I can be seen as someone:

Take these things into account and the novelty of the foreigner is lost, replaced by the respect for the aruite henro (walking pilgrim). It’s quite refreshing.

Temple 18 (Onzanji 恩山寺) is another tucked away in the mountains. There’s not much else around except a few rice farms, and you can appreciate the solitude once again. Take some time to enjoy the sculptures at #18, and find the walking path to #19 just past the driving entrance. 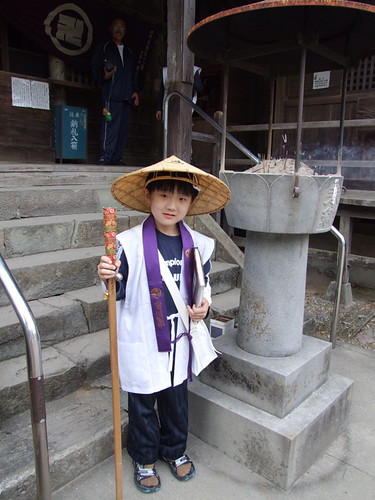 The trail is considerably well-marked here, except for one Miyazaki sign that points you to go behind a shrine – just visit the shrine, but remember that the path remains on the road. The bamboo forests you’re surrounded by are quite the attraction; they’re so tall the sun can barely permeate the leaf enclosure to reach you.

In about 4 km you’ll start seeing the signs for Temple 19 (Tatsueji 立江寺). This one really is quite nice – a fully-stocked henro store, a great temple, inside and out, and lodging is available. Evening services are offered at 5:00 PM, dinner to be served afterward about 6:00 PM. I had a great conversation with two Japanese “bus henro” about Buddhism. I’ll leave you with one last bit of trivia: why do Buddhists leave food and drink around images of Kobo Daishi? It is believed that Kobo Daishi is merely meditating, not dead.