Once again, I have others to thank for the fact I have a mosquito-free place to rest my weary body tonight. The fact that such a place exists is a testament to the goodwill of the people of Shikoku, or maybe just my dumb luck. Even as I write, two Japanese henro are collaborating, comparing the best free places to sleep around Temples 23-88. Kamojima Onsen, Hashimoto’s Bus, and of course, my present savior.

But why dwell on the present, when the past is infinitely more interesting?

I’ve been angry a lot these past two days (though not between Temples 10-12, if you can believe it). This was probably due to my mounting pain and the lack of an outdoorsy atmosphere (with some exceptions). I can also chalk up my attempt at reserving lodging at Temple 19 (Tatsueji 立江寺) to this list. I called in the morning as I was preparing to leave my ryokan near Temple 13. The woman on the other end asked me “ima doko des ka?” (where are you now?) I thought that was a rather unusual question, even though I told them I was a walking henro – if I want to travel to #19 today, that’s my business. She would have none of it, and handed me off to another monk:

In Japanese
“Maybe you should stay at a ryokan near Temple 18.”
“Please just make the reservation.”

Again, what right do they have to decide what I am or am not capable of? I know they’re just trying to be practical, but it was a little bit of a hassle just to book a needed room.

Despite this inconvenience, I still recommend temple lodging at least once. The food, accomodations, and conversations make your experience that much more worthwhile. Let yourself try all the different methods of lodging on the pilgrimage – temples, ryokan & minshuku, free lodging, nojuku (though I wouldn’t recommend it with so many free places available). You’ll find yourself exposed to a greater variety of henro doing the pilgrimage for different reasons – the purists, the tourists, the adventurers, and those seeking a temporary escape.

As you leave #19, take Highway 28 until you hit 22. This is an incredibly narrow and hazardous path, and there’s no access road you can use – be careful. The scenery begins with rice fields, but gradually develops into a mountain view. Once that happens, prepare yourself – this is a long, steep climb, filled with steps and inclines (mostly wooden steps). You rise 470 meters in less than three kilometers. There aren’t too many (and by that, I mean one) places to stop for lunch between Temples 19 and 20 – my best advice would be to give yourself an early lunch at Lawson when you hit Hwy 16, or pack a decent bento before you leave Temple 19.

As I was saying, the Niōmon to Temple 20 (Kakurinji 鶴林寺) is about 200 meters from the main grounds – if you want a picture, that’s going to be your one shot, unless you’re willing to go down and back up.

The grounds are especially small after such a hard climb. If you’re looking for a bigger reward for your eyes, wait until Tairyūji (太竜寺). But, the architecture is unique – in addition to the images of Buddha and Kobo Daishi, there are some nice crane statues. 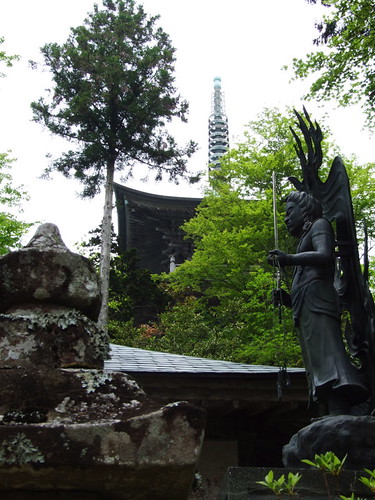 Take your time to rest here, but you’d better have brought your own drinks – there are no vending machines. You’re about to follow it up with a strenuous downward slope the same intensity as your climb. You do go through some astonishingly beautiful places, especially as you cross the bridge: great view of the mountains (by the way, the vending machine there is the last one until #21). Then, right after you’ve gotten used to using your quadriceps, you start right back up again. This climb seems all the more painful because it’s longer and more gradual. I know that sign said it was only 1.7 km, but it felt so much longer. I climbed. I climbed until my legs burned and my muscles pumped battery acid. And then I climbed some more. 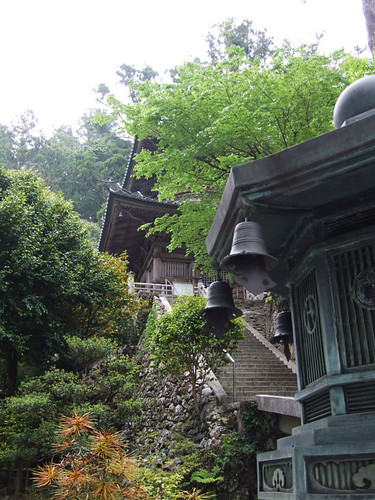 Temple 21 (Tairyūji 太竜寺) is huge, and simply amazing. It’s enough of a tourist attraction to have a ropeway (ロ-プウエ) between the main temple and a outlining surburb. Ironically, this is the most convenient method of access – I might have given off the impression walking was difficult, and even if you drive through the turns and deadends, it’s still a one kilometer walk uphill from the parking lot.

I must have been out of my mind to keep hiking at that point – both sides of my legs were in searing pain (not just sore), and I knew there wasn’t much in the way of lodging offered between Temples 21 and 22. You can take the ropeway into the town, where they have a michi-no-eki (trail station), and a hotel. But this is in violation of the essence of an aruite henro. I trudged ahead… or downward, anyway.

The path downward is all the more difficult because you know what’s coming after walking away from Kakurinji (鶴林寺). It’s even worse – a concrete downgrade for nearly 4 km until reach two minshuku; these might not be bad places to stop for the night.

But, like I said, I’m insane. There’s a henro rest stop when you hit Highway 195 that might be stocked with tea and snacks by the locals. The Miyazaki book shows a michi-no-eki with a place to sleep, but when I asked the woman at the station, she said henro could use the bathroom floor… yeah, I wasn’t that desperate… yet. 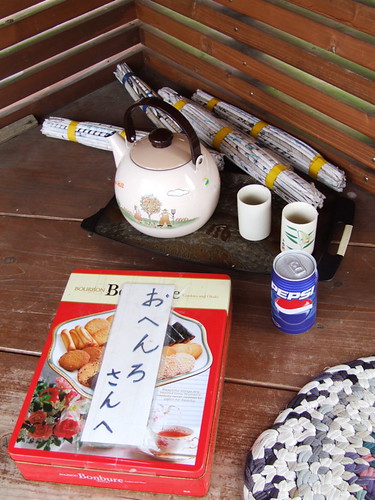 It really is a scenic route the rest of the way to #22 (Byōdōji 平等寺). Although you do have a mountain in your path, it’s a short climb. Before you know it, you’re leaving the wooded area and walking past cow pastures, strawberry gardens, and acres of rice fields.

It’s at this point (6:00 PM), that I realize the severity of my situation – I have no place to sleep, I can’t go any farther (have to get my book stamped at #22), I’m hungry, and it will get cold tonight.

Fortunately for me I’m not just another random foreigner in a strange part of Japan. I am a henro, and with that title carries recognition and respect. A woman next to the temple recommended a good place for nojuku (sleeping outside). An oba-san (grandmother) speakes to me far too fast and friendly, but I manage to extrude some information about a better place. An old man walking his bicycle tells me in perfect English: “I found a free place for henro.”

Three offers of assistance in less than 30 minutes. My desperation doesn’t appear so hopeless after all. I am directed to a portable building, complete with futons, blankets, pillows, tables, running water, and storage. FREE. It might as well have been a miracle. What’s surprising is this place wasn’t mentioned on any map or website that I had read, yet it’s clearly nicer than most places that offer free lodging – the owner is even installing a new full bathroom with shower. The term for a free place to spend the night is zenkonyado. Other places on the henro trail I am at one with the universe, with nature, with this world of green and brown. 20 km left, two temples to visit. I wonder if this trip will change my perspective…