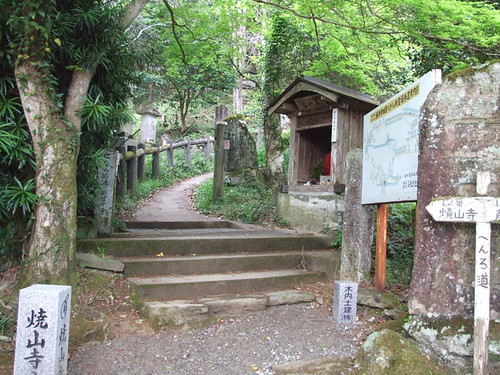 I’m lucky to still be alive as I write this. Although I might be a little crazy, I’m coming to realize this is exactly the kind of life I want: not as a Buddhist pilgrim or backpacker, but as someone who has his adventures by day, and knows how to relax at night. Today certainly qualifies, but I wish there were a little more of the relaxing tonight.

I woke up at 5:00 AM on the hard tatami mat – actually, that’s not quite accurate; I was awake half the night tossing and turning. Even in May, a summer month, it can still get cold at night, especially in the mountains of Shikoku. My fault for not investing in a compact sleeping bag and air matress – my back was fine as it wasn’t hard wood, but I could have used some bedding.

As I mentioned, I highly recommend the tsūyadō (free lodging) at Kamojima mainly because you’ve got access to an onsen after a hard day traveling – the attendants were really nice that night and let us pay once for multiple entries (though it doesn’t open until 10:30 in the morning).

I set out with the intention of getting my blood moving. It wasn’t until I was over a kilometer away that I felt a little less burdened, as though I was truly alone, making this journey without purpose or direction – naturally, my hands were empty, meaning I had left my important kongōtsue at Kamojima. Kobo Daishi was not walking as one with me. A minor setback. Luckily I had time to retrieve it.

The path to the most arduous temple of all, #12, is located to the left of the main temple at Fujiidera (藤井寺). It is said that walking each prefecture of Shikoku is a different part of your spiritual journey: Tokushima-ken is the awakening, simply because you’ll probably be alert after that much pain (my interpretation, anyway). Although you stay on the city road for Temples 1-11, after that, you start to experience some real mountain hiking.

Through the mountain pass, twisting, turning. The purists actually stop at every Buddha statue to pay homage – the entire pilgrimage must take them months. My years of distance training have not been in vain – my calves are well-developed, just itching to be used to their potential; the last time that happened, I was approaching Heartbreak Hill in the Boston Marathon, reading a sign that boasted: “Chuck Norris wouldn’t stop.”

Neither would Kūkai. the wind can do it, we can do it. It takes me about two hours to reach the 6 km mark (the trail is 12.3 km long), and there I discover a well-stocked cabin with tatami mats, futons, pillows, and running water. I don’t think I’d recommend this except as a last resort; you’re completely cut off from food and bathing facilities. Still, if you’re stuck on the mountain, it’s a great place to crash.

8 km in. A stone staircase looms before my eyes, mocking me with its 50 steps – you try it after a 8 km uphill course. Keep moving, keep moving.

There’s a statue of Kobo Daishi at the top of this peak to salute your determination – my salute to the men who hauled the stone blocks up there. 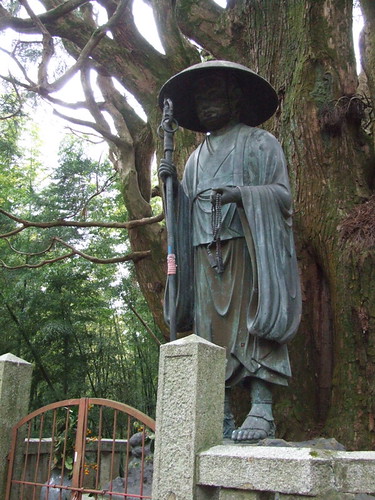 This is where you need to pace yourself – the trail tries to trick you into believing it’s all downhill from here. Nothing could be further from the truth; just as your quadriceps get used to the strain, you begin another testy 1.5 km uphill. Do the math: that’s approximately 8 uphill, 2.5 downhill, another 1.5 uphill.

Gambatte, ohenro-san, and bring a lunch from town – there’s nothing on the mountain between temples 11 and 13 but vending machines (perhaps a noodle shop).

Temple 12 really is worth the wait. About 600 meters from the concrete path, I came across a henro walking the meguri counterclockwise.

Right he was. The road leading to #12 is laden with grey grave markers, each soul a flicker of light burning high on the mountain. I don’t know how, but I was able to keep up with the bike riders who left at the same time that morning – the walker or runner will always overcome the uphill biker.

Temple 12 (Shōzanji 焼山寺) is probably the only place you’ll have to take a rest in quite a while, so take advantage; they have a small restaurant, but it was closed when I was there. The serenity and mountain views are quite nice. It look me about five hours to get there from Temple 11. 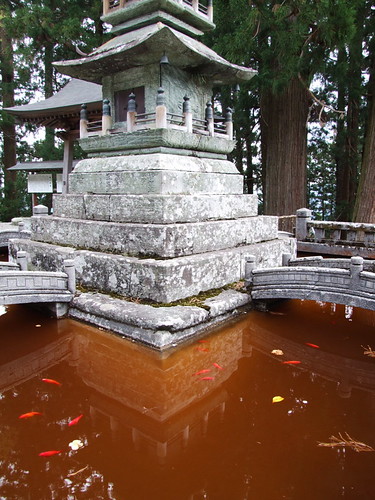 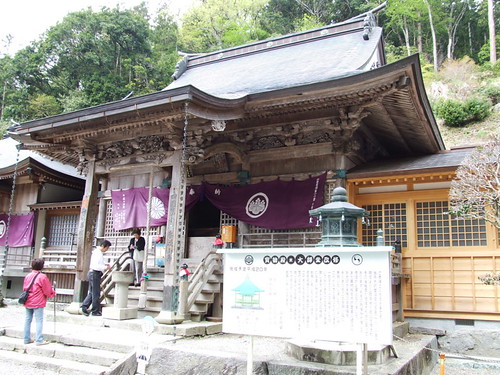 Although there’s no doubt that the walk between 11 and 12, on the south side of Yoshinogawa Valley, is infamous, you should remember that there’s 20 km between you and Temple 13 (Dainichiji 大日寺). It’s impossible for me to describe every turn, every twist, every beautiful sight. I’ll leave you with these words:

“Do not just walk in the footsteps of the men of old, seek what they sought.”
Kōbō Daishi

I know it’s the largest gap between temples you’ve seen thus far, but remember – it doesn’t get more beautiful than this. I can only imagine what it’s like during cherry blossom season. Mountain views for hours, some amazing foliage, scenic bridges… by the way, never let your kongōtsue touch the ground over a bridge.

Any henro traveling in reverse has a long, gradual uphill ahead of them – wish them gambatte. You’ll have one short uphill, but it’s mostly downhill until Temple 13.

Be careful not to get lost here – this is the first time the path forks multiple times; if you take the northern pass (about 5 km longer), you can stay at another nice Michi-no-eki next to an onsen. The Michi-no-eki is just a trailside rest area for vehicles, but they usually have a covered area where you can sleep in an emergency. The one between Temples 12 and 13 is about 10 km from Temple 12 on the northern route; you might as well tough out the extra 10 km and head to a ryokan near Temple 13.

The southern path forks again once you reach the Tokushima city outskirts – just stay on Highway 21 and you’ll see Temple 13 on your left. They don’t offer housing, but there are a few ryokan nearby. It’s not a bad time to try sudomari (simple lodging, no meals), if you want to save some cash by picking up a bento from the Sunkus 500 meters earlier. 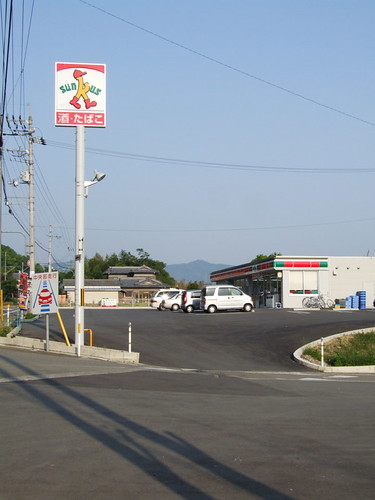 I really don’t recommend doing 12 and 13 in one day (over 30 km, with mountains), but I didn’t see too many places to stop between the two. Temple 12 doesn’t offer housing either, as far as I know, so you’d have to settle with camping out or trudging to #13.

I’m exhausted, and my legs seem to have been replaced with lead. I’m sitting in a ryokan ten feet from Dainichiji (大日寺) and will sleep in a little tomorrow. Remember: