I awake warm and rested, yet find myself covered in mosquito bites – might be a good idea to bring some netting the next time I choose free lodging. My companions are quick to rise and set out to Temple 23 (Yakuōji 薬王寺) – the LAST in Tokushima-ken.

I, on the other hand, have time to relax and mill about; Temple 22 (Byōdōji 平等寺) doesn’t open until 7:00 AM and I’d like to get my nōkyōchō (納経帳) stamped before I leave the area.

Not a creature stirring, not an engine roaring, not even the sound of giggling children headed for the train station… this is a sleepy little town.

Later, the stamp successfully added to my collection and a few more pictures on my flashdisk, I set out to #23.

The hike out really made me realize – this journey is not all beautiful mountains, sleepy little towns, or communing with nature. It’s the open road, and much of your time is spent on a hard, unforgiving highway. Each have their appeal, I suppose.

This journey was never about visiting the temples, it’s about the paths we take, the people we meet, the thoughts in our mind. The temples are just convenient focal points.

Yet, after I left the green areas and turned directly onto Highway 55, I realized this was the most boring point in my travels – it was comparable to my experience walking to Irori Sanzoku

There’s nothing on this road for you. A few rest stops, the occasional vending machine… you’ll be begging for the time to come when you can see your goal. Four or five tunnels and the occasional head nod to fellow pilgrims later, the buildings become denser, the trees fewer, and the people more plentiful.

Congratulations; your goal is in sight. But you will have to work for it. I had walked for five and a half days, averaging about 26 km/day over some pretty mountainous country. My legs were beyond sore, but not so much to the point that they were numb to all everlasting pain – I could feel everything.

My shoulders were bruised in two unusual arch-shape patterns where my backpack companion had chosen to reside for the length of the pilgrimage. My arms were filthy and covered in bug bites, my hair a jumbled mass underneath the veneer of the sugegasa

One foot in front of the other, slowly but slowly. The soles of my feet can’t take the pounding anymore – I have to walk like an old man, steadying myself with my kongotsue just to reduce the impact force. What a sight I must have been to passersby: a foreigner henro, unshaven, limping along the side of a highway in the countryside of Japan.

Farther and farther. I stop for lunch at another Lawson’s. I haven’t seen any trail markers for six kilometers now, but my gut tells me I must be close. Another gaikokujin and his Japanese girlfriend bid me hello.

Five minutes is all it takes. I’m still stumbling, but I find some mysterious force fills my legs with one last bit of strength, one final chance to reach the 23rd temple under my own power.

My soul is soaring over my head, my arms beyond sensation; the suffering in my lower body keeps me grounded to this reality as I cross one final bridge, one last niomon…

The end of my journey 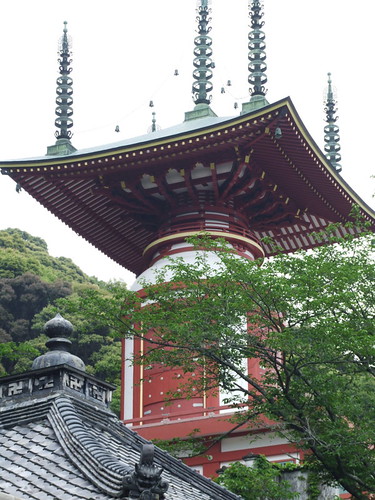 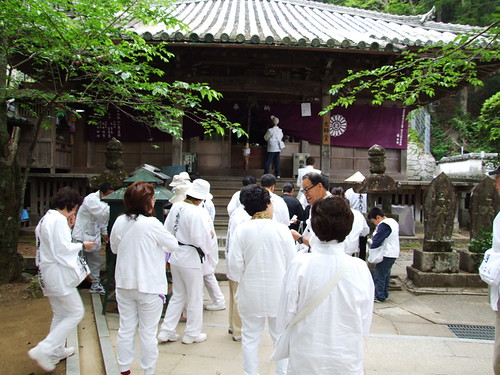 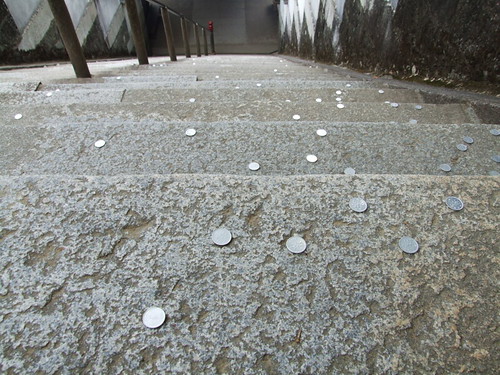 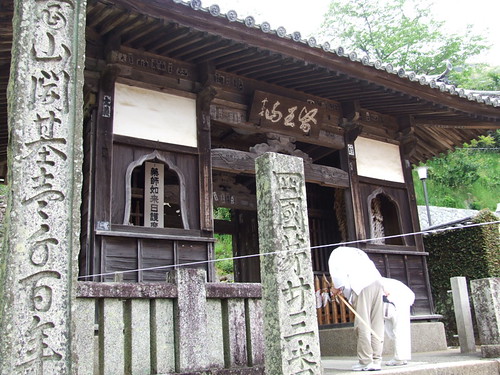 If I had one regret from this last day, it’s that I didn’t spend enough time in the sleepy little town of Hiwasa, where Yakuōji (薬王寺) resides.

A thin layer of mist was covering the area that morning, leading me to believe I could very well have been walking through the gates of Valhalla itself. Unfortunately, enlightenment (satori) is rarely as simple as a chance encounter of the right weather.

Temple 23 (Yakuōji 薬王寺) is a testiment to the area in which it resides. the red pagoda stands out above the trees for all of Hiwasa to see, almost as prominent as the castle on the opposite mountain.

The grounds are guaranteed to be full of henro as this temple is the last in the Tokushima-ken, in a port city, and 50 km from Temple 24 (Hotsumisakiji 最御崎寺) in Kochi-ken. Remember, if you choose to do the pilgrimage in stages you must always start from the last temple you visited; that’s why traditional pilgrims finish the meguri not with #88 (Ōkuboji 大窪寺), but by completing the circle and returning to Ryōzenji( 霊山寺). Along this path you can see the henro trail through both fresh and experienced eyes; just like the circular trail you follow, so to should your understanding of yourself be complete. Some henro go back to Koyasan as well.

I’m setting my candle in the rōsokutate at the hondō when I catch a most curious sight – another foreigner aruite henro. Naturally we both stand out among the masses. She was restricted to walking during Golden Week as well, but had visited more of the Bangai temples than I had. 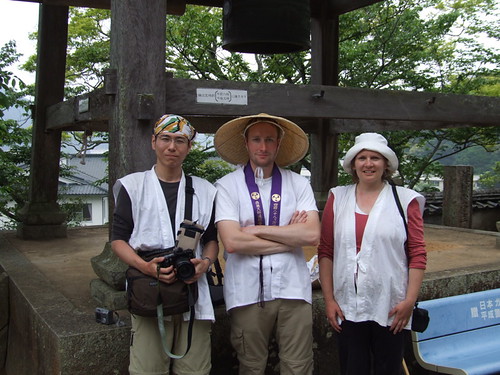 Unfortunately there wasn’t time to recount out adventures as she was heading to the last Bangai temple in Tokushima prefecture and I was catching a train back to Hiroshima.

If nothing else, the michi-no-eki a few blocks away from Temple 23 is quite the attraction – shopping areas, yakitori booths, gift shops, a foot onsen… there was even a clown entertaining children when I stopped by. 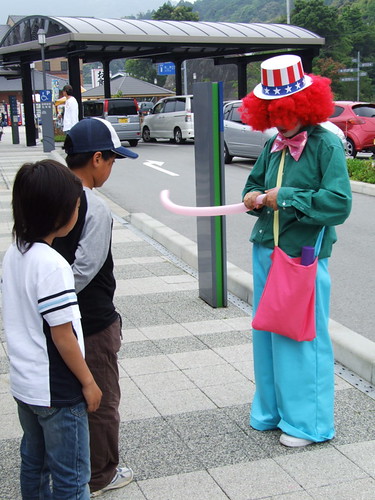 If you’re looking for the best in relaxation, however, there is a full onsen right across the street.

Getting Back
The trains in south Shikoku aren’t exactly among the fastest JR designed – locals might run only once an hour or two, limited expresses less often than that.

It took me almost two hours to get to Tokushima Station from Hiwasa (though I had just missed the tokkyu by a few minutes).

From there, you can fly, swim, or ride the rails home.

In the middle of the journey of my life, I found myself astray in a dark wood, where the straight road had been lost…

Dante’s misadventures took him straight into the gates of Hell. Your road is forever astray, your spirit always wandering, as it is intended to be for the henro.

You set your own destination, keep your own pace, travel in the manner you choose. No one can tell you otherwise – I personally don’t believe the journey will be as fulfilling for you if you travel by car, bus, or helicopter (yes, they do charter those), but it isn’t my approval you should be seeking, or anyone else’s for that matter.

Test your limits. Talk with other henro. Travel with Kobo Daishi. And, as always, let your life influence the world around you.

The most useful websites I found for the 88 temple pilgrimage

Pictures from my pilgrimage