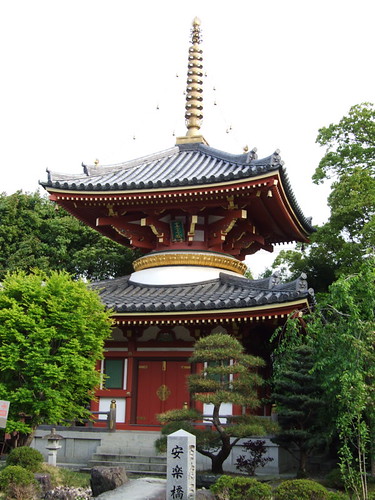 After a 9:00 turn-in the night before, I awake to the pleasant sound of drizzling on the temple… wait, back up a second… drizzling is bad. This is not some laidback morning when I’m free to sleep in and browse the internet after a long breakfast.

This is the life of a henro traveler, and the rain can be disasterous if you want to cover a lot of ground – especially since I, arrogant as I am about the nature of weather, did not pack a poncho or rain pants. This a very bad idea. I got lucky today, but who knows what typhoons the future will bring… it boggles the mind.

The breakfast in Temple 6 begins at 6:30. It consists of a hard boiled egg, miso soup, rice, tofu, and a banana. I’m used to a much lighter fare, and even knowing I will burn a lot of calories, I can’t polish it off. Too bad, because it’s quite delicious.

No time for a shower (the baths aren’t usually open in the morning, anyway) as I see the rain has momentarily stopped and that’s my cue to begin the trek to Temple 7 (Jūrakuji 十楽寺). My compliments to the monks of this temple – they handled my terrible Japanese ability with grace and treated me with dignity.

One thing I will say… I felt really bad about not being able to take advantage of the varieties of conversations I had heard – my Japanese level is sufficient to talk about my experiences, where I’m from, and my likes and dislikes, but that’s not enough to explain or listen to the philosophies behind the pilgrimage. More guilt to pile on as I study the Nihongo.

At 7:30 I’m already out the door, bidding farewell and “arigatou gozaimashta” to my fellow henro. Grey skies, but no rain as of yet. That hits about 1 km later, before I’m even in sight of Temple 7. Lucky for me I had two things going for me – a waterproof pack cover, and a sugegasa that functioned nearly as well as an umbrella (though I wouldn’t suggest relying on it for heavy rain).

It was these two things that kept me walking until Temple 8 (Kumataniji 熊谷寺), and the rain prevented me from getting any pictures. Fortunately it was nothing more than a cloud burst, and I was able to coast past Temple 9 (Hōrinji 法輪寺) and up to Temple 10 (Kirihataji 切幡寺) without getting soaked.

Kirihataji (切幡寺) is just fantastic, no matter what your experience. A mountain entrance Niōmon, and 99 steps later, you find yourself at the chōzubachi, with 234 steps to go until the Hondō temple.

How do I know this? No didn’t count them, but I had another chance encounter that would give me quite the insight into this temple.

Aruki-san, as he liked to be called, had a pleasant demeanor one would expect from an elderly grandfather, though I later found out he was my father’s age. His face was tanned and weathered from a lifetime of labor, but he was clearly enjoying his retirement – apparently he visits Kirihataji almost every day. It was he who approached me near the ablution basin.

“Do you know why this temple is called Kirihata?”

He tried Japanese first, but it was a little beyond me. Without missing a beat, he asked me for some paper and proceeded to write in near-perfect English:

The reason why this temple is called Kirihata 切幡. There was a girl around here about one thousand and two hundred years ago.

One cold night, a poor old man visited her shabby house, and asked for a piece of cloth to warm himself.

She was making some beautiful cloth for living but she cut off the cloth without any hesitation and gave it to him.

He stayed with her for several days, and the last day he told her that he was a incarnation of KOBODAISHI.

She want to be a Bosatu (learning to be a student in Buddhism).

The old man changed her into a golden Bosatu!

This temple has a big statue called Kirahata Kanon in the yard and two small Kanons on its roof.

Side note: the correct terms are “Kannon”, “Bosatsu”, and of course, reincarnation

But he didn’t stop there, not before proper introductions were made and he asked me some standard pilgrimage questions:

– Where are you staying tonight?
– What temple did you come from?
– Why are you a henro?

Naturally, I gave him one of my prayer cards (Ofuda), and he guided me up the 234 steps to show me the statue of Kirihata – it was rather impressive, especially now knowing the significance of the cloth and scissors in her hands. 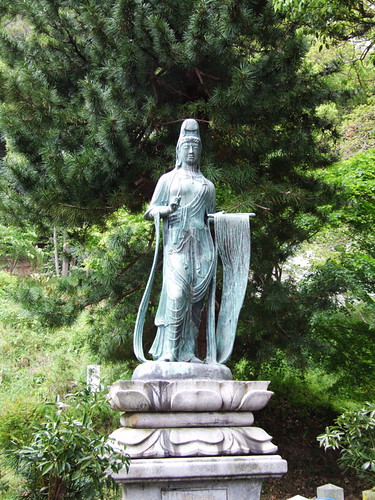 We even met up with a woman I had met while waiting for the rain to give out in the Temple 8 henro shop. She spoke decent English, and was amused by Aruki-san; I can’t be sure, but I think she asked him if he had been drinking…

In any case, Aruki-san not only showed me a side of Kirihataji Temple few people see, he presented me with my first osettai

osettai are gifts given to henro that should never be refused. The giver feels they are participating in the pilgrimage in some way, and you should pray for them – always offer one of your prayer cards after receiving any osettai. They might refuse, but make the offer.

But going back: Aruki-san phoned ahead to his wife, who called her friend, who was happy to host me at her house for lunch. A rather generous offer, considering she knew me through third-hand contact.

I felt a little guilty about riding in a car, even for a few kilometers – the nature of a true henro is to remain on foot (of course, I wasn’t supporting a bell or wearing all white). Nevertheless, it was worth it; my first experience being a guest in a Japanese house – even a lunch guest – and the homemade food was delicious. I reasoned there was something desperately wrong with my cooking if food was capable of tasting this good. Rice with beef curry, green beans, and fried vegetables – onions, eggplant, renkon (lotus root).

She made enough fried food to feed five people – I declined as respectfully as I could after eating two servings. I may have needed the protein, but my stomach has its limits.

Meanwhile, Aruki-san continued to fill my brain with fact after fact: information about the pilgrimage, Japanese levels of conversation (standard, polite, formal, etc). I’m glad my being there didn’t make them feel awkward. Occasionally, they’d leave me out of the conversation by switching to standard Japanese, but Aruki-san would always follow with “wakaruka?” (Do you understand?) More often than not, I didn’t, so he was kind enough to switch to English.

He even gave me a map, which, unlike the Miyazaki book, showed the location of the free lodging I had read about between Temples 10 and 11 – two tatami cabins attached to Kamojima Onsen. He warned me it would be “shabby”, but I told him not to worry. After a long series of bows and thank yous (I hope I was polite enough), I was dropped off just past the bridge between Temples 10 and 11. It was so windy my sugegasa nearly flew into the river a few times, but my will of iron beat that hat’s ambition into submission; maybe I just tightened the knot. 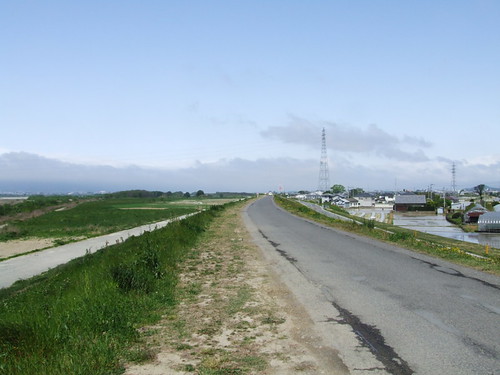 I’ll never forget the expression on Aruki-san’s face as he cheerfully smiled goodbye and drove off waving. I’m still a stranger in a strange land, but somehow I find myself amongst friends wherever I go. How ironic I had to cross the globe to realize that.

Temple 11 (Fujiidera 藤井寺) is tucked back in the country just on the cusp of the mountain trail that leads to Temple 12 (Shōzanji 焼山寺). There should be your standard fruit vendor waiting at the threshold. 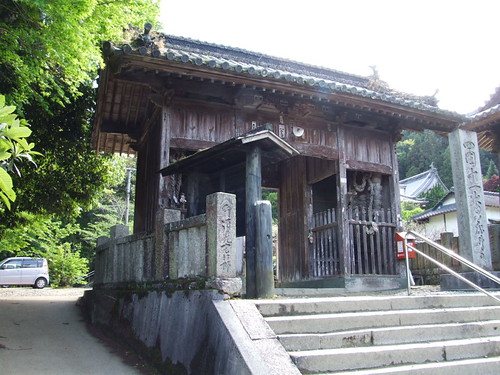 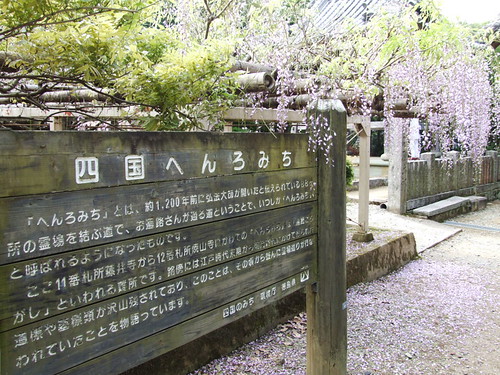 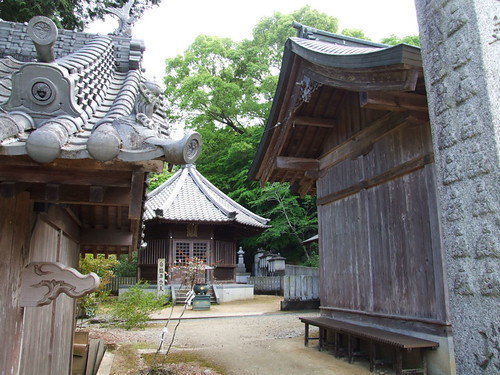 I’m not sure if they have housing at this one, but there is a beautiful garden just past the entrance. It’s a quiet temple like this one that makes you appreciate your journey. Though if it’s noise you’re looking for, don’t hesitiate to hit the shōrō on your way in. 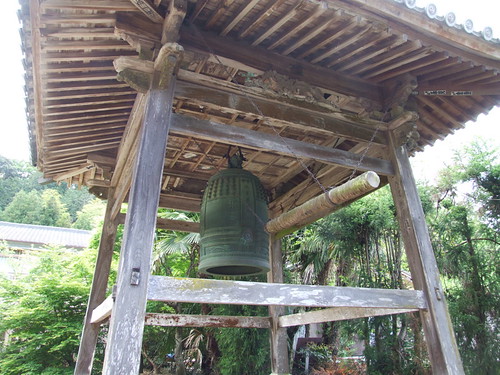 I had to backtrack a few kilometers to get to Kamojima Onsen – just sign in at the front desk and they’ll show you around the cabin. For me, housing like this is no problem. I wish I had had a futon, but the main issue when camping out is bathing. And guess what? There’s a great onsen next door with full facilities and a rotemburo (outdoor bath). 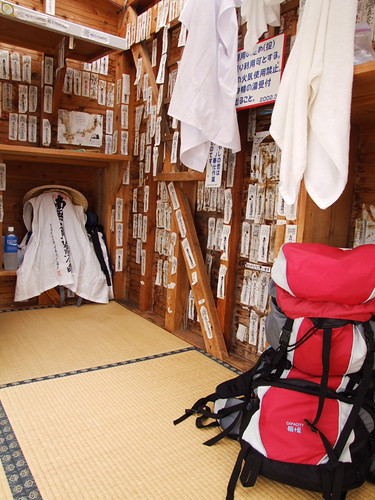 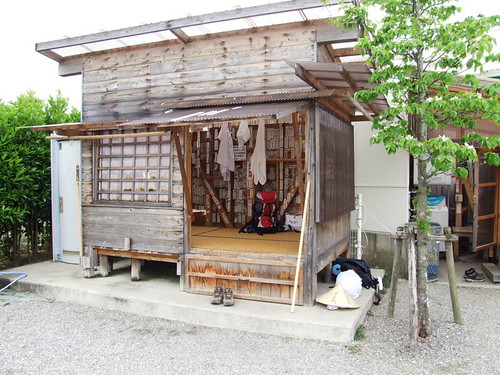 The cabins have electricity, laundry facilities (with a dryer), and free bicycles you can use to ride to the convenience stores – the town’s main drag is only about a kilometer away.

They also give you the chance to chat with your fellow henro. Daisuke-san, who happened to be from Shikoku, was curious as to how I learned about the pilgrimage. He seemed very surprised to learn that there were English books about the trip, but I was more so to discover another one of our bunkmates first saw the pilgrimage featured in a horror movie when he was 15 – I’d really like a copy of the DVD. I also confirmed my suspicions as to why many people were not surprised to see a foreign pilgrim on the road – henro are really seen as a major tourist attraction in Tokushima-ken.

I did have one slight inconvenience, however. Upon settling down my bag and preparing to take a soak, an older man drove up surreptitiously and stayed for a few hours. This area isn’t exactly some idle resting place – we’re at an onsen in the outskirts of town in the middle of nowhere. People don’t just stop for a smoke. Yet this man would not take a hint, proceeded to interrogate every one of the henro staying in the cabin that night, regardless of how tired he knew we must be. When I pulled out my camera, he told me “abunai” and warned me about dangerous homeless people in the area who might steal it from me… it took a lot of self-control not to laugh at that, or point out the flaws. I held my tongue for the duration of his stay, but every time I tried to talk in private with other henro, he heard us and walked right into our conversation uninvited. Reminded me a lot of this story – I wonder if it was the same guy.

About to settle in for the night, so I will arise with my back considerably sorer from the tatami mats. I complain, but this is what I live for. Otsu kare… the mountain trek begins tomorrow.