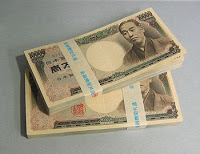 …with minimal Japanese skills. The language barrier was not so much an issue for me, as I understood the key words involved in opening a new account, and was familiar with the general procedure – this is key.

Japanese banks don’t charge anything for you to open a regular account. I doubt that’s the case with issuing credit cards or other less-common transactions, but if you’re just looking for a place to store your millions of yen, consider it done.

Anytime you want to have your Japanese skills called into question, be sure to visit a bank – they speak quickly and in a language almost dissimilar from Japanese. On top of that, it’s a bureaucratic organization, with multiple forms, checklists, and immutable procedures.

That having been said, I had no problems. Maybe I was lucky.

Step one: walk into the bank. Take a number card from the machine (chances are all banks have these). Depending on the bank and branch, they may have a different button for you to push for a different number card: loans, new accounts, general transactions, etc. Be sure you get this right the first time, because if you approach the wrong window, you won’t be able to just sidle over to the next one in the event of a mistake… you have to start all over again.

Before you approach the teller window, however, be sure you pick up the correct form. This is the greatest difficulty for both foreigners and Japanese – finding the proper paperwork. Fortunately I had someone point out the correct carbon copy paper to me ahead of time. Nevertheless, you should ask for help on this one, as there could be as many as thirty forms for a variety of tasks.

Next, approach the window (shinki, 新規), present the number, and state “futsuu yokin o onegaishimas.” Futsuu yokin (普通預金) is a standard account. Although some banks may be willing to write the kanji for you on the papers, I’m willing to bet most tellers will not, as it is technically against the rules; you’ll need to be able to write your name in katakana, to scribble your address in kanji (and be sure it matches the address on your gaijin card – if you’re new to the area, it’s safer to wait until you get the actual card rather than just a certificate, as some banks will reject this), and to post your inkan stamp

Signature or inkan? An inkan, or hanko, is your name seal, which I’m sure by now you’ve noticed is much more common in Japan. Banks can go either way on this if you’re a foreigner; if you have a Japanese person with you explaining the situation, it might go down better. Nevertheless, if you have time beforehand, have a custom stamp made at a hanko store (you can usually find them in large shopping areas). Following that, register the stamp at the local government office for ¥200 – they give you a card which can be used to obtain an official certificate stating your stamp is legal (known now as a jitsuin). I personally believe you, as a foreigner in Japan, should get the stamp made with katakana characters. There are virtues to kanji and romaji, which I have discussed before

As I was saying, banks will have no objection to you using an inkan, but some banks (or just particular branches or tellers of the same bank) might have a problem with you using your signature – it’s fairly common for foreigners, but some banks still object. The system is so random here… the same bank might reject your signature at the central branch, but accept it in the western location… get your jitsuin just to be safe.

Assuming that controversy doesn’t occur, you will be asked to present your gaijin card (Gaikokujin touroku shoumeisho) to be copied, and asked if you want a cash card as well (no charge). If you do request a cash card, they will explain it will be mailed to the address on your gaijin card in a few days. You will also be asked to write down your pin number on a carbon copy next to your name stamp or signature.

Step #478539: initial deposit. Present any amount of cash you would like to deposit in your account (they need to have something to keep it open), and write down that amount on the appropriate form.

You’re finished. Just wait. They will call you back up the window once your bank book (tsuuchou, 通帳) has been created or if they have any other questions. I should mention there was a little bit of discussion regarding the order of my name; hardly the first time this has happened.

In Japan, surnames (or last names by western standards) usually come first, followed by given names. Thus “Masahiro Yamamoto”, as he is known by his British colleagues, writes his name “Yamamoto Masahiro” in kanji. As far as I know, there are no middle names in Japan, or they are much less common.

So what to do when you encounter an American was has not only a middle name according to his government-issued ID, but a different style of ordering his name? How to enter that into the banking computer…? I think they listed my first and middle names together on this occasion, which shouldn’t be a big deal, but I was careful to point out that my last name was in fact my myooji, or surname.

That’s all the information I have about that. I would like to put together a help letter for foreigners who don’t know the appropriate kanji for opening a bank account (kind of a “point-and-help” sheet), but the procedures may be different in different banks. I don’t know; if you have any questions, email me.

Bank accounts are 100% essential if you’re living in Japan; signing up for a gym, getting your monthly salary, paying your bills, wiring money home, or signing up for a running race (assuming they don’t have a post office form). Choose wisely.