The sun is shining and the grass is green, if it weren’t the rainy season, I mean… 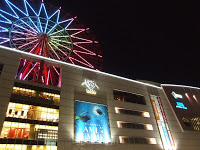 I can honestly say I don’t think I ever imagined I’d see a Ferris wheel built into a train station. Ah, the wonders Kagoshima City has to offer…

Five years ago, none of this was here. Kagoshima Chuo Station did not exist (only its predecessor, the small wayside Nishi Kagoshima Station, 西鹿児島駅). The shinkansen line stopped at Hakata Station in Fukuoka, and the traveler was given a choice between bus and limited express trains to Kyushu’s largest southern city.

The station is pretty much the epicenter for all travel in southern Kyushu and practically the focal point of Kagoshima City (although, I have to admit, Tenmonkan, the shopping and nightlife district, still holds that title). Long distance buses stop in front of the station. Underground tunnels weave beneath the tram lines. A huge brand new shopping center, AMU Plaza, is now connected to Chuo Eki, boasting:

If you’re looking for a quick bite to eat and don’t want to search the 5th floor for too long, you might want to consider Pirouette. For lunch, 1200円 will get you meat, a salad, soup, pasta, and bread. At dinner, 1500円 will do the same, and dessert and a drink are included. This is high quality food; I really like the effort they make with the presentation.

There’s also an excellent all-you-can-eat buffet directly across from Pirouette. 1800円 for lunch, 2200円 for dinner. Fresh sashimi, organic juice drinks, vegetables, pasta, fruits, tempura, fried chicken, varieties of rice… there isn’t a lot of heavy meat, but other than that, this is an excellent restaurant.

For dessert? Mrs. Elizabeth Muffin in the basement of AMU Plaza serves fresh chocolate chip cookies in addition to other baked goods.

Want something from home? There are two import stores in AMU – a deli on the 2nd floor as you cross between AMU and Chuo Eki, and a coffee shop in the basement.

You can easily spot Seika standing outside the station; look closely enough and you might even catch a glimpse of someone doing the backstroke. Seika gym is as modern and equipped a gym you can expect to find in Japan: full weight room, exercise mats, treadmills, swimming pool, fitness classes, locker room w/ baths, relaxation area. They don’t have too many free weights for arm or chest exercises, but other than that, this is clearly the best place to work out in Kagoshima. About ¥10,000/month membership.

Kagoshima has a rather efficient tram (shiden, 市電) system, the likes of which I have seen in Hiroshima. ¥150 will take you anywhere on the line.

Recently, the city was given multi-million dollar funding for the express purpose of covering the tracks with grass. I must say it is a welcome beautification to the city, and probably slightly cuts down on the urban heat.

Other than mentioning that Kagoshima is your best bet for any kind of nightlife in southern Kyushu, your trusty Lonely Planet doesn’t really offer too many helpful suggestions on the best places to go. If you have the choice between Kagoshima and Fukuoka, choose Fukuoka. But, there are always options.

The nightlife area of Kagoshima is located directly across from Tenmonkan, about a twenty minute walk or an eight minute tram ride from Kagoshima Chuo Station.

Walking around there for the first time, I was entirely convinced the area consisted of nothing but bunny and snack clubs (overprice hostess bars) – you could even see the women coming fresh from shopping in Tenmonkan to return to their night jobs. Upon further inspection, however, I did manage to locate a few places:

Big Ben is, naturally, a British style pub situated under Tenmonkan. It’s a little difficult to find, as the entrance is located down a small alleyway. If you’re walking west out of the covered area of Tenmonkan, it’s immediately to your left down the first small alley.

I had assumed AI was a hostess club at first, since it bore the byline “Amusement Club”, but it turned out to be a decent place with a dance floor, bar, darts, billiard table, seating area, etc.

Kagoshima is host to a number of places offering excellent Satsuma Ryori, but if you desire a taste of something from back home, try:

Me Gusto
A Mexican restaurant down a side alley of Tenmonkan. The food has more grease than flavor, but it’s closest I’ve had to a decent Mexican dinner since I came to Japan. Despite the food, the ambiance is dead-on.

Across from Big Ben there is a steakhouse offering western-sized cuts for about ¥2300.

Iso is the only beach in Kagoshima City. It’s not bad if you’re searching for a place to go windsurfing or boating in Kinko Bay, but a little too small and close to the road to really relax. The sand is white and black from the volcanic rocks under the water. Watch out for jellyfish. If you’re looking for better beaches, take a ferry to one of the islands.