Often called Satsuma Fuji, or the Mt. Fuji of the Satsuma region, Kaimondake (開聞岳) is the largest peak in southern Kyushu, and as such, gives you great views of Kinko Bay, Tanegashima (種子島), Yakushima (屋久島), and the deep blue sea.

The ascent will take you about two hours with a steady pace, between 2-3 hours if you like to stop and rest. Be sure to stock up on everything you need – there’s not a hint of water on the mountain, and in this summer humidity, you’ll dehydrate quickly.

Most of the trek is just soft earth with the occasional wooden stairway, but closer to the top, you’ll need to start using your hands to trespass rock faces.

Unfortunately, once you do reach the peak, the ocean view is somewhat obscured by the cone of the mountaintop. However, it is a great place to catch a cool breeze and watch the clouds rolling by. 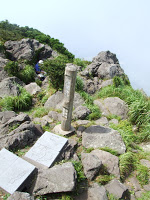 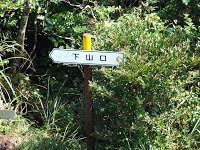 If you’re looking for something unique en route, there is a land-skiing slope directly at the mouth of the mountain trail.

A better idea would be to stay in the Yamagawa or Kaimon area overnight, and catch a bus or walk first thing in the morning; Kaimondake is famous for catching clouds, and an early morning ascent might be your only shot at a clear view of Tanegashima and Yakushima. In addition, Yamagawa has some great onsen ryokan for your pre- or post-climb lodging.

There are trains headed back to Kagoshima Chuo Eki at 3:20, 7:04, and 8:36 PM if you’re heading back in the afternoon. However, if you finish up around 4:00 PM, there are two buses in Kaimon (at 4:23 and 4:41) that will deposit you at the foot of Ibusuki Station for about ￥600. Just go to the only convenience store along the country highway and the bus stop is a one-minute walk. From Ibusuki, you can catch an express or local train (one leaves at 5:41).