There’s a set of stone steps by the river where many of the locals in Nejime (根占) go.

The children ride their bikes through the adjacent park, then quickly cast them down in favor of eating a favorite snack and looking at the sun set over Kaimondake (開聞岳).

The men use the attached port to launch their small fishing boats, or, if they have none, quietly stand over the closeness of the water and cast towards the jumping sakana

What goes through their minds? Although they seem to be idly engaging in everyday tasks, the children and adults share the same affinity for this location. The river. The boat. The need to travel, escape, let their imagination conjure what could be if this river swept them out of this small town in rural Kyushu as easily as one girl brushes a mosquito off the face of her friend. Escape for the mind, escape for the soul. They have happy lives, no doubt, but my presence seems to remind them yet again there’s more out there, beyond that river, past those mountains.

And that’s why I can’t share this feeling with them. This river has already carried me away, from America, to Hiroshima, to Kagoshima, to all over Japan. It is my escape in reality, has been my escape. For the boy who takes one last hard look at my foreign features, it exists only as a dream.

I don’t remember as much as I thought I did about my trip across the Shimanami Kaido; the skies were blue, the wind light, and my impressions of Japan were still rather primitive, even though I took advantage of many sightseeing opportunities.

I’m glad I chanced the rain and explored more of southern Kyushu. 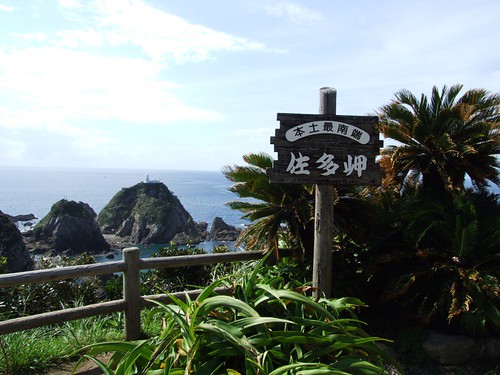 The wind is playing me a song from atop the observation post at Cape Sata (佐多岬). At first I think it must be a wandering homeless musician perched by the absolution basin of the nearby Buddhist temple: the pitch and tone are so irregular, seemingly impossible by nature. Then my eyes slowly turn to the west, towards Kaimondake. There are two small rocky islands with a narrow crevasse bridging them, allowing the breeze to flow through the space much like a wind instrument. But it’s still impossible…

The answer is one of both man and nature. The metal pipes propping up the chain link barrier preventing kids from acting like Superman have two small holes cut into them, a manufacturing detail unnecessary for their present job.

The wind picks up, and the song begins anew. I’m reminded of the way willows’ music hastens to one’s ears across the surface of a pond. A study in contrast. Here I am, hundreds of kilometers from any major city at the southernmost tip in mainland Japan, and yet I am still on a bus route, a tourist destination, a civilized area of the country. Although I see the majesty of the ocean and the distant islands of Ioujima (硫黄島) and Takeshima (竹島), it is nothing other than scrap metal that provides the background music for this adventure. Beauty comes in many forms. 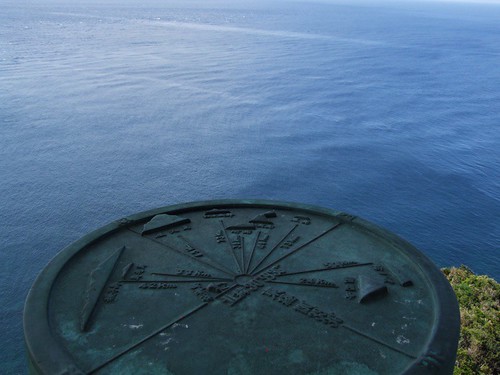 I often have these quiet moments in ferry waiting rooms to stop and reflect on journey’s end.

Sata Misaki was touristy – no better word for it. Even over 100 km and a bay separating it from a large city (Kagoshima), it still manages to be a notable stop for tour buses, caravanning families, and cyclists.

Incidentally, I must have been insane to cycle this far south. It’s within my abilities, but I have a feeling even Lance Armstrong would need to stop and walk the bike every so often.

Going down to Sata from Sakurajima (桜島) is nothing less than paradise at every angle. The smoke plume from the shadowing volcano. The outline of Satsuma Fuji becoming more clearly defined across Kinko Bay. The palm trees along the coast. The volcanic rocky shores slowly transitioning to tropical sandy beaches of blue water. The sounds of the few wild monkeys (Macaques) wandering through the wilderness surrounding the coastal road (if you’re lucky, you’ll come across a few).

The cape itself means absolutely nothing to me, a short footnote in the adventure novel. It’s beautiful, and it’s worth seeing, but don’t let it become your goal. Your goal lies all around the area. Watching the high school boys taking time from their Sunday holiday to practice for this year’s Dragon Boat Race. Catching a little girl in a pink-spotted dress tug on the jeans of her exhausted mother, squealing with delight. The fishermen driving 20 km down the road to find a vantage point that is theirs alone. And perhaps most peculiar, noticing several middle-aged women playing a strange variation of catch to the theme of Phantom of the Opera. If the pain in my quadriceps had died down a little, I might have joined them… maybe. 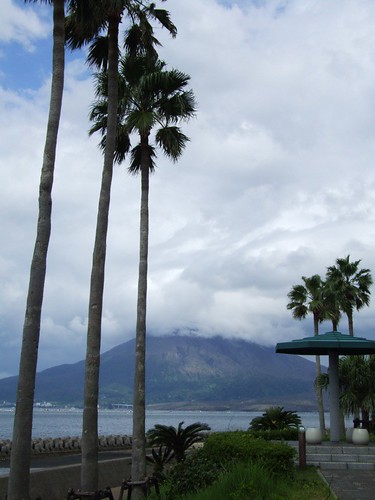 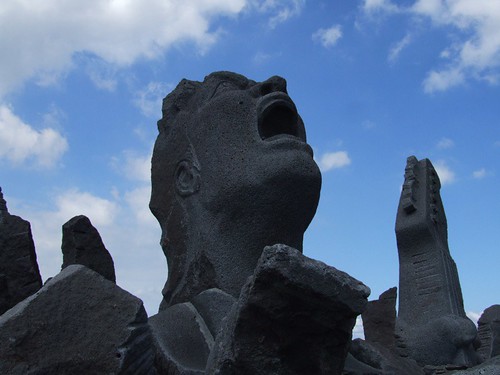 Tonight, for the first time, I felt completely comfortable stepping into a neighborhood izakaya (居酒屋) that had little in the way of wax models or pictures, discussing different types of sashimi with the sole waitress, and dining on boiled snails as an appetizer. Life is funny. Snails. Raw fish. Cold pasta garnished with seaweed. I took it all in, my cells crying out for any nourishment I could provide. Well done mouth, attached to the head that has successfully groped its way through an all-Japanese eating environment. And it was delicious, without even thinking about it. I could even discuss vacation plans with the aging couple from Osaka sitting to my left, perfectly natural and casual.

Thus I adapt, as people are meant to in a foreign environment with enough time. If only I could develop a taste for mayonnaise… but there are some cultural gaps I prefer to leave intact.

Again, back to this work hard/play hard mentality. But working hard doesn’t mean (for me, at least) sitting in an office for 9, 12, 16 hours a day staring at a computer screen, checking facts and writing emails; that may sustain your bank account and what you consider “essentials”, but it leaves a little to be desired in other areas.

I’m no exception, just as bad as any cubicle worker at Apple, supporting my income to buy things for my apartment that I’ll never really need. No one should reach that level of comfort in his life; we’d all be happier, if not stable, on the lamb, living day-by-day, truly working hard and playing hard: in a Japanese hot springs (say after a long day of cycling), partying with friends in NYC, base jumping off the CN Tower… what I need to believe, what we all need to believe, is that it is possible, very possible, to live day-by-day rather than weekend-by-weekend. No regrets. No wasted time. No TPS reports. No looking back. Live for the moment. 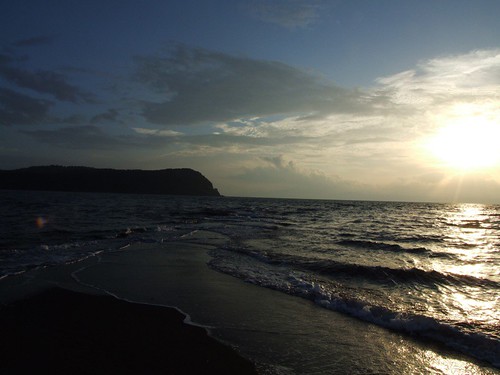 Ferries from Osumi to Satsuma