I had forgotten what it was like to be able to see a satellite pass across the blackness, to see stars as they were intended to be seen – white penetrating flickers of light, the only disturbances in a sea of darkness.

I don’t even have to try to find an observation point – even the light from the neighboring street lamp isn’t enough to compensate for the overwhelming nothingness: no city lights, no car noises, no footsteps, no cats or dogs meowing and barking. Just the gentle hum of locusts and the sky laid out before me, as if I could pick a star out of it as easily as a piece of fresh fruit from a tree.

These are the things I see on Ioujima (硫黄島). The things on which so many travelers miss out. And why? This isn’t Tokyo. We’re far from Vegas. Even adventurers might prefer someplace larger. But these places exist, and while they do, everyone should explore them.

I find myself walking down a typical, if small, country road, greeting an elderly woman protecting her head from the sunlight with a slight bow. There’s something different about the air here, a very subtle change I don’t notice right away, but it seems heavier, slightly smoky, even sulfuric. But only on occasion when the wind shifts. A huge bamboo forest sits to my left, another approaching on the right. The wind catches the stalks just right, and I listen. I hear the bamboo swaying. I hear locusts, dragonflies preying. Even the infrequent peacock crow, which sounds different when they’re wild: a strange, straggled yell. 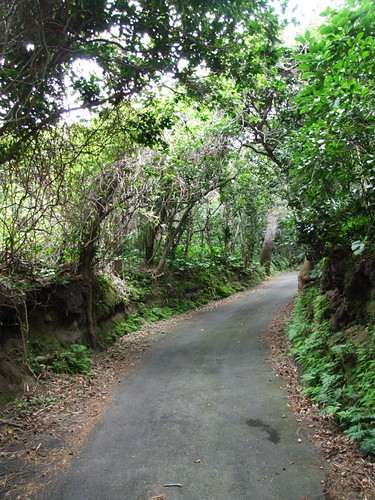 But what get my attention are the drums. In the distance, with a regular beat, I almost feel as though I’m about to be overrun by ancient native islanders bearing spears. Instead, I feel content knowing, for the moment anyway, my life has its own theme music. The quickening of my steps, the banging of the drums. Louder. Softer. Stop. Start. And again, till the island learns my pace, or I its rhythm.

After a few kilometers, the forest thickens. The sun is now my neighbor, trapped behind the fence of a western mountaintop. And I trudge.

To the east, where the Heike Castle once stood. But where the rest of Nippon might have a wooden gate, stone walls, or at least a foundation, nothing remains on Ioujima. The only reward for your perseverance is the view of the ever-smoking volcano Ioudake (硫黄岳), piles of sulfur clearly burning beyond the borders of the bamboo population.

To the west, where a descent leads you right to a natural hot springs on the rocky shores of the small Mishima (三島) island. The waters of Sakamoto Onsen (坂本温泉) can be dangerous if not cooled by the rising ocean tide, the pool slimy from lack of use. But in its prime, it’s clear this attraction will beckon you. Lie and soak. Listen to the waves crashing. There is nothing else in this world but that which exists for you, and only you.

And if it’s possible to feel even more relaxed, make your way southeast, in the narrow valley between Ioudake and Inamuradake (稲村岳). Take the road through a sea of bamboo until you hear water in the distance, the sea looming before you. Higashi Onsen (東温泉). A more natural hot springs there could not be, the only reminders of civilization a concrete walking path and a long-derelict stone structure. But the baths, the minerals, the sulfur, coursing through your skin, diving into every crevasse, purifying your very essence. All from three onsen baths, each hotter than the next. Arrive at sunrise. Look between the sheer rock faces less than a hundred meters away. Let your body give in to the absolution of the water, your ears comforted by the soothing sounds of sea foam. Japan at its finest. Onsen at its best.

Before I know it, the horn warning of an approaching ship is sounding, the passenger gangway is mounted, and my feet force themselves to walk towards the means back to “civilization”. But this is not before a kind stranger, seeing me parched, offers me a drink of the local Djembe Tea, my hostess comes to bid her guests farewell, and the Osaka real estate agents on vacation load up their diving gear for the last time. It’s all too familiar to one who truly lives for the weekend getaways.

There were children, just as happy and wide-eyed as could be, staring back at me from the shores of Takeshima (竹島) as I returned on that sunny day. I never thought… these islands seem like the places small-town people come to get away, but even here, where the population consists of fewer than two hundred people, there are families, children, elderly… all content within the confines of a few kilometers roaming space. Incredible.

So what about Ioujima? It’s accessible, it’s cheap, and it’s small. But more than convenience, it has culture, sights, sounds, smells, tastes that should not go untouched. Visit this island not just of sulfur, but of wonders.

These islands are particularly famous for diving opportunities, but various yachting races occur as well, the largest of which is the Mishima Cup (ミシマカップﾖｯﾄﾚｰｽ), which was held on August 4th this year.

I wasn’t just imagining those drum sounds in some hallucinogenic state. Ioujima is home to the Tam Tam Mandingue Japan Djembe School (ジャンベスクール). From the South Pier in Kagoshima, take the 9:30 AM ferry to the Mishima islands, leaving on select days. It takes two hours fifty minutes to reach Takeshima, another forty-five minutes and you’ll be on Ioujima.  ￥7,000 round trip.