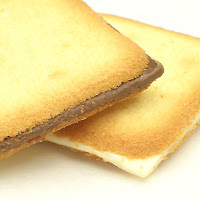 I admit I can come across as ambiguous at times. Issues are not always so black and white for me, and it takes time and research to come to a firm conclusion.

Not this time. You mess with my chocolate snacks, and there’s going to be war. I don’t care what they did, who they killed, how many old ladies they knocked over, if they’re hiding Osama bin Laden: if the chocolate tastes as moist and sweet as it did before, all the better.

Shiroi Koibito (白い恋人, White Lovers) chocolate in Hokkaido is the best in Japan, undisputed. Anyone who tells you otherwise has not tried it, or has faulty taste buds.

Imagine if you will, a cold February day on the powdered streets of Sapporo. The sun is long absent, the sky a grey contrasting with the pure white of the snowy earth.

I’m sitting rather frigidly on a bench sculpted from a huge block of ice. Looking at my surroundings, however, this should come as no surprise; a walrus with whiskers the length of a small boy is left with an eternal smile; a peacock has its feathers raised, though nothing that could be considered a predator is nearby; a young girl runs ahead of her parents and falls spectacularly in a multicolored heap.

The last days of the Sapporo Snow Festival (札幌雪まつり) are upon us. With the images of junior high schooler snowball fights freshly burned into my mind, as well as my camera, I’m taking one of many opportunities to relax and watch life pass me by.

But what is a show without a little snack? Two things come immediately to mind: chocolate and warm chocolate. Shiroi Koibito chocolate snack cookies… fresh milk chocolate poured delicately between two thin sugary wafers, the combined taste of which is enough to bring strong men to their knees in the overwhelming onset of flavor; sugary yet still sweeter, creamy yet perfectly flaky, and perfectly soft, allowing the cookie to pass through my teeth of its own accord, instead of the other way around.

To drink? Nothing less than the chocolate drink of Ishiya, a liquid smoother and more delicious than any hot chocolate in existence.

As you may have guessed, I have strong feelings about what I put in my stomach. Which is why I was a little disheartened to read that the chocolate has not been available to buy since August, in response to a “scandal” that occurred when Ishiya changed their expiration dates to extend shelf life

It doesn’t matter. That chocolate is consumed so quickly and in such vast quantities I doubt any piece has ever approached the expiration date. Unfortunately, the government cannot understand the scrumptious delights of Shiroi Koibito, and have effecively delayed sales until Nov 22nd

“Ishiya’s products may be popular, but its conduct has been extremely sloppy.”

Incidentally, if Ishiya is willing to sponsor this blog by renewing my traveling spirit with free samples, I wouldn’t say no… Think about it… “Keeping Pace in Japan, powered by Ishiya Shiroi Koibito chocolate”… It may not raise much cash, but the sentimental value will soar.

Either way, if there are any souls in Hokkaido who happen to be making their way south, I’ll gladly pay for some.