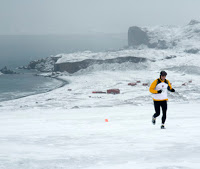 26.2 miles. 42.195 kilometers. It’s difficult enough as it as. Now could you imagine being one of the few people who’ve managed it across seven continents? After Tokyo, I believe I’ll see if there’s a way to “run” through the International Space Station, or gather enough wealthy sponsors to have the first person on Mars start running for three hours… “That’s one small step for man, I’ll see you suckers at the finish.”

“You will come face to face with icebergs, penguins, seals and whales while exploring the most pristine corner of the planet. Historians and scientists will provide lectures on board ship and wildlife excursions during landings in remote areas among seal colonies and penguin rookeries and at research bases.”

Believe it or not, the 2008 and 2009 races are currently sold out (not that they had too many seats to begin with), but you can be put on a standby list. Temperatures range from 15-30 degrees Fahrenheit minus wind chill. The price? About USD$6000-7000 for packages from Miami.

However, if you’re interested in a different way to “get Antarctica”, read on. I thought this story on Brave New Traveler was pretty interesting, but have yet to encounter anyone in Japan going for it (or who’ve even heard of it). Kudos Madeleine Somerville, and FYI, there are three people who have been born in Antarctica…

“Emilio Marcos Palma was the first child born in Antarctica, January 7, 1978. Because he was born to Argentine parents on the Argentine Base Esperanza, near the tip of the Antarctic peninsula, he was declared an Argentine citizen. His unusual birthplace has brought Marcos a visit from Prince Andres of Holland, letters from presidents around the world, and an invitation to Antarctic Treaty meetings. In 1986 Juan Pablo Camacho was born at the Presidente Eduardo Frei Montalva Base, becoming the first Chilean born in Antarctica. Soon after a girl, named Gisella, was born at the same station. Eduardo Frei and Esperanza bases are the only ones in Antarctica with families living year round. The most recent population numbers available included 13 families at Eduardo Frei with 17 children younger than 14 and 10 families at Esperanza with 21 children. Most of the children living there now were born elsewhere.”

All in a decent age range… Look them up, and start working your game.