Let’s keep this simple, shall we?

1. NOVA was broke and expected to file for bankruptcy
2. NOVA was broke and filed for bankruptcy
3. NOVA President Nozomu Sahashi is in the wind, following his unexplained absence at an emergency board meeting
4. There are approximately 4,000 unemployed foreign teachers in Japan, low on funds and with limited time for housing
5. The company’s debt totals 43.9 billion yen

Nova Corp., Japan’s largest language school chain, filed for bankruptcy Friday with estimated debts of about ¥43.9 billion as it failed to recover from a crippling penalty for false advertising.

Osaka-based Nova said it applied for protection from creditors under the Corporate Rehabilitation Law with the Osaka District Court, and pledged to find a sponsor for rehabilitation under the supervision of a court-appointed administrator. The court accepted the application.

The Jasdaq Securities Exchange said Nova’s stock has been suspended from trading and will be delisted on Nov. 27.

The company, offering mainly English conversation classes to an estimated 420,000 students nationwide, said it has shut down all its schools, and Nova President Nozomu Sahashi, who has a 16 percent stake in the company, is nowhere to be found.

– For those in the Tokyo area, there will be a meeting to discuss options at 7 PM on October 28th at the National Union of General Worker’s headquarters in Shimbashi

– For Australian citizens, be sure to look at this official notice issued by the Australian Government in response to NOVA’s recent annoucement

– For those in semi-stable positions who still want to stay in Japan, be sure to check out Gaijinpot

– For those in the Kagoshima or Miyazaki area, feel free to email me if you need emergency housing

To get your mind off things…

Submit to me your own graphic version of just how the NOVA bunny should commit suicide: 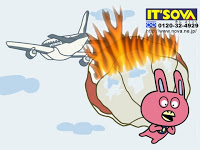 Courtesy of News on Japan