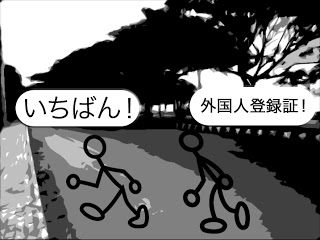 Tokyo’s Finest in Training for February Marathon
by Trent Steel

With the participants of the 2nd annual Tokyo Marathon arriving in less than three months, there has been an unusual rise in the number of city officials competing for the pride of Japan, in particular police officers.

Such diversity did not go unnoticed by Tokyo’s own keisatsu (警察, police), who, this year, are coming out uniformed, organized, and ready to run.

“We thought an international race like this one would be the perfect opportunity to perform routine checks (ルーティンチェック),” said one official who chose to remain anonymous. “With so many dangerous gaijin penetrating some of the most valued residential and commercial areas, we must look out for the welfare of our citizens.”

In response to how such actions might sit with permanent residents and those who have lived in Japan long enough to obtain citizenship, he countered with a small laugh:

“This is Japan. They are not Japanese. With so many gaijin running and carrying nothing but energy gel packs, we have the chance to detain those who can’t present their passports or gaikokujin torokusho (外国人登録証, “gaijin cards”, which foreign residents of Japan are required by law to have with them at all times).

“We would have attempted this at last year’s marathon, but weren’t prepared for such a great distance. This time, after months of training, we should be able to catch at least a few hundred of them.”

The police in Japan are within their rights to request proof of residence from any non-Japanese citizen, but only “if based on a reasonable judgment of a situation where the policeman sees some strange conduct and some crime is being committed, or else he has enough reason to suspect (疑うに足りる相当な理由) that a person will or has committed a crime…” Police Execution of Duties Law Section 2. In other words, probable cause.

Officer “Yamamoto”, as he chose not to reveal his real name, said this was an easy fix:

“We are allowed to stop gaijin based on suspicious behavior. What could be more suspicious than running from the police at full speed? What are they trying to hide?”

Full speed indeed. With Daniel Njenga of Kenya having come in at a respectable time of 2:09:45 in last year’s event, we will certainly see the resolve of these men tested.