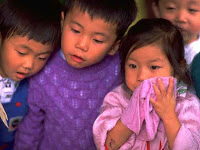 I’ve run kilometers on end. I work out regularly. I can hold my own in a fight. Adrenaline and I are close friends.

And yet, I recently found myself beyond my natural limits, all in response to the saddened look on a six-year-old girl’s face. Pushed to the point of exhaustion and tired from lifting her up with enthusiasm, shouting like a crazy man, and making her “fly” around a gym for over forty laps.

“もう一回!” (one more time!) she exclaimed, her expression quickly transforming from delight to slight disappointment that I had set her down after another ten minutes of flight. “高い!” (up high!)

“オーケー,” I said between dry heaves. I mean, how do you say no? Is it even possible to do so without feeling lousy?

The girl in the blue shirt and pink dress (both thankfully lacking an obscene English expression) is Haruka. Officially, Haruka is a “child who requires protection” according to Japanese law: an illegitimate child, an abandoned infant, a child whose parents have died or disappeared, a child whose parents are incapable of providing support, or an abused child (Source).

I don’t know her story, where her parents are, or what her future holds. All I can see in the present is bringing a moment of happiness to her life.

A group of volunteers and I made our way to Aira in Kagoshima prefecture to visit this particular orphanage (though the term isn’t exact) for the annual Christmas party: setting up an xmas tree, decorating the room with crafts, small English lessons, playing ball and running around the gymnasium until some of us (hint, hint) pass out from “fun”.

I first saw her apart from the three or four boys screaming and trying to get a soccer ball into the basketball hoop, sitting alone, legs together, her head between her knees, arms crossed over her head. When she happened to look up to avoid an accidental collision, there was no joy written on her face. No love. No hope. I am by no means an expert, but she had every indication of someone being written off.

Sadly enough, that’s usually the case in Japan (well, many countries) for the children in these centers. Although their quality of life is far from impoverished – school, meals, TV, warm futons, entertainment provided – the chances of their being “rescued” and returned to a caring family are slim to none. “An estimated 65,000 adoptions of unrelated children occur each year in the United States. The official number in Japan is about 600.” (Source

Extended family ties are strong in Japan, and relatives often care for each other’s children when the need arises. But when that is not possible – for financial or other reasons – many relatives would rather see these children in state homes than adopted by strangers.

Many Japanese view their families as a privileged, almost sacred group. Western families, particularly American ones, are seen by Japanese as careless with that privilege. In their view, American families often start out of wedlock, end in divorce and often accept a stranger’s child as their own through adoption. In Japan, millions of people see these actions as scandalous, or at the least, not to be discussed in public.

Kazuko Yokota, who runs Motherly Network, a private adoption agency, said she believed doctors quietly help broker the adoptions of ”hundreds of children” each year. ”It’s all done in secret,” she said. ”Adoption is not the Japanese way.” As a result, she said, some people go to great lengths – even moving to a place where they are not known, and feigning pregnancies with pillows – to conceal an adoption.

Part of the reason for this is the existence of the koseki (戸籍), or family registry. If you’re a Japanese citizen, you have a koseki. It is the record of records. Family history. Mothers. Fathers. And, all births…

A law enacted in 1988 allowed young adopted children to have their birth family name erased from their koseki and replaced by their adoptive family’s name. Before this, both names were listed, which essentially meant ”adopted” was stamped in bold letters on this important record. The new law was meant to make it easier for families to adopt nonrelatives without fear of stigma.

Such was the case for single Japanese mothers who chose to give their children up for adoption – the names stood on the koseki, and that was seen as more of a stigma than anything else, visible to employers, potential husbands, even friends.

And what of the children of foreign mothers, or fathers? Institutions see no shortage of them; plenty of their parents come over here on short-term work visas and surrender their rights to any offspring when departing. “Halfs” – I don’t particularly like that term, but it is common enough – as half Japanese/half non-Japanese, are even less likely to be adopted, as they couldn’t possibly be passed off as the biological children of parents trying to feign pregnancies, thus avoiding the explanations and possible shunning of the child later on.

Slightly off topic, in cases of foreign fathers and Japanese mothers… in the event children are born outside of wedlock, custody is automatically awarded to the mother. If married and then divorced, custody can only lie with one parent – it is at the discretion of this one that the other is allowed visitation. (Source).

This is major factor behind these international kidnappings in Japan; although a father might be awarded joint custody in another country, Japanese law does not recognize it as such. Even if both live in Japan and have an unspoken agreement on custody, the mother can just as easily pack up and leave without bothering with a forwarding address. Although a court might recognize the rights of one parent to see his child, it is unable to remove that same child from the custody of the other to allow visitation (Source); this is the same mentality we see regarding the UN code against racial discrimination in Japan; Japan has confirmed that it is bound by such a code, yet unable to make such laws to enforce it…

I digress, but it all comes to parental rights: who can adopt, who can give children up for adoption, what children are out there waiting to be adopted…

And it helps to see them up close. Even Haruka, who might have been shifted from institution to institution since birth, is capable of joy when the moment strikes. I didn’t see these children as any different as those walking down the street returning from a junior high school, on their way home to, hopefully, caring parents.

It’s still difficult. To imagine what it’s like without a real home. One of the volunteers is literally in tears as we pull away, bidding farewell to the staff and thanking them for the opportunity to visit. We can escape. We can return to our apartments, Skype our parents, and continue on with our lives. They will wake up, go to school, and return to a place not unlike school, where they will most likely live for the next few years, until reaching 18 or 20.

We saw one day. One atypical day. They live it for years. It’s not horrible, it’s not cruel, but it can’t be what’s best; even a mother shouting and screaming for ten minutes because you forgot to call home is a sign of love. Something that just can’t just duplicated without a home, a family.